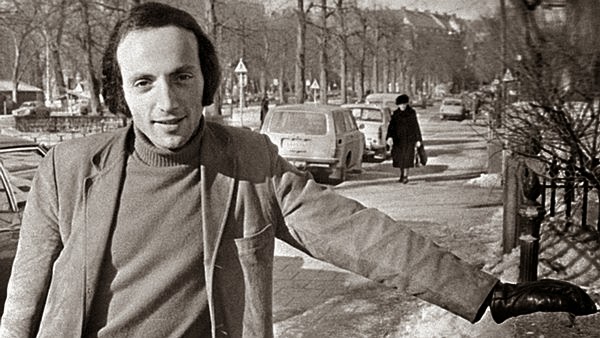 Erich Segal (1937-2010) was born in Brooklyn, New York, the son of a rabbi.  He graduated from Harvard as class poet and Latin Salutatorian in 1958, at the age of 21.  He got his Masters the following year and his PhD in 1965, at which point he became an associate professor of classics and comparative literature at Yale University.

Segal's oeuvre is strangely dissonant.  Putting aside an off-broadway musical from 1960 (Sing Muse!), his writing career launched at about the same time as his academic career, in 1968.  Over the next three years his projects included Roman Laughter: The Comedy of Plautus (a scholarly work on the author), the screenplay for Yellow Submarine (1968), editing Euripides: A Collection of Critical Essays (1968) and Plautus: Three Comedies (1969), the novel and screenplay for Love Story (1970), as well as two other screenplays (The Games and R.P.M., both 1970).  This eclecticism led Newsweek to refer to him as "the most successful translator of Plato and Plautus who ever wrote junk fiction."

Segal married Karen Marianne James in 1975 with whom he had two daughters.  Segal suffered from Parkinson's Disease since the mid-1980s, but continued to teach through the early 90s and to write after that.  His last work, The Death of Comedy (a scholarly history of theatrical comedy from the ancient Greeks up to Samuel Beckett), was published in 2001. 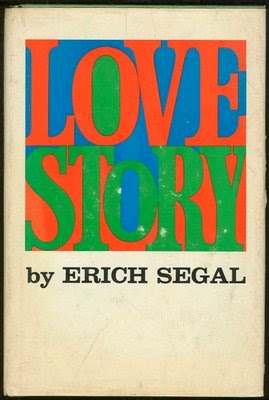 Love Story focuses on the relationship between Oliver Barrett IV and Jenny Cavilleri.  Oliver is the prodigy of a long line of wealthy and successful Harvard alumni and is himself an exceptional student and star hockey player.  Jenny is a smart and outspoken Radcliffe student, the daughter of a poor baker.  The two meet and fall in love, and get married, and it's all very sweet. However, the novel's first line is "What can you say about a twenty-five-year-old girl who died?"  So, we know she's going to die by the end, which should add a level of poignancy to the novel, except for the fact that Oliver, who's narrating the story, seems to forget this fact for long stretches of time.

Love Story is surprisingly hard to review because it is so firmly entrenched in the romance genre.  As a romance, it works.  It hits all the right marks, doesn't stray too far from formula, and manages to be generally sincere.  But that said, it relies on the conventions of its genre to such an extent that the story collapses when you remove those assumptions.  For example, Oliver Barrett IV resents his father.  We're told his father is combative and self-centered, etc. etc., but when we see him, the worst that can be said is that he's aloof.  Oliver resents his father for expecting him (Oliver) to be a good student and athlete, despite the fact that Oliver is a good student and athlete and even enjoys being a good student and athlete.  But Oliver's the romantic lead, and since he's rich he has to resent his father, even if he's not given a reason to do so.

While I realize love-at-first-sight may be a staple of romance, it's frustrating for someone who isn't a fan of the genre.  They fall in love very quickly, but I'm really not sure what they saw in each other.  I guess that may be part of what made the novel so popular is its characters' ability to function as reader-surrogates.

My copy is the 1970 book club edition, and on the inside of the book jacket is the following blurb:
"Unlike most contemporary fiction dealing with young people, Love Story makes no claim to showing where it's at. Rather, it simply shows how it feels."
I think this illustrates a bit of my frustration with the novel.  The characters are living in a bubble, with no real issues or connections to the culture around them, instead focusing on vague abstractions of their feelings for each other which get repetitive. 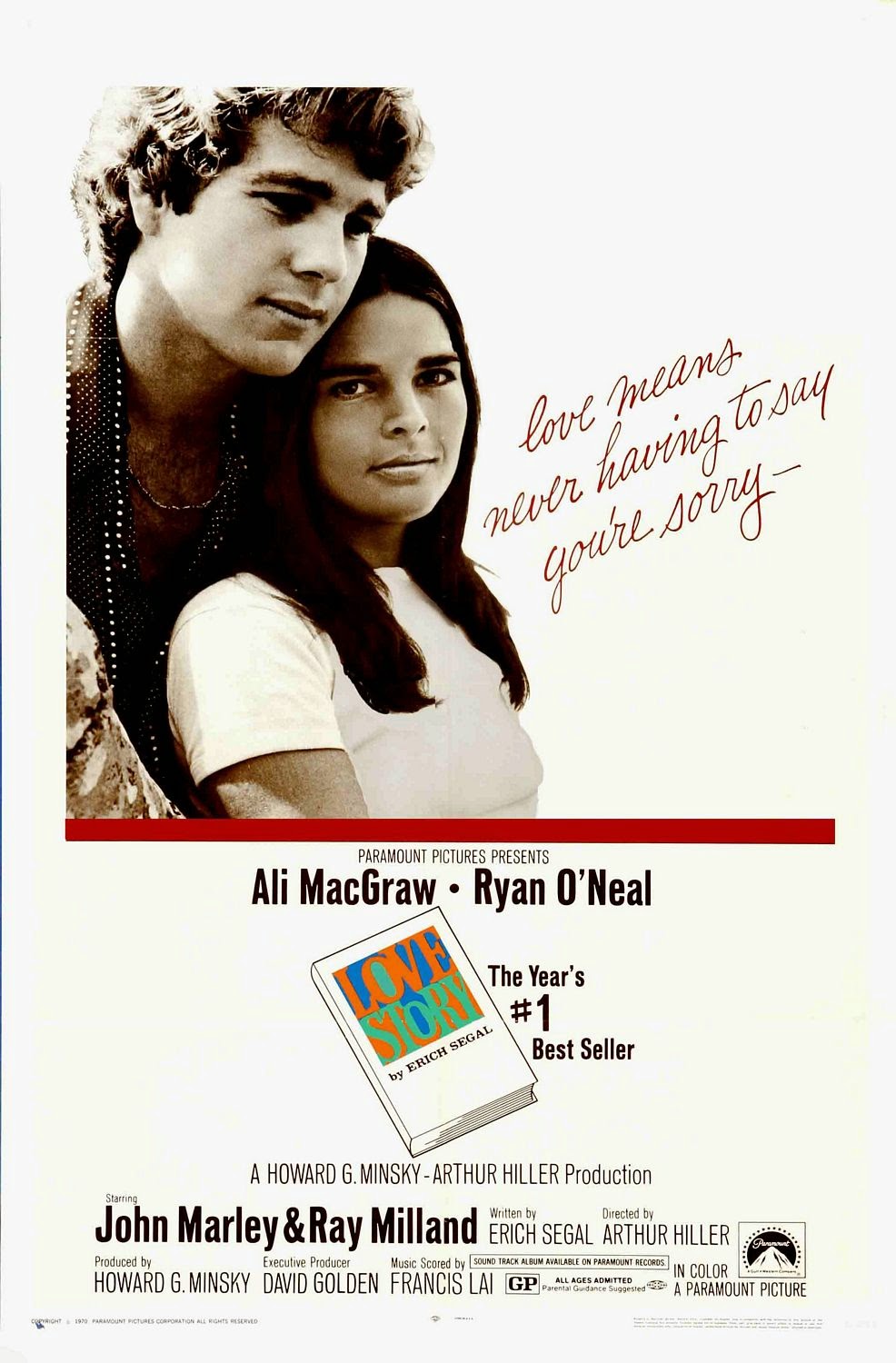 In the author section, I mentioned that the film was nominated for best original screenplay, even though the movie was released after the novel.  After film production began, Paramount requested that Segal write a novel version of the script to help drum up interest in the movie.  Sections of the book were published in The Ladies' Home Journal prior to the Valentines Day release of the novel.

In my research of the novel, I found that Al Gore claimed to be the inspiration for Oliver Barrett IV.  He was a Harvard student in 1968 when Segal was there on sabbatical.  Segal responded that this was partially true. The family background and pressure to succeed were based on Gore.  The "tough, macho guy who's a poet at heart" part of the character was based on Gore's roommate at the time, Tommy Lee Jones (who's first film credit happens to be Love Story).

If you're a fan of the romance genre, you'll probably like Love Story.  If you're not, you probably won't.

1. Love Story by Erich Segal
2. The French Lieutenant's Woman by John Fowles
3. Islands in the Stream by Ernest Hemingway
4. The Crystal Cave by Mary Stewart
5. Great Lion of God by Taylor Caldwell
6. QB VII by Leon Uris
7. The Gang That Couldn't Shoot Straight by Jimmy Breslin
8. The Secret Woman by Victoria Holt
9. Travels with My Aunt by Graham Greene
10. Rich Man, Poor Man by Irwin Shaw

Judy Blume - Are You There, God? It's Me, Margaret
Dee Brown - Bury My Heart at Wounded Knee
Toni Morrison - The Bluest Eye
Larry Niven - Ringworld

A lot of awesome things don't work together.  But every now and then, someone thinks to combine two amazing, unrelated things that no one would expect to go together.  Two things like early nineteenth Century poet Percy Bysshe Shelley and AMC crime drama Breaking Bad.

Philip Roth (1933-    ) was born in the Weequahic neighborhood in Newark, New Jersey, and was the son of first-generation Eastern-European Jewish immigrants.  He graduated Weequahic High School in 1950, and went on to receive a degree in English from Brucknell University.  From there, he received his Masters in Literature from the University of Chicago in 1955.  He met Margaret Martinson the following year, and married her in 1959. During this time, he taught college English courses at institutions including the University of Chicago, University of Iowa, and later Princeton University and the University of Pennsylvania.

In 1959, he published his first book, Goodbye, Columbus, a collection of five stories and a novella, which received considerable critical and popular acclaim, and won the National Book Award.  Roth and Martinson split up in 1963.  Roth's next to novels, Letting Go (1962) and When She Was Good (1967), were given less attention than his first book.  Then he published Portnoy's Complaint. The explicit masturbation throughout the novel made the book incredibly controversial: the book was banned in many U.S. libraries and Australia declared the importation of the book to be illegal.  This made Roth a public figure in a way he'd never been before.

In 1990, Roth married his long-time partner, Claire Bloom.  The two split up in 1994, and Bloom published an unflattering memoir of their relationship, titled Leaving a Doll's House.  Roth's novel I Married a Communist (1998) is seen as being partially based on, and in refutation to, Bloom's accusations.

Portnoy's Complaint, as defined by the novels de facto preface:
"A disorder in which strongly-felt ethical and altruistic impulses are perpetually warring with extreme sexual longings, often of a perverse nature... neither fantasy nor act issues in genuine sexual gratification, but rather in overrideing feelings of shame and the dread of retribution."

The eponymous Alexander Portnoy, like Roth, is the son of Jewish parents living in a Jewish community in Newark.  The story is told as a long monologue, delivered by Portnoy to his psychoanalyst, Dr. Spielvogel. The novel focuses on Portnoy's attempts to reconcile or move past his ethnic background as a twentieth-century American, and his sexual development and obsessions, and how the former affects the latter.

Portnoy is critical of his Jewish culture in the novel, in a way that is self-aware and very frank.  He points out many hypocrisies and idiosyncrasies of Jewish American culture, all of which are exhibited by Portnoy's family.  Portnoy declares "This is my life, my only life, and I'm living it in the middle of a Jewish joke!  I am the son in a Jewish joke -- only it ain't no joke!" (39-40).  The Jewish mother stereotype is the most prevalent, with Portnoy's mother alternately lavishing praise on young Alexander and disowning him for any failures.

This last plays into the psychoanalysis aspect of the story, where many of the tropes of psychoanalytic theory (e.g. "Tell me about your mother...") blown to ridiculous proportions.

Through this relationship, Porntoy's background (as a Jew dating a shikse), his sexual obsessions, and his current status (as a successful lawyer-turned-public-figure dating a semi-literate former model) come to a head and lead to near catastrophe.

1. Portnoy's Complaint by Philip Roth
2. The Godfather by Mario Puzo
3. The Love Machine by Jacqueline Susann
4. The Inheritors by Harold Robbins
5. The Andromeda Strain by Michael Crichton
6. The Seven Minutes by Irving Wallace
7. Naked Came the Stranger by Penelope Ashe
8. The Promise by Chaim Potok
9. The Pretenders by Gwen Davis
10. The House on the Strand by Daphne du Maurier