1914: The Eyes of the World by Harold Bell Wright

This is Harold Bell Wright, one of the most financially successful authors of the early twentieth century. 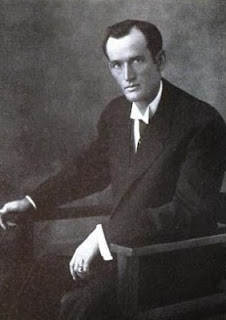 Harold Bell Wright (1872-1944) was born in Rome, New York.  After being orphaned at the age of ten, he worked on a farm, and later took up house painting and other odd jobs to survive.  Despite never being taught in a seminary or religious institution, Wright became a preacher.   He rarely spent more than a couple years with any one congregation, moving back and forth between Kansas, Missouri, and California.  He was a preaching in Pittsburg, Kansas when he wrote his first novel, That Printer of Udell’s.  The novel only saw publication due to a chance meeting between Wright and a man named Elsbery W. Reynolds.  Reynolds, a mail-order bookseller, met Wright at a religious revival event in Chicago.  Reynolds published That Printer of Udell’s to moderate success.  Likewise, he printed Wright’s second novel, The Shepherd of the Hills, with a fair degree of success.  After the publication of his second novel, Wright retired from preaching and, with Reynolds help, became one of the most successful novelists America had ever seen.

So what's this book about?

The Eyes of the World is the story of a young painter named Aaron King, who heads out west to California.  There, he meets and befriends Conrad Lagrange, a famous and critically renowned novelist who, by his own admission, writes “the putrid offal that self-respecting writers reject.”  The plot revolves around whether Aaron will flatter the rich and powerful men and women who control the art world, or keep his integrity as an artist.  Meanwhile, he falls in love with a free-spirited girl named Sybil.

The story is a feel-good morality tale.  Nothing surprising or original is attempted, let alone accomplished.  While simple, morally uplifting stories always have their place, The Eyes of the World is a mess.  For one thing, it frequently loses focus, giving the reader thirty page descriptions of the San Bernardino mountains apropos of nothing.  From the beginning of the story we can guess where the characters are going to end up.  Yet they still take a long time to get there.

More problematic than the lack of cohesion is the general weirdness of the characters.  To put it simply, they do not act like human beings.  Then again, perhaps they weren’t meant to.  Each character represents some aspect of society.  Lagrange explains this early on in the novel, telling Aaron that he would like to write a novel in which all the people around him are named for what they represent.  Thus Aaron King is Art, Lagrange is Civilization, Sybil is Nature.  The cast features others, including Lust, Materialism, The Age, and Symbol.  According to Frank Mott’s history of bestsellers, “Up to the last typing of The Eyes of the World, no character had been given any name except that of his or her chief quality.”  Every action a character makes seems to be based solely on how well it represents what the character represents.  Hence, Sybil/Nature is unpredictable, constantly running around and singing.  Does telling someone to avert their eyes so you can secretly weave them a basket sound like something a normal person would do?  Of course not, but Sybil isn’t a normal person.  Today, we’d call her a manic pixie dream girl.

Morally simplistic stories with mediocre writing have always had a space in the public’s interest.  But The Eyes of the World was a huge financial success.  Of the thirteen books of the 1910’s to sell a number of copies equal to at least one percent of the U.S. population, three were by Wright, putting him in the company of classics like Tarzan of the Apes (Burroughs), Penrod (Tarkington), and The Riders of the Purple Sage (Grey).  How did he manage this?

Harold Wright and Elsbery Reynolds were great at one thing: advertising.  After the moderate success of his first two novels, Wright's third book, The Calling of Dan Matthews, was given an advertising budget of $48,000.  Approximately $1,200,000 in today’s currency.  Mott writes, "Though strong book advertising had been fairly common for several years, these figure were nothing less than revolutionary.  Full-page advertisements in the newspapers not only announced the new book but also promoted his its two predecessors."  The Eyes of the World received an advertising budget of $100,000, approximately $2,250,000 in today’s currency.

Critics were also talking about Wright's books.  Since the publication of The Calling of Dan Matthews in 1909, rarely did a critic say anything nicer than a backhanded compliment.  From The Bookman's review of Dan Matthews:

It is precisely the sort of book which the readers who like this author's previous volumes may reasonably be expected to enjoy.   That it has no special structural merit, no special distinction of style is quite beside the point.

In its review of The Winning of Barbara Worth (1911), the New York Times wrote:

Mr. Wright had a big theme before him, but he has handled it in a commonplace, amateurish way.  The story, however, is better in construction, more closely and smoothly knit together than his previous novels.

Publishers Weekly wrote of The Eyes of the World:

The story has the elements which make for popularity.

After World War One, Wright’s book sales dropped and Elsbery Reynolds dissolved their partnership.  He turned his attention to other endeavors, but kept writing, publishing nine novels and an autobiography between  1921 and 1942.  Two of his novels were turned into successful movies: The Winning of Barbara Worth starring Gary Cooper in 1926, and The Shepherd of the Hills starring John Wayne in 1941.  Neither have remained notably popular.

I wouldn’t recommend it.  Simply put, it’s not very good.


Also published in 1914:
Dubliners by James Joyce
Tarzan of the Apes by Edgar Rice Burroughs

You can read The Eyes of the World on Project Gutenberg.

Email ThisBlogThis!Share to TwitterShare to FacebookShare to Pinterest
Labels: 100, 1914, 94, annual, best seller, bestseller, book, criticism, fiction, harold bell wright, literature, novel, review, the eyes of the world, the shepherd of the hills, the winning of barbara worth