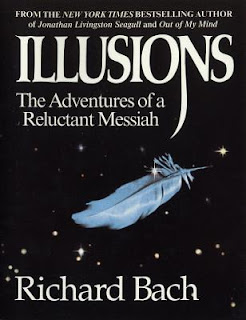 Richard Bach is a pop-philosophy sponge who soaked up the 1970s and wrung it out into a bucket of platitudes.  If Ayn Rand, the Dalai Lama, Plato, and Billy Graham went to Philip K. Dick's house, took all his drugs, and wrote a book together, that... would actually be pretty awesome.  But if that book were then rewritten for people who have never come into contact with any aspect of philosophy, theology, or metaphysics besides a high school civics class, you'd end up with Illusions (1977).

The protagonist is a fictionalized version of Bach himself, who's now making a living traveling from town to town on his biplane, giving people rides for a few dollars a head.  In a field, he comes across another man doing the same thing, one Daniel Shimoda, who it turns out is the Messiah, but, as the full title (Illusions: The Adventure of a Reluctant Messiah) suggests, he's none too happy with the gig.  Nevertheless, he teaches Bach what he knows.  Basically, the universe is all an illusion, and we exist in some other truer reality (like Plato's theory of the forms), although there is an monotheistic god in this cosmology, and we tend to be reincarnated into many different lives, and also we can control 'reality' if we accept that it's an illusion (like the spoon-bending scene in the Matrix), oh, and you're only duty is to be true to yourself and seek your own peace and happiness, even if that means hurting other people.  Yeah, when Bach tries to argue that you should pursue your own happiness as long as you don't hurt others, Shimoda conjures up an illusion of a vampire who needs Bach's blood to survive in order to prove Bach's point wrong while simultaneously dodging the serious implications of this philosophy.

This isn't my first exposure to Bach's brand of "philosophy."  His previous novel, Jonathon Livingston Seagull was published in 1970 and became the bestselling novel in the US for the years of 1972-3. While that was an excruciatingly didactic fable, Illusions is more or less a string of excruciatingly didactic lectures, interspersed with excerpts from the Messiah's Handbook: Reminders for the Advanced Soul.  This handbook is a collection of aphorisms that are equal parts pithy, inspirational, and vague, balanced in such a way that they appear profound if you don't actually think about them.

"Learning is finding out what you already know.  Doing is demonstrating that you know it."

"You teach best what you most need to learn."

Bach got himself a reputation as a spiritual guru with a massive fanbase for Jonathan Livingston Seagull, and he followed it up with Illusions.  It's popular for the same reason inspirational posters and feel good sitcoms where everything always works out in the end are popular. Most of the positive reviews I see for it follow the formula of "I was in a tough place, then I read Illusions, and [insert particular aphorism her] really spoke to me!"  If you throw enough affirmations at the wall, eventually one of them will stick.

I try not to begrudge others their happiness, and nothing in this post is meant to challenge the sincerity of people's reactions towards or attachment to the novel.  If its sole purpose is to inspire people, it seems to have accomplished that.  That doesn't mean it's a good book, though, any more than an inspirational poster is good photography.