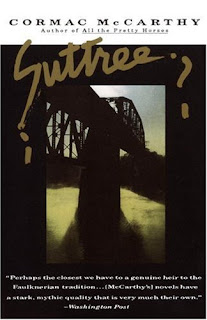 I'd previously read The Road (2006) and Blood Meridian (1985), and had never even heard of Suttree (1979).  While some of his more popular novels like The Road and No Country for Old Men (2005) were published after the list was compiled, I do find it surprising that Suttree made it on the list, as opposed to All the Pretty Horses.  (Blood Meridian made it on the readers' list at #54.)

One of the frequent opinions I've found about Suttree, including one voiced on the back cover of the Vintage trade paperback edition, is that this is McCarthy's funniest novel.  From my limited knowledge of his oeuvre, this is true.  The story primarily focuses on a man named Cornelius Suttree, from a good family but now residing in a delapidated houseboat on the river in the poor part of Knoxville in the early 1950s.  While some of the situations he gets involved in are darkly or poignantly humorous, the main source of comedy is one Gene Harrogate, who befriends Suttree at the workhouse early on in the novel.  Harrogate, a diminutive eighteen year old, is in jail for an unusual crime.  As the man who pressed charges remarked to a friend, "Somebody has been fuckin my watermelons."  This is not obscure Southern slang.  Harrogate, our "moonlit melonmounter," is a weird fellow, always cooking up kooky schemes and paying the price.  But this is a McCarthy novel, so it's never too lighthearted.  His idea of slapstick, for instance, includes being bitten by a legless beggar.

But the main focus is on Suttree, friend to the outcast and destitute of Knoxville.  The novel is episodic, emphasizing the somewhat monotonous recurrence of events in the type of life Suttree leads, which only adds strength the the inevitable changes that do occur.  I think one of the reasons that this novel is so popular is that it's easy to be enamored of Suttree's life, despite its hardships.  The amount of freedom in the beatnik sense, the lack of obligations, these are all enticing, often enticing enough to overlook the squalor, the frequent violent altercations and arrests, the starving children always showing up on the periphery of the scenes.   There's discussion of the semi-autobiographical nature of this novel, as there are many similarities between Suttree and McCarthy, who lived in Knoxville at the time the novel takes place, which may account for some of the sense of nostalgia that pervades the atmosphere.

Suttree seemed a bit of a slog at times, and I had to refer to a dictionary far more often than I usually do, but overall I'd recommend it if you like McCarthy's style.