Or, Crossing the Threshold

So, long story short, I was thinking about doing a series where I watch and review every one of some actor's feature film oeuvre, and I ended up settling on David Cross.  He's rarely a leading man, and the quality and styles of films he's in varies drastically.  So, without further ado, Destiny Turns on the Radio: 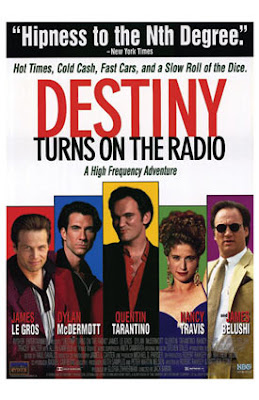 Director: Jack Baran
Runtime: 102 minutes
The movie starts with a radio news report about Julian Goddard (Dylan McDermott) escaping prison after three years of incarceration.  Apparently he pulled off a major heist before getting caught, and the money has never been found.  We see him lying passed out in the middle of the desert, where he's found by Johnny Destiny (Quentin Tarantino), who gives him a ride to Vegas.
He arrives at the Marilyn Motel, a run-down sleazy shack currently run by his former partner in crime, Thoreau (James Le Gros), who has some bad news:  Julian's girl, Lucille (Nancy Travis), is living with casino boss Tuerto (Jim Belushi), and the money is gone as well.  You see, after the heist, Thoreau and Goddard returned to the Marilyn Motel, only to find that Lucille had left Goddard.  Julian is determined to win her back, so he goes to find her and gets nabbed.  Meanwhile, lightning strikes the Marilyn Motel, the pool starts glowing, and out of the now-glowing depths emerges: 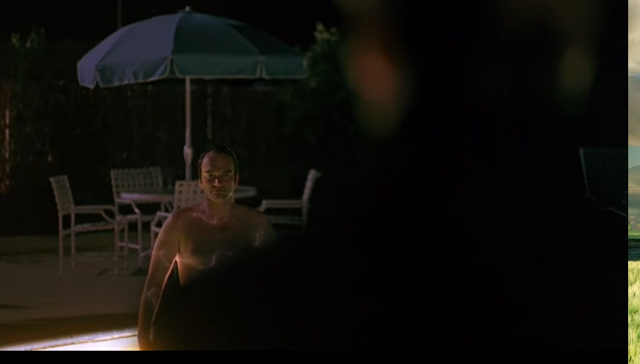 Now that I think about it, lightning striking a chintzy Vegas motel is a pretty credible origin story for Tarantino.  Anyway, the ham of the lake blasts Thoreau with a lightning bolt.  When Thoreau wakes up he discovers that his car and the money were stolen, and the pool is now empty.  He's been waiting three years for this mysterious man to return.  They both realize that this guy is Johnny Destiny, who, as is made abundantly clear very soon after, is a manifestation of pure luck.  As one woman says upon meeting him again, "I've been rolling snake-eyes ever since ya left me, Johnny." This is hardly the only instance of characters using gambling puns in all seriousness.  Thoreau's voice-over for the heist flashback remarks that, "the wheel of fortune was most certainly spinning in our favor."   Most of the dialog in this movie seems not only unnatural, but so self-consciously attempting to be clever, that it becomes simply ridiculous. Every line is delivered to the audience, not the character being spoken to, and it's very distracting.
Julian goes to win back Lucille (who's now a reasonably successful singer headlining at Belushi's casino) and hopefully find Johnny and the money.   David Cross plays Lucille's tightly strung agent from Los Angeles. 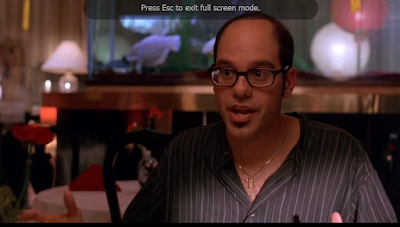 Cross has managed to get a big-time record producer to come out and see her perform.   The producer's name is Vinnie Vidivici.  Yes, he speaks in the third person.  Anyway, Lucille has mixed feelings about Julian, Johnny shows up at the Marilyn Motel to tell Thoreau to refill the pool, Bobcat Goldthwait plays an undercover cop who shows up at the motel looking for Johnny only to get knocked out and tied to the bed for most of the remaining runtime. Two detectives who look like office-workers pretending to be detectives for a halloween party try to find Julian, only to lose him when Lucille decides to run off with him.  Meanwhile, Thoreau explains what he thinks Johnny really is: a manitou, a Native American "god with a small g."  That the term 'Manitou' appears not to have been used by the tribes from that part of the continent kind of kills this theory, but whatever.  The pool, then, is a portal to a spirit realm, and at midnight, Johnny Destiny will return home, and give Thoreau and Julian their money back.
If that seemed pointlessly contrived, it turns out that Lucille is pregnant...with Julian's baby.  How?  They had sex in a dream, which he believes because he had the same dream.  This wouldn't be so bad, if the movie didn't take the whole thing so damn seriously.  Like with much of the dialog, it's clear that the writers/director thought it was very clever, rather than stilted.  Another example: Belushi complains to Lucille that she's "so cold I have to wear snowshoes to bed."  This is delivered as if it's a snappy zinger, rather than an awkward attempt at such.  Regardless, Julian and Lucille get married at an all night chapel, and Lucille is immediately kidnapped by two of Belushi's goons, who bring her to Belushi who tells her he's breaking up with her and she should leave.  Which kind of begs the question, why did he have her kidnapped?  He knows she's running off with Julian, so if he wants her out of his life, why drag her back into it?  Answer: so the cops can show up and force her to perform as scheduled that night as a trap for Julian.  Or, as one of the cops so naturally and believably phrased it, "I'm going fishin', and you are the bait."
She does the song, manages to trick the cops and escape with Julian.  They go back to the Marilyn Motel, where Johnny shows up with the money.  The portal, he explains, is to all the other possible lives you could have led.  Johnny disappears into the pool, the cops show up, Julian and Lucille jump into the pool, lightning strikes the Marilyn again, causing the pool to magically empty.  The cops leave, and we get a shot of two stars glowing in the night sky, while we hear Julian and Lucille profess their undying love for each other.
This movie was a bizarre flop.  They had a decent cast, but the dialog was like a self-referential genre parody that they were forced to play seriously throughout. (Seriously, watch the trailer.) There were plenty of moments that were funny despite themselves, and plenty of moments that were meant to be funny but simply weren't.  This movie seemed to not know what it wanted to be, so decided to be everything.  Romantic comedy?  Crime thriller?  Science fiction?  There's a lot of pseudo-philosophical pondering about luck and destiny that is trying really hard to be profound, but never gets there.  Then there's the whole Las Vegas tourism commercial aspect.  Characters are constantly talking about what makes Las Vegas so special, and what Las Vegas is, really.  The consensus, arrived at by a few different characters, is that "Las Vegas is limitless possibilities."  Which may be true for movies, at least, because it seems like 1995 was the year for Vegas flicks.  Casino, Showgirls, and Leaving Las Vegas were all released in 1995 (and Paul Thomas Anderson's Hard Eight in 1996, Vegas Vacation in 1997, and Fear and Loathing in Las Vegas in 1998).  Destiny Turns on the Radio seems to have tapped in to this Vegas mania, but without even a fraction of the success.  Even Showgirls, which was a notorious flop, earned nearly ten times as much per theater as Destiny (despite having an NC-17 rating and opening at slightly more theaters, 1,388, as opposed to Destiny's 1,126).  According to box office mojo, not only was Destiny the lowest grossing wide-release film in 1995, but, when considered per theater, it's the 29th worst performing wide release of all films since 1982 (right between Kids in America and X Games 3D The Movie).  It's currently available only on streaming and VHS.  Don't bother with either.