"Assassination Vacation" and the Reliquary of the Damned 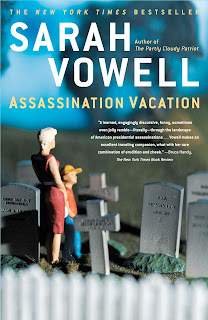 Sarah Vowell's Assassination Vacation (2005) is part pop-history and part travelogue.  Vowell sets off to visit the places associated with the Lincoln, Garfield, and McKinley assassinations, from Ford's Theater to the Mütter Museum in Philadelphia, where you can see a piece of Charles Guiteau's brain floating in a jar.  Vowell argues that the almost obsessive devotion to maintaining and visiting these sites is like a secular version of Catholic pilgrimages, that the shards of Lincoln's brain or the ominously vague "Piece of John Wilkes Booth," serve a similar function to the relics of saints.  Overall, I recommend the book, as a good introduction to the aforementioned assassinations in general, and for a wealth of detail on the tangential or minor figures attached to the event. But I have some thoughts of my own regarding her claim about the relic-like nature of the artifacts of assassination, at least regarding the assassin.

While the fallen leaders and their belongings may possess the qualities of relics, we still have to wonder why there is such a draw towards the killers.  With maybe the exception of Pontius Pilate, there isn't much lasting interest in individuals who kill holy figures.  And yet, Charles Guiteau is nearly as famous as President Garfield, and most Americans can name only one 19th century actor: John Wilkes Booth.  What makes these men so alluring, not ideologically or morally, but nevertheless drawing our attention?  Why do I know more about Leon Czolgosz than every member of McKinley's cabinet?

The power of religious relics lies in their connection to the divine, while historical relics draw their power through their connection to History.  Even if we know this to be ontologically untrue, we can't help but feel that an object's proximity to some great historical moment or personage imbues that object with some essence, preserving some tether across time and space.  We have a sense of History as an actually existing entity.  We see its motive power as "trends and forces" or "great men" or some combination thereof.  In the way that, for a pilgrim, a saint represents a closer connection to the divine forces that they believe underlie our world, a historical figure has a closer connection to natural forces that we believe underlie it.  One cures a leper, the other cures polio.  But assassins are usually the opposite of great men, and the killing is often the only notable thing about them.   They represent an unnatural disturbance of history.

In her book, Vowell describes the assassins as overturning the will of the electorate.  The trends and forces that got the person elected and the future actions of a great man are swept aside by one brief and violent action.  While our society has a prurient interest in crime and violence, the assassin is of a different class from the rest.  We hold Booth and Oswald and James Earl Ray in a different class than Al Capone or Jack the Ripper.  Because an assassin doesn't simply kill a person, they impress their will on history itself.  Booth didn't just murder Lincoln, he switched the tracks of American history. Of course, who knows how society would be different if Capone hadn't existed, or if one of the Zodiac killer's victims would have gone on to prominence.  But while we don't know how Reconstruction would have been different under Lincoln, or whether Robert Kennedy would have won the presidency in 1968, that history would be substantially different if they hadn't been killed is a certainty.  For most assassin's changing history is not just an effect of their actions, but the intent.  And the fact that someone, often a loser or a lunatic, can so drastically affect the world at large, can overturn the will of the electorate, is frightening, because it shows our beliefs in the logic and comprehensibility of history to be unfounded.  Whereas the relics of the great figures connect us to the ebb and flow of history, the assassins' connect us to the chaos, the absurd truth that history is not a river, but countless individual incidents, and that the current we feel is just a post facto generalization, a desire to add order to something that has none.
Posted by Matt Kahn at 10:42 AM