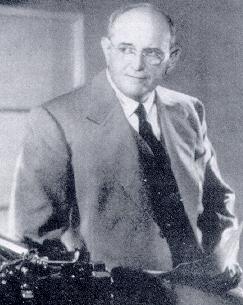 The Author:
Lloyd Cassel Douglas (1877-1951) was born in Columbia City, Indiana, the son of a Lutheran minister.  He became a Lutheran minister himself in 1903 and married Bessie Porch in 1904.  Between 1903 and 1911 Douglas preached in Indiana, Ohio, and Washington D.C. From 1911 through 1915, he was director of religious work at the University of Illinois.  After that, he preached at various churches around the United States and Montreal, retiring from the ministry in 1933.

His first successful novel was 1929’s Magnificent Obsession.  He remained extremely popular for the rest of his life, appearing on Publishers Weekly’s  top ten annual bestsellers list thirteen times from 1932 to 1953, taking the number one spot four times. 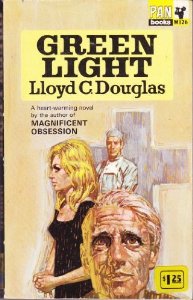 The Book:
Green Light starts with the stock market crash in 1929, signalling the beginning of the Great Depression.  The protagonist, a doctor named Newell Paige, is preparing for surgery with his friend and mentor, Dr. Endicott.  The latter, shaken by his financial loss, makes an error in the surgery, resulting in the death of the patient, one Mrs. Dexter, with whom Dr. Paige had grown close over the preceding weeks.  Dr. Paige, hoping to save Dr. Endicott’s reputation, takes the blame and runs off under an assumed name.

There are two major plotlines and a few subplots.  The other major plotline deals with Mrs. Dexter’s daughter, Phyllis, who falls for Dr. Paige, meeting him under his assumed name.  But both major plots and almost all the subplots are tied together by Dean Harcourt of Trinity Cathedral, whose philosophy and advice spur on the novel’s other characters.

His philosophy is frequently treated by the other characters as a groundbreaking revelation.  This philosophy is essentially just a rephrasing of Boethius’s philosophy in regards to free will and divine providence*, which Douglas, having spent decades as a minister, would be well aware.  While this philosophy would certainly help console the millions of readers who lost everything they had and were struggling just to stay afloat, I find it a bit disingenuous that Douglas would so heavily borrow from Boethius without so much as mentioning the philosopher’s name anywhere in the novel.

But the philosophy is like mortar and the characters bricks.  It keeps everything connected but is not as substantial.  The characters are, generally, relatable yet pretty superficial.  Dr. Paige’s decisions at the beginning of the novel are perplexing, to the detriment of the whole, but eventually are more understandable, and relatable in retrospect.  Unfortunately, the characters don’t seem to develop as much as instantly change, as if Dean Harcourt had flipped a switch when he talked to them.  This complete 180 in terms of how the characters think and behave is one of the least relatable aspects of the novel.

I was, however, impressed by the structure.  It drifts between the main storylines with their subordinate subplots, tethered together by Dean Harcourt and his philosophy.  Douglas manages this frequent shifting without seeming unfocused which is not an easy task.

It’s well structured, but everything else about it seems pretty average.  Don’t construe this as an insult, as it puts Green Light above many other bestsellers (and leagues above The Eyes of the World).  Its success was largely a matter of the time in which it was published.  There’s a reason the title of the work of Boethian philosophy Douglas uses was The Consolation of Philosophy: it attempts to put the troubles of the individual in perspective, as part of the necessary greater good, which, during the Great Depression, would strike home with a lot of people.

But this philosophy wasn’t unique to Douglas, and there wasn’t much to keep this work relevant (although I’d be remiss not to point out how little dated it seems).  In 1937, a film version of Green Light was released, starring Errol Flynn as Dr. Newell Paige. 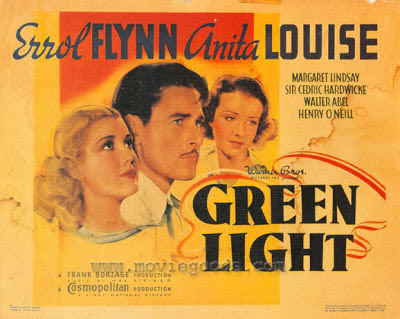 If you’re wondering what impact the film had, suffice it to say that it’s not present on Netflix, Hulu, or Rotten Tomatoes.

I wouldn’t say that Green Light is a bad book, rather it’s thoroughly ok.  I wouldn’t try to dissuade anyone from reading it, but it’s not something I would be quick to recommend, either.

*Specifically two of Boethius’s answers to age old theological questions.  The first being “Why would bad things be allowed to happen to good people and vice-versa?”  Boethius’s answer (and Douglas’s Dean Harcourt’s) is that the perils a person is faced with offer the person a chance to develop more fully, to improve.  The second, more metaphysical question, is “How can there be an omniscient deity and free will?”  Douglas doesn’t mention the omniscient deity part, but uses essentially the same answer: Humanity is being drawn towards progress.  While the fate of the individual may be negative, the fate of the whole is moving in the right direction.  In Boethian terms, the overall scope of human progress towards some goal is the divine plan (Douglas’s Harcourt calls it “The Long Parade”).  This is, of course, a drastic oversimplification, in part due to the limited space here, and in (larger) part due to my own fairly limited knowledge of the subject.