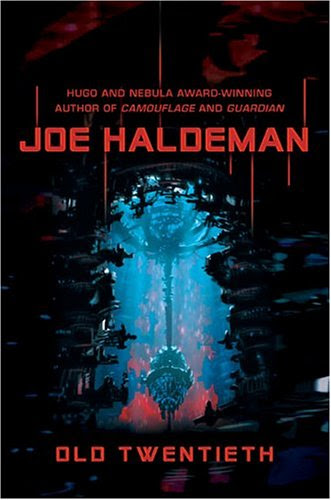 Joe Haldeman is best known for his fantastic SF novel The Forever War (1974) which won both the Hugo and Nebula for best novel.  He's and SFWA grandmaster, with five Nebulae and five Hugos (Hugii?) under his belt, the most recent for his 2004 novel Camouflage.

Old Twentieth seems a synthesis of a few major speculative concepts. The first is a society that is practically immortal. You can set your age to stop advancing at any point you wish, and causes of death are limited to catastrophic injuries.  The second is an interstellar journey.  Eight-hundred volunteers in five ships embark on a thousand-year journey to a planet orbiting Beta-Hydrii.  The third is virtual reality, a fully immersive 'time machine' that will let you experience any year or situation within a safe construct.  The fourth is the rise of true artificial intelligence, in this case, that of the VR time machine, which may or may not be responsible when people begin to die while using it.  It's up to our protagonist/narrator, Jacob Brewer, a 200-something year old VR engineer to figure it out.  Before it's too late.

Let me start with the positive.  There are numerous scenes from within the 'time machine,' depicting everything from a WWI battlefield, to a romantic encounter in Barcelona, to a day spent strolling through the NYC World's Fair.  These segments are fantastic and wonderfully written. Haldeman's writing is strong throughout, but really shines in these chapters.

But as a whole, the novel was a letdown, especially compared with the quality of Haldeman's other works.  If you read the list of premises on thought it seemed like a bit too much, you might be right. Or rather, it was a bit much for the book's length.  None of the premises get dealt with in depth, and the book just shuttles through the plot.  For example:

Immortality.  The novel gives the backstory that the Becker-Cendrek process was initially extremely expensive, leading to a massive civil war and culminating in the death of everyone not already immortalized.  The society that forms in the war's wake is pretty standard sci-fi futurism.  Population control via test-tube babies, cyber-ennui, etc.  The point being, beside some minor details, immortality isn't a significant factor in this culture.  They think of death the same way we do, it's just less frequent.  But in a society where the only cause of death is violent, couldn't death become obscene or taboo?  In a society where there is no death, might it be romanticized (I might draw some argument here, but the romanticizing of death in this society is no greater than it is in ours).   If the only cause of death is serious bodily damage, wouldn't a section of society become reclusive, the only thing standing between them and eternal life accident or malice?  Wouldn't there be a population of hedonists, with no need to worry about disease or health?  Would we have a society where individuals become so specialized communication becomes challenging, or would everyone be a Renaissance man, versed in science and the arts?  Instead of anything like the above, we get a pretty standard future-world, where people just happen to live a really-really-really long time.

All in all, Old Twentieth was a fun read, but it bit off a lot more than it could chew.