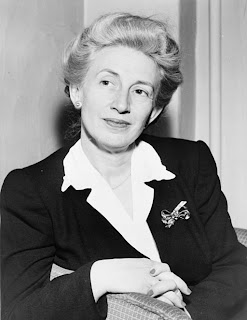 Lillian Smith (1897-1966) was born in Jasper, Florida.  Her family was the product of American aristocracy, yet the outbreak of World War One caused her father’s business to lose much of its income, and the family moved from Jasper to Clayton, Georgia in 1915.  Once there, she attended a local college, then studied piano at the Peabody Conservatory in Baltimore.  She served as a music instructor in a school in China from 1922-25, before returning to the US as director of the Laurel Falls Camp for Girls, where she met Paula Snelling, who became her life-long romantic partner.

With Snelling, Smith created and edited Psuedopodia, a literary magazine designed to feature work about race in the South.  Smith spent most of her life as a political activist, fighting against segregation.  Her 1944 novel, Strange Fruit, about an illicit affair between a white woman and a black man, made her a public figure and the subject of much controversy.

She published several more novels, non-fiction books and many essays on the subject of discrimination.  She gave many speeches and dedicated much of her life to fighting for equal rights.  Lillian Smith passed away in Atlanta in 1966. 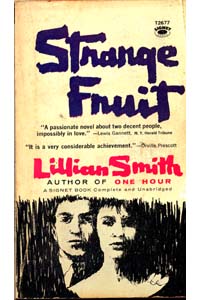 Strange Fruit takes place in the town of Maxwell, Georgia in the 1920s.  The story radiates around an affair between Tracy Deen, the son of an established white family, and Nonnie Anderson, a college educated African American maid, delving into the pasts of these characters, their families and the  history and social structure of Maxwell and the changes in that structure over the course of the preceding decades.

Obviously, a subject as charged as race in 1920s Georgia has to tread a narrow line.  If it tries too hard to keep all the negative aspects of the time and place in between the lines, it comes across as false, as a revisionist or apologist work.  If, on the other hand, it goes overboard in the other direction (e.g. portraying every white character as a sadistic Tarantino-esque villain), it comes across as caricature (e.g. Django Unchained).   Smith’s book generally doesn’t fall to either of the above traps.  She portrays the relationships between and within the black and white communities as complex, without trying to use this complexity to justify the predatory actions of much of the white community (yet she let’s us see the justifications the characters offer to themselves).  The black community’s relationship with the white community is as complex as the other way around.  Strange Fruit shows the codependence of these two communities: The whites need the blacks as laborers or servants, and are worried by the fact that the black community is moving north.   This same control of industry in Maxwell keeps the blacks dependent upon the white community for employment, and as they start going to college, moving north, or serving in the military, that control begins to shrink.  Nonnie and Tracy’s affair is a microcosm of the race relations of that time and place.

Strange Fruit is not a fun read.  It’s laced with the type of moral ambiguity in regards to race that you find in books like Richard Wright’s Native Son.  There is no clear ‘hero;’ the most blameless anyone can be in this book is as victim.  The language in the book (the N-word appears frequently throughout) would certainly be off-putting to some people, especially considering that, to this day, there are moves to censor The Adventures of Huckleberry Finn for the same type of language.  But none of this is meant to imply that it isn’t a good book, just one that focuses on challenging the reader.


At the time it was published, Strange Fruit was banned in several places, notably Detroit and Boston, and for a few days was not allowed to be shipped through the U.S. Postal Service.  This controversy only served to increase book sales.  But as time went on, Smith’s popularity waned.  Strange Fruit is only second book on my list that hasn’t had a full-length film adaptation (the first being 1917’s bestseller, Mr. Britling Sees It Through by H.G. Wells).  Other films have been made using the same title, but (like Smith’s novel) the title is a reference to a Billie Holiday song.