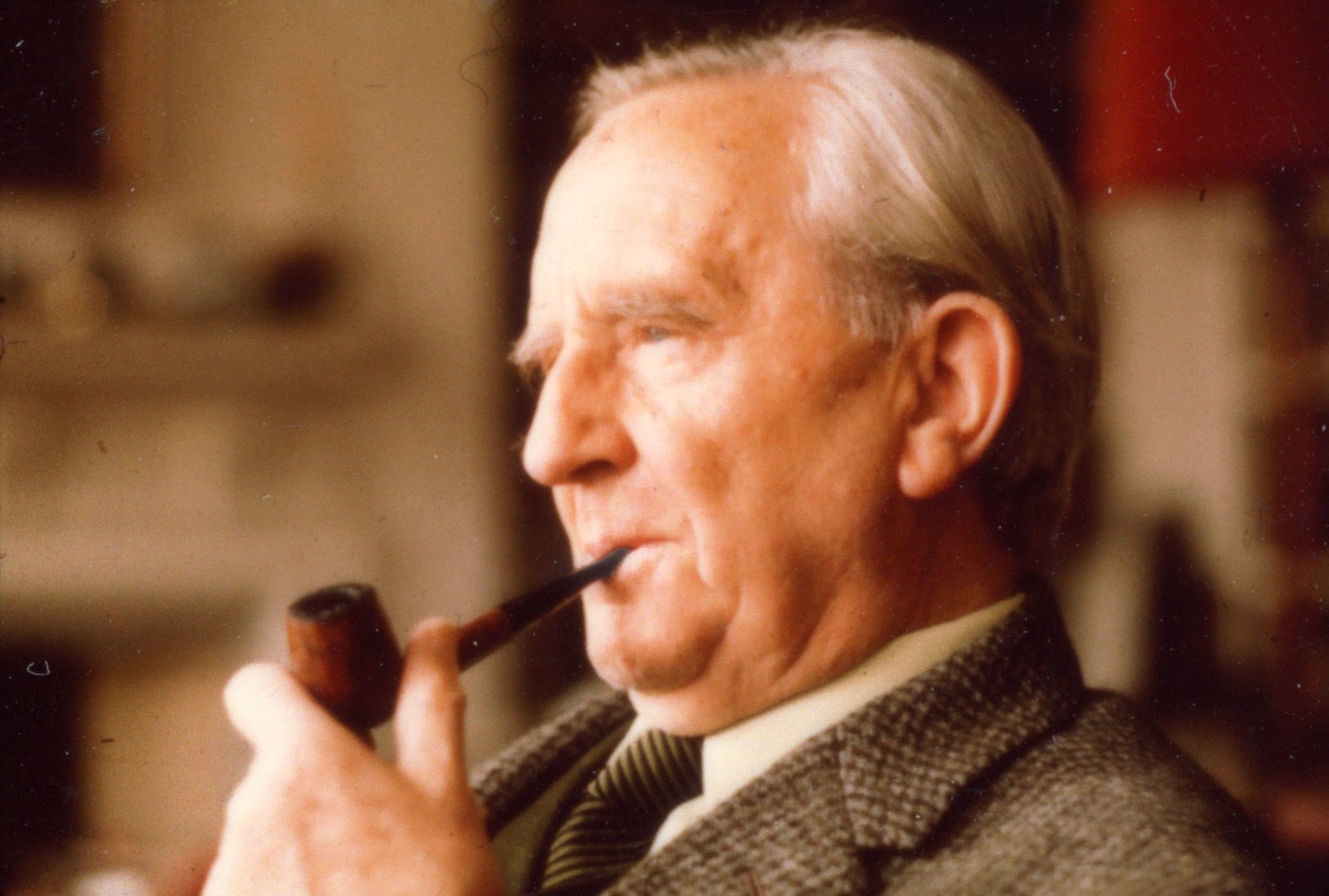 J.R.R. Tolkien (1892-1973) was born in Bloemfontein, in the Orange Free State (later a province of South Africa) where his father worked as a banker. At the age of three John Ronald Reuel Tolkein, his mother Mabel and his younger brother Hilary moved to England.  His father died of rheumatic fever in South Africa, leaving his family destitute. The Tolkiens lived by the aid of Mabel's family.  However, Mabel's family cut off financial support after she converted to Roman Catholicism in 1900.  In 1904, Mabel died of diabetes.  Guardianship of the twelve year old Tolkien and his brother was given to Father Francis Xavier Morgan of Birmingham.

In 1911, Tolkien began attending Oxford college, graduating with honors in English Language and Literature in 1915. In 1913, after a five year, interrupted courtship, Tolkien and Edith Bratt became engaged.  The two married in March 1916, a few months before Tolkien shipped out for service in World War One.  He was sent back to England in October of that year after contracting trench fever.  While recovering in England, Tolkien began work on The Book of Lost Tales.  After the war, Tolkien worked compiling the Oxford English Dictionary, then was a professor at the University of Leeds where he worked on translations as well as teaching.  In 1925, he began teaching at Oxford University, where he taught until his retirement in 1959.  In 1936, Tolkien published The Hobbit, which sold well enough for his publishers to request a sequel.  This wish was fulfilled by The Lord of the Rings, the three volumes published in 1954 and 1955.  The books ended up becoming popular enough to allow Tolkien and his wife to retire in comfort.

In 1972, the queen appointed Tolkien a Commander of the Order of the British Empire and was given an honorary doctorate from Oxford.

Before I speak more about the content of The Silmarillion, I should point out the oddity of it being the single bestselling novel of the year.  The Silmarillion is a very dense, frequently dry book that I can only see as being of interest to those who are already fans of The Lord of the Rings.  While some sci-fi and horror are on the list in the coming decades, this is the only fantasy novel that made it, and it's not a very accessible novel at that.  Add to that that it was published more than two decades after the books that made it popular, The Silmarillion would seem to have a lot going against it.  However, in the sixties and seventies, Tolkien and The Lord of the Rings received massive popularity within the U.S. counter culture.  Between the publication of TLOR and The Silmarillion, bands like Led Zeppelin, Rush, and Genesis, wrote songs explicitly and allusively about Middle Earth, and that's ignoring the bands that have since faded into obscurity, or details like T. Rex's drummer changing his name to Stephen Peregrin Took and whatever the hell this thing Leonard Nimoy made is:

All this is a way of saying that Middle Earth had gone from cult status to cultural trend, leading to bestseller status of this week's subject.   While those who have read The Lord of the Rings know that it's full of names, dates, geography, history, and myth, in terms of density it falls far short of The Silmarillion.  Of the novels 458 pages, over 15% comprise glossaries, family trees, and indices.  In fact, the Index of Names alone takes up 54 pages.  The fact is, Tolkien wrote a history book; Its main function is to deliver information, fictional though it may be.   And so we get the thousands of years of the history of Middle Earth preceding the events of The Hobbit, which tells of the evil Melkor, the creation of the elvish kingdoms, the rise of Suaron and the arrival of men in Middle Earth. If you haven't read The Hobbit and The Lord of the Rings, I can't recommend The Silmarillion.  If you have, and have a strong desire to know more about the world it takes place in, then this is a great place to start. Bestselling novels of 1977: 1. The Silmarillion by J.R.R. Tolkien 2. The Thorn Birds by Colleen McCullough 3. Illusions: The Adventures of a Reluctant Messiah by Richard Bach 4. The Honourable Schoolboy by John le Carré 5. Oliver's Story by Erich Segal 6. Dreams Die First by Harold Robbins 7. Beggarman, Thief by Irwin Shaw 8. How to Save Your Own Life by Erica Jong 9. Delta of Venus by Anaïs Nin 10. Daniel Martin by John Fowles Also Published in 1977: The Public Burning by Robert Coover A Scanner Darkly by Philip K. Dick The Shining by Stephen King Song of Solomon by Toni Morrison Sources: Tolkien, J.R.R. The Silmarillion. 1977. New York: Ballantine, 1984. Print.