1995: The Rainmaker by John Grisham 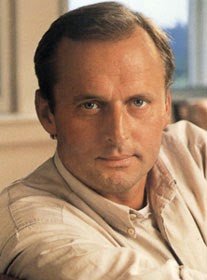 
Since 1989, Grisham has published a total of 28 novels, four children's books, and a work of non-fiction.  His family splits its time between homes in Oxford, Mississippi, Charlottesville, Virginia, and Chapel Hill, North Carolina.  Grisham also serves as a board member on the Innocence Project. 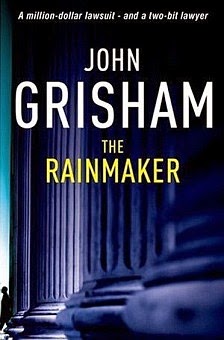 
The Rainmaker is the first person account of Rudy Baylor's last semester in law school, establishment of his career, and the giant case he lucked into.  Baylor is broke, working part time at a bar whose status as a front for illegal money is an open secret.  During his last semester, as part of a class Rudy helps advise some elderly retirees on legal matters.  He ends up renting a room from Mrs. Birdie Birdsong, an old woman whose will suggests a massive fortune, and he befriends, and later signs on, the Black family, whose son was wrongly denied a bone marrow transplant by their insurance company, Great Benefit.  After he graduates and multiple job possibilities fall through unexpectedly, he ends up working for "Bruiser" Stone, the crooked lawyer friend/accomplice of the bar owner.  It's here he befriends the bizarre Deck Shifflet, a would-be lawyer who can't pass the bar.  When Bruiser and the bar owner flee the country to avoid an FBI raid, Rudy and Deck start their own practice.

The insurance case turns out to be the loose thread in a major cover-up, and novice Rudy is sent up against a corporation worth hundreds of millions of dollars, and the best lawyers money can buy. In the meantime, Rudy falls in love with Kelly Riker, a beautiful young woman who's married to an abusive lunatic.

I usually don't like spoiling the endings, but it's pretty relevant here.  This is a David vs. Goliath story, with the lower middle class family and their broke rookie lawyer taking down a massive heartless organization.  It's pretty much a revenge fantasy against insurance companies.  Rudy, through various, usually legal, means, acquires tons of incriminating evidence against Great Benefit.  We the readers know this information ahead of time, so we're anticipating him springing it on them in court, and I can't lie, it's pretty satisfying.  Like I said, this is as much revenge fantasy as legal thriller.
While the subject matter is dark at times, The Rainmaker has a lot more humor and sarcasm than The Chamber, and is what I'd describe as a fun book.  The film version was released in 1997.  The film was directed by Francis Ford Coppola, and starred Matt Damon as Rudy Baylor, Danny DeVito as Deck Shifflet, Claire Danes as Kelly Riker, and John Voight as the opposing counsel, Leo F. Drummond. 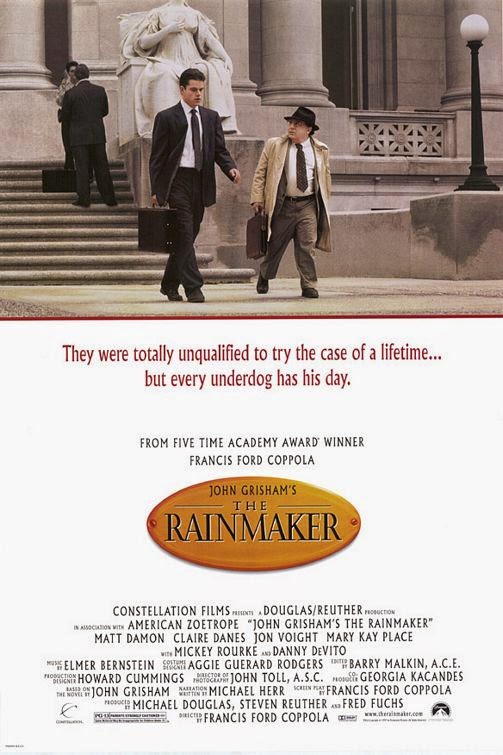 Like The Chamber, this is an entertaining read, but there's nothing here that a good tv law procedural doesn't have.  If you're looking for a fun time killer, try The Rainmaker.  If not, don't.