From Page to Screen to Screen: The Call of Cthulhu

H.P Lovecraft's The Call of Cthulhu was first published in the Weird Tales magazine in 1928.  It is one of his best known stories, and a central part of the Cthulhu mythos, the grouping of stories by Lovecraft (and others) dealing with the old ones generally and often Cthulhu particularly.  The story is told by Francis Thurston, whose grand-uncle's papers have led him to a horrifying discovery.  Between the disturbing dreams of a decadent Bostonian artist, the investigation of a Louisiana detective, and the memoir of a Norwegian sailor, Thurston has gained knowledge of an ancient cult and their dread elder gods. And while "dead Cthulhu waits dreaming," it must be remembered that "That is not dead which can eternal lie/ And with strange aeons even death may die."

The story may have lost a bit of its punch over the last 90 years, but only because Lovecraft's influence on the horror genre has been so widespread as to make his style, as well as the cosmic horror subgenre, seem almost commonplace.  Yet it remains a classic for a reason. 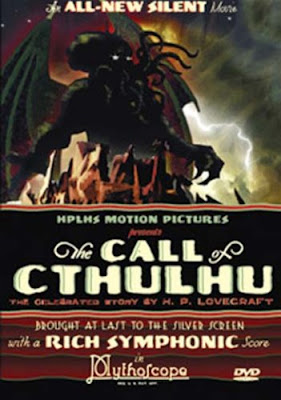 The Call of Cthulhu (2005) is the lovechild of the H. P. Lovecraft Historical Society, a fan/research/live-action-roleplay group based in Glendale, California.  Living up to the "Historic" in their name, they created a silent film, with set design, makeup, and music done in the style of 1920s cinema, and it works pretty well.  There are some cases where the background is clearly more modern, but the budget was presumably quite small, but often impressive. 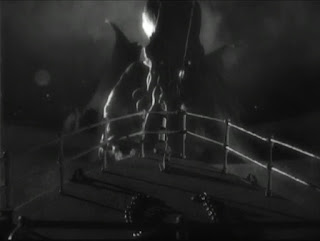 I'm still not sure how well the movie would work for someone who hasn't already read the story, though. 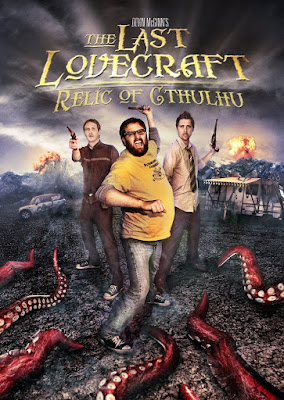 Jeff (Kyle Davis) and Charlie (Devin McGinn, who also wrote the script) are two best friends working an unexciting desk job, when one day an old man shows up at their apartment to give Jeff a relic of Cthulhu.  It turns out that Jeff is the last blood relative of H. P. Lovecraft, and this may give him some resistance to the maddening effects of the elder gods and their ilk.  But Star Spawn and other worshippers of Cthulhu are quick on their heels, so they turn to Paul (Barak Hardley), a weird nerd who lives with his grandma that Jeff was mean to in high school.  Together, they must go on a quest to stop the rise of Cthulhu and the end of life on earth as we know it!

This movie actually had a couple cameos worth mentioning.  Martin Starr (Freaks & Geeks, Party Down, Silicon Valley) appears as Paul's nerdy friend, and Richard Riehle, who has had small parts in everything from Office Space, to Glory, to Casino, to Free Willy, to The Man from Earth to Bridesmaids, to the upcoming masterpiece Helen Keller vs. the Nightwolves. 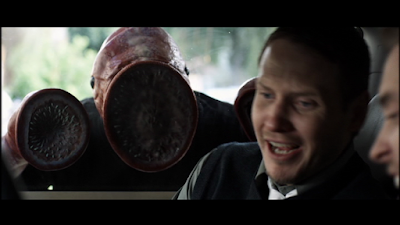 The humor is too often aimed at the 12-15 crowd, and the Jeff, the protagonist, can't ever seem to give a single shit about what's going on.  Even when he's screaming, he does so with remarkable apathy. 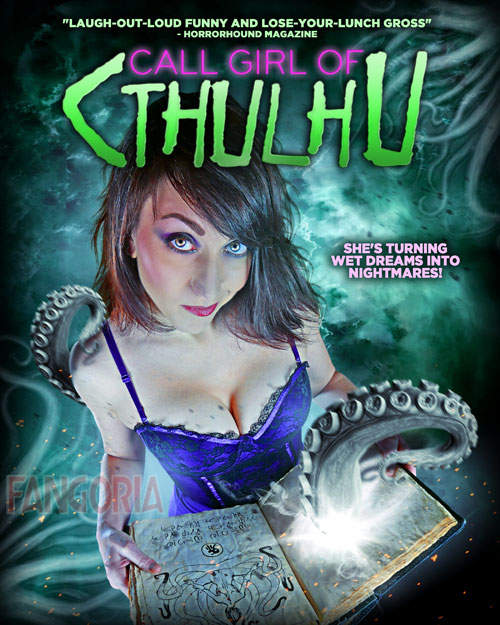 This is a sexploitation horror/comedy film following an young twenty something artist named Carter Wilcox (David Carollo) who falls in love with a call girl named Riley (Melissa O'Brien).


His friend and roommate Erica is an avant-garde musician (which is a nice way of saying she mixes grating industrial noises together), who's dating a jerk dj named Rick "The Dick" Pickman. Meanwhile, Professor Curwen and a few grad students are trying to track down the cult of Cthulhu, only to luck out and capture a copy of the Necronomicon.  It seems the cult is looking for a prostitute with a very particular bookmark (spoiler: It's Riley).  Curwen tasks Carter with making a copy of the Necronomicon, while trying to hunt down Riley herself,  But it's too late, Riley has started her transformation into something obscene and grotesque, and has begun to infect others.

Whereas a lot of the budget for The Last Lovecraft went to monster design, Call Girl put a lot into a large cast scantily clad women (cf. sexploitation).

This is a no-brainer.  It's as literal an adaptation as could be had, accounting for the change in media.  This is the work of the H. P. Lovecraft Historical Society, after all; historical accuracy is kind of their thing.

There is a big caveat to this, and I'll get to it in a moment.

But first I want to point out something I noticed about these three films, and that' that they represent three different aspects of Lovecraft's legacy.  The first looks at Lovecraft as a historical/literary figure.  The second considers Lovecraft's influence on science-fiction and horror comics, and therefore on nerd culture.  The third is the result his influence on horror (think something like the Reanimator (1985)) and counter-culture.

I'd be more likely to recommend the first movie to people, because it has a much broader appeal.  Honestly, much of Call Girl of Cthulhu didn't appeal to me at all.  The reason I chose this as the best is because of one scene that I think stands out above the rest, one scene that I will remember, not for being bloody or gross, but simply very good.  Carter and Riley are on a date at a restaurant, and the waiter turns out to be one of Riley's clients, a sad late middle aged man who we know left his family and lost his career because he's in love with Riley.  This bit part is given a lot of power, and the entire restaurant scene, including a series of funny and weird glimpses of Riley's other clients, is a scene I'm going to remember, even after the rest of this film sinks into the miasma of pop culture floating in my subconscious.  As for the rest of the movie, if you don't mind B-Horror sexploitation flicks, it's pretty solid.

Things are going to stay spooky, as next time we'll be looking at Edgar Allan Poe's "The Raven" (1845) and three films:

The Raven (2012): A mystery/thriller starring Cusack as Edgar Allan Poe