From Page to Screen to Screen: The Razor's Edge 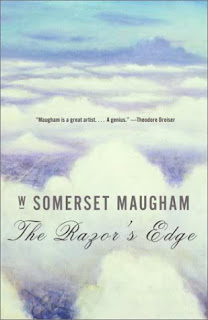 The Razor's Edge is a 1944 novel by W. Somerset Maugham.  The first chapter is like that of Slaughterhouse-Five (1969), where the author explains his purpose in writing the novel, and in this case declares it a roman a clef.  Maugham himself makes frequent appearances in the book, as he pops in and out of the lives of Larry Darrel and those who know him.  Larry has just returned to Chicago from serving as a fighter pilot in WWI, and decides not to go into business with his friend Gray Maturin at Gray's father's investment house.  His fiancée, Isabel, decides to give him some time find himself, and her uncle, a good-hearted snob par-excellence named Elliott Templeton.  Meanwhile, their lower-middle class friends Sophie and Bob are madly in love, get married, and have a kid.

Well, after spending some time in Paris, Larry decides that he still doesn't want to be a stockbroker, and Isabel leaves him, eventually marrying Gray and having his children, despite still being in love with Larry.  Sophie's husband and child die in a car crash, sending her into pattern of self-destructive behavior meanwhile Larry has gone to India and finds a path towards enlightenment there.  He comes back only to find that Sophie and Gray are living with Uncle Elliott in Paris, after the stock market crash of 1929 ruined Gray's family's firm.  Here they run into Sophie, who has become an alcoholic opium-addict and likely possibly prostitute  Larry makes it his mission to help Sophie, and she achieves sobriety.  Larry eventually decides to marry her, which devastates Isabel.  Isabel tempts Sophie into drinking again, which leads to her reentering the low-life and her eventual murder.  Larry decides to head back to the US, to share what he has learned with the salt of the earth.  According to Maugham at the novel's close:  "...I had written nothing more or less than a success story.  For all the persons with whom I have been concerned got what they wanted.  Elliott social eminence; Isabel an assured position backed by a substantial fortune in an active and cultured community; Gray a steady and lucrative job with an office to go to from nine till six every day; ...Sophie death; and Larry happiness."

Maugham manages to do a lot of things at once, and do them all well.  At once a portrait of man's search for meaning after tragedy, an exploration of the West's blooming relationship with Eastern philosophy, an insightful criticism of class culture, and a serious interpersonal drama, The Razor's Edge is a wonderful book. 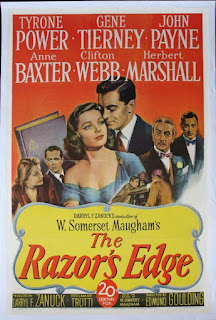 The 1946 adaptation sticks very close to the original novel, the main changes being just a matter of abridgment and the removal of some of the more explicit discussions of sex.  In this version Larry Darrel is played by Tyrone Power (The Mark of Zorro, Witness for the Prosecution), who's portrayal comes across as a little too ingenuous.  While its important for Larry to be earnest and good-natured, he is still a deeply troubled man who has seen more of death than any of his friends.  Isabel is played by Gene Tierney and Sophie is played by Anne Baxter (All about Eve, The Ten Commandments), who won a best supporting actress oscar for the role.  Clifton Webb was also nominated for his role as Elliot Templeton.

The movie drags a bit at some points, but seeing as it's a film about introspection that's almost bound to happen. It's also a very good-looking film, the party scenes especially are visually stunning.

I don't think I'd call it a great film, but it's certainly a good movie. 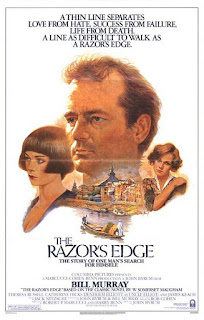 The 1984 version makes a few changes to the novel right off the bat.  The Maugham character is removed entirely, Larry and Gray both go overseas during WWI (as ambulance drivers, not fighter pilots), and the film starts before the two leave for the war and includes their wartime experiences.  This was a decision that could have been fantastic but ended up being harmful to the movie overall.  Before the war, Larry, played by Bill Murray, who also co-wrote the script, is portrayed as a humorously unconventional guy with a heart of gold.  This is a problem because after he comes back from the war, everyone talks about how much he's changed, but we only ever see him act the way he did before going to war.  The characters consistently engage in what followers of my blog will know is one of my biggest pet peeves: Everyone says the character has certain traits, but we never actually see the character exhibit those traits.  In particular, multiple characters remark upon how much philosophy Larry has read, but at no point does Larry ever discuss philosophy at all.

But back to the war itself, a big problem with the war scenes and that they look like a WWI reenactment.  And the horrors of war are really not that horrible when the difference between a healthy and wounded soldier is how many bandages he's got wrapped around him.

I think my biggest problem with this movie was in how Larry's quest for enlightenment is achieved.  It mostly happens between scenes and the few scenes that deal with the enlightenment are superficial.  Here's a rundown of all Larry's scenes in India.  He arrives, gives some change to children, which draws more children to ask for change (note: these children are not starving rags-draped wretches, but just smiley precocious kids) and we cut to Larry running down a street being chased by a mob of children.  He rents a houseboat, the owner of which suggests he look for meaning at a temple which he can lead Larry to.  Larry cracks jokes with some locals at the base of the mountain.  Montage of Larry climbing the mountain.  Larry is welcomed at the monastery.  Cut to Larry joking with the children at the monastery.  The head monk sends Larry to the top of the mountain with his books, which Larry must burn to keep warm. Cut to Larry and the head monk in the temple.  Larry has learned everything the monks have to teach him.  Which was what exactly?  This is kind of like if Mr. Miyagi's training had started and ended with "Wax on, wax off."

Don't get me wrong, Murray is a lot of fun to watch, as is Elliott Templeton (here played by Denholm Elliott, who you'll likely know as Marcus Brody from the Indiana Jones trilogy).  The problem is that so much screentime is given to Murray's antics that practically none is given to his questing for truth.  And these gags/antics are often a bit over the top, to the extent that I have to wonder how he finds time to read philosophy when he's organizing a Say Anything with an organ grinder. 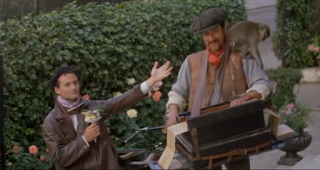 That said, the movie isn't as bad as its reputation.  It's just not very good either.


As I mentioned earlier, the 1946 version is largely a cinematic abridgement of the novel.  It's a little lighter on the philosophy, some minor characters are written out, and some of the discussion is toned down, but overall it's an accurate retelling of the novel.

I think one of the big problems with the 1984 version can be shown in how the two movies handle the same scene.  After Gray loses everything in the Depression, he begins to suffer from migraines.  Larry uses hypnosis to put Gray on the road to recovery.   In the 1946 version, Larry explains to Gray that this power is within Gray's own mind, and that through meditation and perseverance Gray can eventually cure himself.   In the 1984 version, we end up with something closer to a Jedi mind trick.  Larry hypnotizes Gray, never mentions anything about what he's doing, Gray is cured, and that's the last we ever hear of it.

While I think Murray's a better actor than Power, the role was too heavy on comedy in the 1984 version.  For all Larry's desire to find meaning and his eventual enlightenment, the 1984 version never actually talks about Larry's enlightenment.  In fact, it seems like Larry just goofs around in Europe and India for a while so there never seems to be any earnestness in his quest for knowledge, which makes the character less interesting.  The protagonist's main quest takes place predominately between scenes of him being charmingly hilarious, which makes the main quest seem trivial, like something you could accomplish in your spare time.

Overall, the plot, characters, and supporting cast of the 1946 version make it the better film.

Tune in the week after next when things get a bit darker.  We'll be looking at H. P. Lovecraft's story "The Call of Cthulhu" (1928) and three films based on it:


The Call of Cthulhu (2005): A silent 20s-style film produced by the H. P. Lovecraft Historical Society


The Last Lovecraft: Relic of Cthulhu (2009): an indie horror-comedy