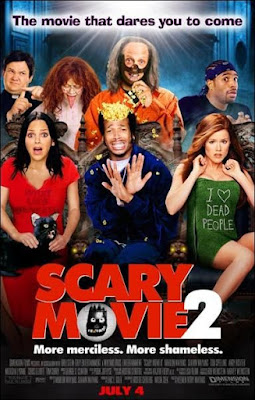 Director: Keenen Wayans
Runtime: 83 minutes
As a teenager I watched the first four Scary Movie installments, and I remember thinking that Scary Movie 2 was the worst of the lot.  Rottentomatoes suggests I'm not alone in this judgment. (The first four films are rated 53%, 15%, 36%, and 37%, respectively.)  The first Scary Movie (2000) brought the genre spoof back into the limelight.  While of course genre spoofs existed before (and perhaps hit their zenith with Airplane! (1980)) the modern terrible genre spoofs, from Not Another Date Movie (2001) to Meet the Spartans (2008) owe their existence to the massive financial success of the first installment of the Scary Movie franchise.
The sequel has some of the characters reprising their roles from the first film, which mostly parodied I Know What You Did Last Summer (1997) and Scream (1996).  Anna Faris plays Cindy, Regina Hall plays Brenda, Marlon Wayans is Shorty and Shawn Wayans is Ray.  This film is largely based on 1999's The Haunting, which was a remake of the 1963 film, which was itself based on Shirley Jackson's 1959 novel, The Haunting of Hill House.  Anyway, the aforementioned characters, along with a few newcomers (Kathleen Robertson, Tori Spelling, and Malcolm in the Middle's Christopher Masterson), are college students tricked into helping summon the spirits at a haunted house by the pervy Professor (Tim Curry) and his assistant Dwight (David Cross).  Obviously, shit gets out of hand.
What makes this installment so much worse than the others?  Well, most of the jokes aren't jokes.  There are a couple scenes with an obscene parrot that don't work at all, because what the parrot is saying isn't funny.  Jokes about weed can be funny, but instead we're expected to laugh because weed is being mentioned.  The creepy butler's gross deformed hand is good for a joke or two, but not for gags that last several minutes. 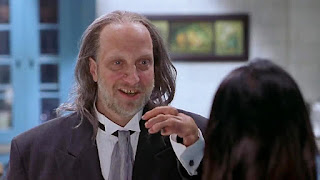 I have no problem with dumb humor, but there needs to actually be humor in it.
If you want a fun movie that you don't have to take seriously, some of the movies in this franchise are good for that.  But not this one.
Rating:★☆☆☆☆
The Cross Section: 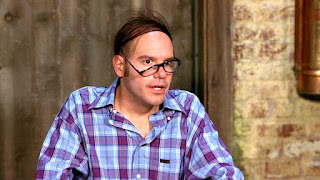 Character:★★★★☆
David Cross plays Dwight, the Professor's assistant.  While the professor is concerned about making sure there are enough cameras in the sexy co-eds' bedrooms, Dwight is pretty serious about proving the existence of the supernatural.  He's wheelchair bound, but determined not to let that slow him down. Whether it's passing out papers or being fellated, he always refuses offers of help by declaring "I can do it myself!"  The character is surprisingly fun, and Cross delivers a good character performance.

Cross gets a good amount of screentime as part of the ensemble cast.