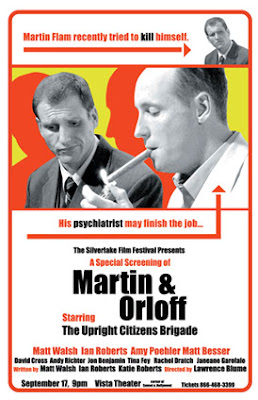 Director: Lawrence Blume
Runtime: 87 minutes
Martin Flam (Ian Roberts), a man who designs food costumes for corporate promotional events, tried to kill himself.  He's required to start seeing Dr. Eric Orloff (Matt Walsh, Veep), who drags Martin into his own dysfunctional world.  Their first session begins with Orloff dragging Martin to his amateur softball league, where everyone gets arrested after a fight breaks out.  Now Martin not only has to deal with the crushing guilt of designing costumes that are dangerous to wear (it turns out eyeholes are important in a costume), but Martin's best friend (a volatile Gulf War vet played by H. Jon Benjamin), Martin's stripper/psych grad student girlfriend (Kim Raver, 24), a new love interest (Amy Poehler) and her jealous and violent ex-NFL ex-boyfriend.

As the poster indicates, the cast is predominately members of the Upright Citizens Brigade, with a brief cameo by Tina Fey and Janeane Garofalo.  Beside Martin's straight-man, I don't know if there's any character that couldn't be described as wacky.  Fortunately, the cast is talented enough to pull it off.

On a side note, the movie's promotional website is still up, and it absolutely looks like a website made in 2002.  The weird thing, though, is that the cast and filmmaker bios have been updated, some as recently as 2012, which makes me wonder who, ten years after the movie was released, went back into the website to make sure the info was up to date. 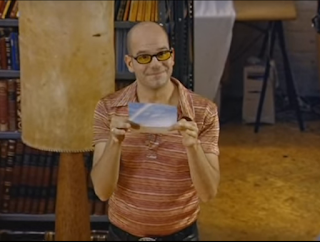 David Cross plays Dan Wasserman, a flamboyant, terrible playwright, who wants Orloff's praise for his play that premiered at a dinner-and-a-show restaurant.  While pretty funny, the character's only trait is his flamboyance, which is only good for so many jokes.

There's a brief scene in the middle of the movie, and Cross joins the ensemble of supporting characters who team up at the end to save the day.