1928: The Bridge of San Luis Rey by Thornton Wilder 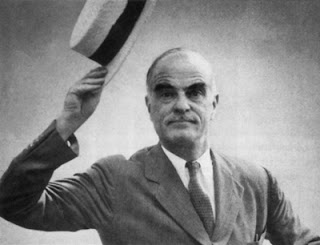 Thornton Wilder (1897-1975) was born in Madison, Wisconsin but grew up in California, first in Ojai then, after spending a couple years in China, Berkeley.  He received a B.A. from Yale in 1920 and a Master’s degree in French from Princeton in 1926, at which time he began a lifelong career as a teacher and a writer, publishing his first novel, The Cabala in 1926.  He published his second and most famous novel, The Bridge of San Luis Rey the following year, earning him the first of three Pulitzer Prizes (the other two were for his plays Our Town (1938) and The Skin of Our Teeth (1942)).

Wilder served as an information officer in World War Two, rising to the rank of lieutenant colonel in the air force.  He never married.  Although he kept his personal life to himself, it is now known that Wilder was gay and carried out an affair with Samuel Steward (a writer and professor who later became the official tattoo artist for the Hell’s Angels).  Wilder continued writing into his old age, publishing his last novel, Theophilus North, in 1973, two years before his died peacefully in his sleep in 1975.

So what's this book about?
The first section of The Bridge of San Luis Rey starts with the collapse of a rope bridge in eighteenth century Peru, a disaster causing five people to fall to their death.  The accident is witnessed by a monk who is determined to figure out what led these people to be on the bridge in an attempt to try to understand god’s plan.  The second, third, and fourth sections show the interconnected and distinct lives of the five victims and their respective roles in the city of Lima.  The final section recounts the consequences of the monk’s research.

“The result of all this diligence was an enormous book, which as we shall see later, was
publicly burned on a beautiful Spring morning in  the great square.  But there was a secret
copy and after a great many years and without much notice it found  its way to the library of
the University of San Marco.  There it lies between two great wooden covers collecting dust
in a cupboard.  It deals with on after another of the victims of the accident, cataloguing
thousands of little facts and anecdotes and testimonies, and concluding with a dignified
passage describing why God had settled upon that person and upon that day for His
demonstration of wisdom.  Yet for all his diligence Brother Juniper never knew the central
passion of Doña María’s life; nor of Uncle Pio’s, not even of Esteban’s.  And I, who claim to
know so much more, isn’t it possible that even I have missed the spring within the spring?”
(9).

The prose itself is wonderful, and the story is structured beautifully.  Everything ties together in a way that is cathartic but leaves you with the unanswerable questions: Fate or Chance?  Does order exist or do we input order in retrospect?  This novel is both philosophically and aesthetically beautiful.

Why was it so popular?
Questions like the ones posed in The Bridge of San Luis Rey are eternal, but it’s easy to see how, in the socially tumultuous period following the largest war the world had ever seen, people would be looking for answers more fervently.

Intense critical acclaim drove the novel into the spotlight.  I cannot help but speculate that the undaunting length of the novel (my copy is only 123 pages) worked to its advantage.

This one sounds familiar...
The Bridge of San Luis Rey is the first novel on my list that has remained popular to this day.  It’s frequently assigned as required reading in schools and Wilder’s play, Our Town, is still performed regulalry by professional, amateur, and school theater groups.

Since its publication, The Bridge of San Luis Rey has appeared on TIME Magazine’s list of the 100 best novels since 1923 and placed as number 37 on Modern Library’s 100 best novels of the 20thcentury.  It’s also had three film adaptation, in 1929, 1944, and a poorly received 2004 version, starring Kathy Bates, Harvey Keitel, and Robert DeNiro.

Should I read it?
Yes.  As I said earlier, the novel is both aesthetically and philosophically beautiful.  The story and characters are layered and the prose is strong.  Read this book.