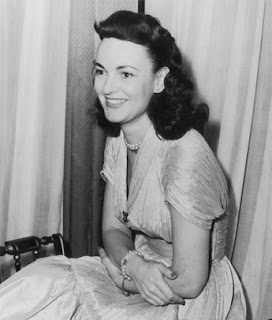 Kathleen Winsor (1919-2003) was born in Minnesota, but grew up in Berkeley, California.  She graduated from UC Berkeley in 1938.  She married fellow student, Robert Herwig.  She worked for a newspaper between 1937 and 1938, briefly writing a sports column before being laid off.

She wrote Forever Amber while her husband was fighting in World War Two, the book being published in 1944.  It was banned in fourteen states and was immediately one of the bestselling books of the decade.

Although she published seven more novels, none were nearly as successful as Forever Amber. She passed away at her home in Manhattan in 2003. Forever Amber takes place in Restoration Era England.  Between 1642 and 1651, England was ravaged by a series of Civil Wars between Royalists and Parliamentarians, ending with the execution of King Charles I, the exile of his son, Charles II, and Cromwell’s rise to power.  In 1660, after the death of Cromwell and his heir’s lack of ability to maintain the army’s confidence, Charles II returned to England and the monarchy was restored (hence, the Restoration).  The novel’s protagonist, Amber St. Claire, is sixteen in 1660.  Unbeknownst to her, she is the daughter of nobility, her mother having fled her Royalist parents to be with her love, whose family fought on the opposite side of the Civil Wars.  The mother died in childbirth and the father disappeared.

Amber makes her way to London from a small town in the countryside, by joining up with a group of titled soldiers who pass through her town.  She falls in love with one of them, Lord Carlton, and this relationship serves as a throughline for the rest of the novel.   Carlton leaves her to travel to the New World, and Amber marries his friend the Earl of Almsbury.

Historical events, such as The Great London Fire of 1666 and The Great Plague of 1665-1666, feature prominently in the story.  The novel also delves into the politics of the time, Amber’s numerous marriages and affairs, eventually even becoming a mistress to Charles II and a political force in her own right. This, as one could guess, caused considerable controversy.  The novel was banned in 14 states. It was condemned by the Hays Office (i.e. the guys who enforced the Hays Code).  The Massachusetts Attorney General, in his account of why the book should be banned as pornography, cited the 70 references to sexual intercourse, 39 illegitimate pregnancies and 10 abortions.  A film version was made in 1947 starring Linda Darnell and Cornel Wilde. 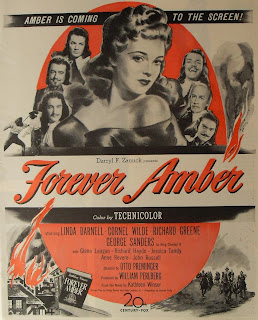 As you could probably guess, the film was significantly toned down for theaters, and has since been pretty much forgotten.

There’s one question people who take popular culture seriously tend to ask about this type of work, any answer to which is frequently debated: Is it endorsing or addressing social inequalities?  Does Amber’s reliance on appearances and sexuality to get what she wants support that behavior, or is it criticizing how that was the only avenue society had left open for women with ambition.  A strong argument could be constructed either way, but if you’re just wondering if it’s worth reading, I’ll say this:  In a lot of ways, it seems and reads like a bodice-ripper romance.  I’m not well-read in that genre, but it seems like it would be part of the upper crust, in regards to writing style and character depth.  If you’re not into romances, you probably wouldn’t like it much, but if you are, you would.