This is Lloyd C. Douglas's (1877-1951) third time as #1 bestseller of the year.  A Lutheran minister and native of Indiana, Douglas appeared in the top ten annual bestsellers list thirteen times between 1932 and 1953.  He tops the list four times, the first time with Green Light in 1935. 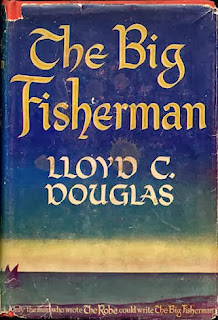 At first I thought The Big Fisherman was going to be a sequel to Douglas's earlier bestseller, The Robe.  Rather, Fisherman takes place before, during, and after the events in The Robe. The novel starts nearly two decades before the Jesus begins preaching, and focuses on an alliance being forged between the Jews and the Arabians, who, we are told, have been unfriendly for about 1,500 years, but must put aside this enmity to make a show of force to dissuade the Romans from plundering the Middle East.  To solidify this alliance, the Arabian king's daughter, Arnon, is married to the Jewish king Herod's son, Antipas.  The marriage is not a happy one, and Antipas's infidelity drives away Arnon (with their daughter, Fara) and inspires the anger of the Arabian people.  At the age of sixteen, Fara, after her mother's death, rides off to take revenge against her father who is now the tetrarch of Galilee.

She arrives in Galilee as her father is leaving for Rome, and ends up staying with a successful fisherman named Simon who lives with his mother-in-law (no, seriously, he lives in a house with just him and his mother-in-law).  So, Fara has to put her patricidal plans on hold, but, in the meantime, Simon decides to find out just what's up w/r/t this Carpenter that's going around preaching blasphemies and performing miracles.  Simon eventually joins up with this preacher (spoiler: It's Jesus) and changes his name to Peter.

Honestly, Fara's storyline was far more interesting to me than Simon/Peter's.  Perhaps it's largely because we all know how the Jesus and Peter thing turns out.  Then again, I'm not in this novel's target demographic.  As a piece of historical fiction, The Big Fisherman succeeds in creating an atmosphere and setting that draws you in.  The political and social life of Roman colonies and nomadic peoples are a lot of fun to read about, though I can't speak to their veracity one way or the other.
While it may sound silly to complain about an explicitly religious novel being preachy, I'm going to do just that.  While Simon/Peter starts out skeptical he becomes convinced of that Jesus is more than just some radical preacher.  As opposed to Marcellus in The Robe, who comes to follow Jesus by the power of his ideas and the effect he (Jesus) has had on others, Simon/Peter witnesses Jesus heal the sick on a couple occasions.  If someone can heal the sick with just a word or gesture, it doesn't take a great deal to convince others to follow.  As such, the emotional/psychological journey Simon/Peter takes is less interesting than Marcellus's.

It seems that the film has not had a DVD release.  Although it appears that the full film is available on Youtube.

While it has its flaws (e.g. a lack of focus, very stiff prose), if you're a fan of (Christian) religious-historical fiction, you'll most likely enjoy the The Big Fisherman.

Pearl Buck - Peony
Truman Capote - Other Voices, Other Rooms
William Faulkner - Intruder in the Dust
Norman Mailer - The Naked and the Dead