1956: Don't Go Near the Water by William Brinkley 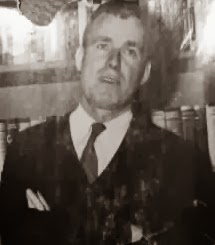 William Brinkley (1917-1993) was born in Custer City, Oklahoma.  Brinkley graduated from the University of Oklahoma in 1940 after which he worked for a couple years as a reporter for the Washington Post before becoming a commissioned officer in the US Navy, a position in which he dealt mostly with public relations.  After the war, Brinkley published his debut novel, Quicksand (1948) before going back to work at the Washington Post.  In 1951, Brinkley started working at Life Magazine, a position he retained until 1958.  In 1955 he published his only non-fiction work, a biography of a Slovakian nun titled The Deliverance of Sister Cecelia.

His best-selling work, Don’t Go Near the Water, was published in 1956.  He published six more novels between 1961 and his final novel, The Last Ship, in 1988.  In 1971, Brinkley moved to McAllen, Texas, where, in 1993, after a long bout of depression, he died from an overdose of barbiturates. 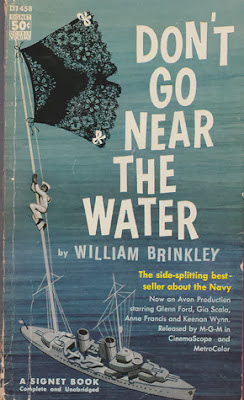 Don't Go Near the Water focuses on a group of public relations officers stationed on the tropical Pacific island of Tulura during World War Two.  Structurally, the novel is episodic, each chapter dealing with a different problem and placing emphasis on different characters.  The 'episodes' range from the problems of an enlisted man dating a nurse (i.e., an officer), to blackmailing a self-absorbed war correspondent into building a schoolhouse for the island's children.

The novel's main character is Ensign Max Siegel, a burly Harvard grad who is the only one of the PR group to have learned to speak Tuluran.  The first episode of the novel deals with a very serious problem:  Edgar Rice Burroughs is coming to Tulura (NOTE: Burroughs actually volunteered to be, and served as, a war correspondent in WWII, despite being in his sixties at the time) and the PR people want to take some photos of Burroughs with the native Tulurans.  Unfortunately, the natives don't look native enough, so it's up to Siegel to convince them to dress like savages.

Reading Don't Go Near the Water is like watching an old sitcom that has aged remarkably well.  The humor is often predictable but generally sincere and the second to last chapter, focusing on everyone's reaction to the use of the nuclear bomb, is strangely touching, and perhaps presages Brinkley's post-nuclear-apocalyptic novel The Last Ship.  The humor is largely based on the absurdity of the PR division, the self-importance of its commanding officers, and the idiosyncrasies of the war correspondents.  From the novel:
"[Siegel] foresaw the day when there would be one Public Relations officer
for each combat man in the Navy, and the fleet commanded by the president
of the Associated Press, with a six-star rank of Admiral-Admiral, who would
decide on operations solely on the basis of their news value, with transmission
ships occupied by nothing but correspondents, with no operation dispatches
being permitted until the fleet was wiped out to provide a good news item." (p. 76)


In 1956, Don't Go Near the Water sold 165,000 copies, not including its book club sales.  The film rights were secured quickly, and a film adaptation starring Glenn Ford and Eva Gabor was released in 1957. 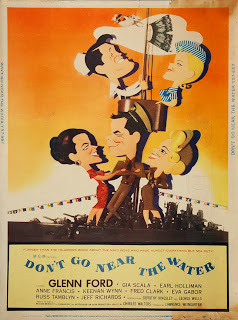 Don't Go Near the Water was reprinted in 2005, and TNT is apparently planning to release a made for TV version of Brinkley's The Last Ship next year.

I really like Don't Go Near the Water.  If you like humor, especially the type you'd find in good sitcoms, you should definitely give it a read.

Bestsellers of 1956:
1. Don't Go Near the Water by William Brinkley
2. The Last Hurrah by Edwin O'Connor
3. Peyton Place  by Grace Metalious
4. Auntie Mame by Patrick Dennis
5. Eloise by Kay Thompson
6. Andersonville by MacKinlay Kantor
7. A Certain Smile  by François Sagan
8. The Tribe That Lost Its Head by Nicholas Monsarrat
9. The Mandarins by Simone de Beauvoir
10. Boon Island by Kenneth Roberts