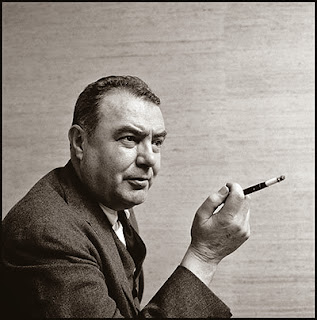 James Gould Cozzens (1903-1978) was born in Chicago but grew up in Staten Island.  He came from old money, a New England Governor on one side of the family and a colonial heritage on the other.  He attended Episcopalian schools.  He attended Harvard for two years and published Confusion, his first novel, in 1924.  In debt, he dropped out of Harvard and published his second novel in 1925, which, like his first, was not successful.  Cozzens went to Cuba to teach the children of Americans, but a year later he travelled through Europe as a private tutor.  In 1927, Cozzens married Sylvia Baumgarten, a literary agent who helped edit his future works.  His career took a turn for the better in the 1930s.  His short story, "A Farewell to Cuba," (1931) was nominated for an O. Henry Award.  His 1936 story, "Total Stranger" one first prize in that year's O. Henry Awards.

During World War Two, Cozzens served as a press liaison in for the Army Air Forces.  One of his main job duties was neutralizing stories that could potentially cause serious negative press for the military.  It was his experiences here that formed the basis for his Pulitzer-Prize winning novel, Guard of Honor (1948). His first novel after Guard of Honor was 1957’s bestseller, By Love Possessed.  The success of the work was as much a curse as a blessing.  Cozzens writing style, which is admittedly Victorian, as well as the rather conservative morality of his novels, made him the epitome of the old guard of American fiction at a time when writers like John Updike and Philip Roth were becoming mainstream.  Cozzens, despite his fame, generally gave very few interviews, a habit he broke for the September 2, 1957 issue of Time (By Love Possessed was released August 26th).  His interview led to further denunciation by his critics.

The next year, Cozzens and his wife moved to Williamstown, Massachusetts. Cozzens published his last novel, Morning, Noon and Night in 1968.  He lived out of the spotlight until his death from pneumonia in 1978. 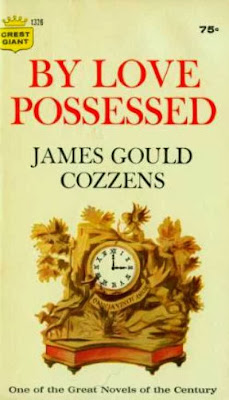 The title By Love Possessed made me assume the novel would be a trashy romance.  Instead, it is a look into the life of Arthur Winner Jr., a small town New England lawyer, a partner in the firm his deceased father founded with Noah Tuttle, a current partner and father of Winner Jr.’s first (and now deceased) wife.  The novel takes place over the course of a couple days, and is primarily focused on Winner’s coming to terms with revelations about the ethics (or lack thereof) of his partners and himself.

The story’s action, well, maybe action isn’t the right word.  It’s wrong to say that nothing happens in this novel, but most of what happens is consequent to action, lies in the effect it has on the Winner.  It is a heavily introspective novel.  This is not a bad thing, in and of itself, but it becomes complicated by Cozzens style.  In the first section, I stated that Cozzens has a Victorian style.  Cozzens is also technically skillful.  The sentences are complex and crafted wonderfully.  However, it seems out of place.  There’s a quote I find myself going back to frequently, from John Barth’s essay, “The Literature of Exhaustion.”  It goes: “In any case, to be technically out of date is likely to be a genuine defect: Beethoven’s Sixth Symphony or the Chartres Cathedral, if executed today, might be simply embarrassing.”  This of course leads to a lot of literary theory-type-questions, not the least of which being ‘does the time in which the novel was produced necessarily affect the interpretation of its prose?’  Cozzens writes like a (very talented) nineteenth century writer, or at least a pre-modernist, though he’s writing in the era of Pynchon and Gaddis, and Kerouac and Burroughs (William, not Edgar).  There’s no question that people like Pynchon wrote complicated sentences, rife with allusions (more on this in a moment), but the tone strikes back to the Romantics.  Describing a clock in dead father’s study, designed with a girl and cherub:

“The little god was about to conquer all. Indeed, he did conquer all.  L’esprit est toujours – yes, Always! – la dupe du Coeur! So cuddlesome in form, he was the heart, the baby lord and master of the head. His victory was love – love’s bliss of thoughtlessness.  Love pushed aside the bitter findings of experience.  Love knew for a fact what was not a fact; with ease, love believed the unbelievable; love wished and made it so.  Moreover, here where love’s weakness seemed to be, love’s strength resided.  Itself all unreality, love was assailed by reality in vain.  You might as well wound the loud winds, kill the still-closing waters.” (10)

This type of apostrophizing would be right at home in Dumas or Austen, and would there be a splendid passage, but it’s hard to reconcile something like this in the middle of a book written and taking place in the 1950s.  I mentioned the use of references earlier, and there are two in that above passage.  The first being the French phrase (in English, “The mind is always the dupe of the heart”) from François de la Rochefoucauld’s Maximes, published in 1655.  The last line of the passage is lifted from The Tempest (Act III, Scene 3). Shakespeare is subtly and frequently invoked, as are numerous other literary figures, the first chapter alone introducing Robert Browning and Thomas Moore, in addition to the above mentioned (and any I may have missed).

The story itself is strong, although the narration can be repetitive at times.  Winner has to deal with questions about his partners’ trustworthiness, his own infidelities, and managing a case of a man accused of rape.  But the real story is Winner’s loss of innocence and his struggle with his conscience, which may not sound like typical fare for a bestseller.  Then again, this was Cozzens first novel since his Pulitzer-winning Guard of Honor, and was itself nominated for a Pulitzer (and won the William Dean Howells Medal in 1960), so it’s not too difficult to see how it became a success, especially with the controversy mentioned in the author section of the review.

Like almost every book I’ve reviewed on the list so far, By Love Possessed was adapted for the screen.  The 1961 version focused more on Arthur’s infidelity, with Lana Turner as Marjorie Penrose. 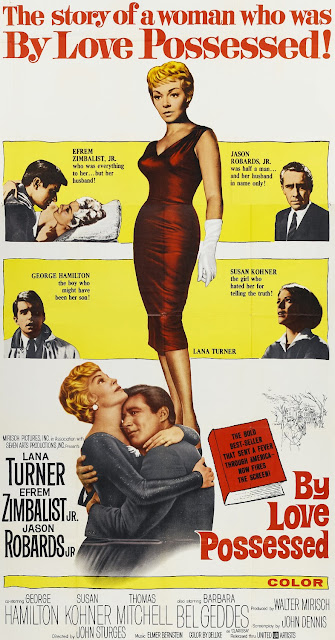 Winner was played by Efrem Zimbalist Jr., who today might be best known for playing the voice of Alfred Pennyworth in almost every animated version of Batman since the early ‘90s.

All qualms about its timeliness aside, By Love Possessed is a good book.  At the same point, I can’t think of who it would be good for.  Usually I try to avoid simply saying read/don’t read this book, and focus more on what tastes would this book match and which would it not.  But due to this weird mismatch between the style and the content, I’m not sure.  If you don’t like books that delve into ethics and focus on introspection instead of action, you won’t like By Love Possessed.  If you do, and you like the style, it would certainly be worth a chance if you happen to run across it.  I’m sure there’s a demographic that this novel is perfectly suited for, but I can’t think of what that would be off the top of my head.