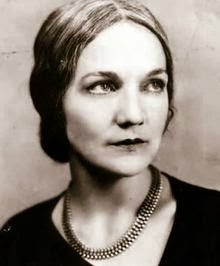 Katherine Anne Porter (1890-1980) was born Callie Russell Porter.  Her father was a farmer in Indian Creek, Texas, until his wife, Katherine’s mother, died in when Katherine was only two years old.  Her father then moved the family to his mother’s home in Kyle, Texas.  His mother was named Catherine Anne Porter and was the main adult figure from the author’s childhood.

Catherine died in 1901, and the Porter family moved to San Antonio, where Katherine was briefly enrolled at a private dramatic arts school, before financial hardships made tuition untenable and the family moved to Victoria, Texas.  In 1906, sixteen year old Porter married John Koontz and converted to Roman Catholicism.  She left Koontz in 1914, and went to Chicago to take up work as a film extra.  When she officially divorced Koontz in 1915, she changed her name from Callie Russell to Katherine Anne.

In addition to the divorce and name change, 1915 was the year Porter moved to Dallas and came down with tuberculosis.  While recovering from the disease, she befriended Kitty Crawford, who ran the Fort Worth Critic with her husband.  She hired Porter, setting her on the path of being a professional writer.  In 1919, she moved to New York, where she made a living doing PR and ghostwriting and developed a relationship with the Mexican revolutionary movement, later taking trips through Mexico (just six years after Ambrose Bierce’s disappearance down south).

Porter married Ernest Stock in 1925 but the two divorced soon after.  She published several short stories near the end of the 1920’s and her first short story collection, Flowering Judas and Other Stories was published in 1930.  Porter was awarded the Guggenheim fellowship in 1931, then left for Europe with Eugene Pressly, who she would marry in 1933 in Paris.  She returned to the U.S. in 1936 and divorced Pressly in 1938, marrying Albert Erskine ten days later and divorcing him in 1942. 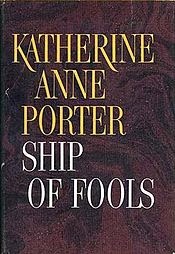 
The majority of Ship of Fools takes place aboard the German ship Vera, traveling from Veracruz, Mexico to Germany in the Fall of 1931. Porter includes a list of characters, their nationalities, and who they are bunkmates with, at the beginning of the book, and it's a necessary inclusion.  Their are nearly forty named characters on that list, and many unnamed ones (e.g. "the bride" and "the political agitator").  All are heading to Europe with hopes of some kind, an easy retirement, financial success, a recaptured youth, etc.

Porter said of the novel: "My book is about the constant endless collusion between good and evil; I believe that human beings are capable of total evil, but no one has ever been totally good: and this gives the edge to evil."  The human flaws, nationalism, bigotry, cowardice, and indifference that would lead to the rise of Nazism are to be found in the passengers of the Vera.  The story is in many ways hermetic, focusing on this one group almost always at sea, the plot arising entirely out of the characters interactions and introspections.  As I previously mentioned, there is a large cast of characters and no main character, which at times make the novel seem to have forty subplots, but no main plot.  While the individual vignettes are generally fantastic, the structure makes the novel flow like, well, a month-long sea voyage.  Now, this may be intentional, like the increasing complexity and incomprehensibility of Heart of Darkness, or the the hallucinatory/surreality of Gravity's Rainbow, but I can't help feel that Ship of Fools is really a novel of stories, except the stories flow into each other instead of having their own space to breathe.

Quibbles about how the story should be structured aside, Porter creates complex characters who behave in a realistic fashion.  I wrote that the subject was human interaction but humanity's flaws would work as well.  As cliche as the phrase "scathing indictment" may be, I think it may be accurate to apply it here.  Ship of Fools is a scathing indictment of mankind's small-mindedness and capacity for evil.

Porter was in her 70s when Ship of Fools was published and had a sterling reputation to launch the book from.  The critical reviews were generally very positive and a film version was produced in 1965, starring Vivien Leigh (Scarlett in Gone with the Wind) in her last film role. 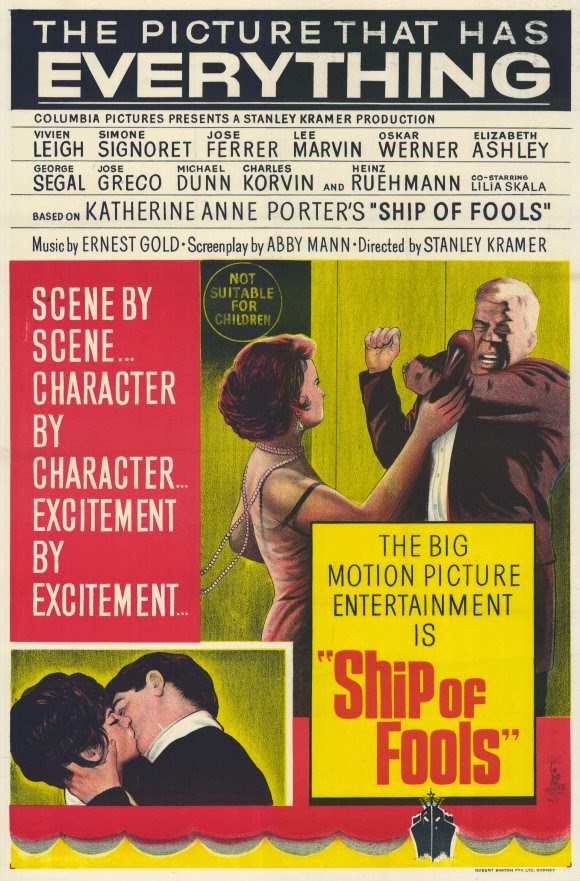 I feel like I would have enjoyed Ship of Fools more if I had less of a schedule to maintain.  It's not a quick read, but if you have the time and patience, and like character driven realism, then Ship of Fools is a good choice.

Bestsellers of 1962:
1. Ship of Fools by Katherine Anne Porter
2. Dearly Beloved by Anne Morrow Lindbergh
3. A Shade of Difference by Allen Drury
4. Youngblood Hawke by Herman Wouk
5. Franny and Zooey by J. D. Salinger
6. Fail-Safe by Eugene Burdick and Harvey Wheeler
7. Seven Days in May by Fletcher Knebel and Charles W. Bailey II
8. The Prize by Irving Wallace
9. The Agony and the Ecstasy by Irving Stone
10. The Reivers by William Faulkner