1963: The Shoes of the Fisherman by Morris West 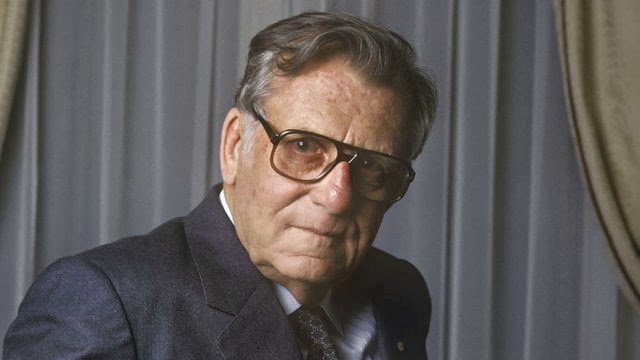 Morris West (1916-1999) was born near Melbourne, Australia.  He received a B.A. from the University of Melbourne in 1937, and taught modern languages and mathematics in New South Wales and Tasmania.  He spent twelve years studying with the Christian Brother Order, studying for the priesthood, but left in 1941. West gained notoriety as a director with Australasian Radio Productions, where he worked from 1943-53. He left Australia in 1955, taking up residence in numerous countries on multiple continents.

His first book, Moon in My Pocket, was published under the pseudonym Julian Morris in 1945.  His next book was published in 1956.  Between 1956 and 1959, he published eight books, under his own name and the pseudonym Michael East.  The most famous of these, at the time, was 1959's The Devil's Advocate, which he wrote after spending six months as the Daily Mail's Vatican correspondent.  The book received critical and commercial success.  The next novel published under his own name, Daughter of Silence, was the #8 bestselling novel in the U.S. for 1961.  The Shoes of the Fisherman (1963) was his biggest commercial success.  He appears on the top ten annual bestsellers list twice more, in 1965 for The Ambassador and in 1968 for The Tower of Babel. 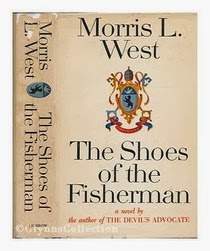 "The pope is dead."  Now the cardinals must elect a new pope, and the unlikely electee is the new Ukranian cardinal, Kiril, now Kiril I, who spent 17 years in a Siberian prison camp and only escaped to the West three days before the election.  Or was he released?  Switching between an omniscient third person narration and excerpts from the new pope's secret diary, we are given a picture of a man who, within the course of a year, went from a prisoner to a pontiff (although Kiril isn't sure there's much of a difference).  Now Kamanev, the man who tortured and tried to destroy him (and is rumored to have orchestrated his release), is leader of the Soviet Union, and it's up to Kiril to try to prevent a war between U.S. and the U.S.S.R.    This takes place among a few subplots, the political intrigue of the Vatican, and frequent pontificating on faith, goodness, etc.

This is far from the first book about priests on my list.  The bestselling novels of 1913, 1927, 1935, 1941, 1942, 1943, 1948, 1950, 1952, and 1953 have been about priests, preachers, and prophets and saints.  The Shoes of the Fisherman happens to be the meeting point between the religious trend pre-1960s, and the political thrillers/conspiracy novels to come (e.g. le Carré, Ludlum, Clancy, Brown).  Of the lot Elmer Gantry (Sinclair Lewis, 1927) is my favorite.  Shoes is tied for second for my favorite of the priest novels, alongside Cronin's The Keys of the Kingdom (1941).  While religion is obviously a huge part of the plot and character development, unlike most of the other priest novels, it's not just preaching to the choir (pun intended).   West creates a pope who is unsure of himself, who is a complex character with serious doubts and insecurities: he creates a human character, not an archetype or a caricature.  Many of the lead priest characters are two dimensional, or are given flaws that are entirely affected, flaws that are only one small life-lesson from being completely vanquished.

The novel was adapted for the screen in 1968, starring Anthony Quinn as Pope Kiril I and Laurence Olivier as Kamanev. 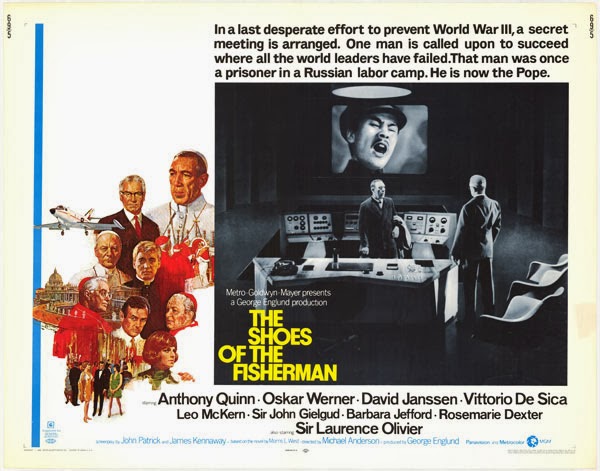 I apologize for the brevity of this week's review.  A lot of coursework is piling up and I have to get around to that, too (and maybe have a social life?).  Anyway, The Shoes of the Fisherman is a good political intrigue novel, and a good priest novel.  If either or both of those interest you, this would be a good choice.

1. The Shoes of the Fisherman by Morris West
2. The Group by Mary McCarthy
3. Raise Hight the Roof Beam, Carpenters, and Seymour: An Introduction by J.D. Salinger
4. Caravans by James Michener
5. Elizabeth Appleton by John O'Hara
6. Grandmother and the Priests by Taylor Caldwell
7. City of Night by John Rechy
8. The Glass-Blowers by Daphne du Maurier
9. The Sand Pebbles by Richard McKenna
10. The Battle of the Villa Fiorita by Rumer Godden