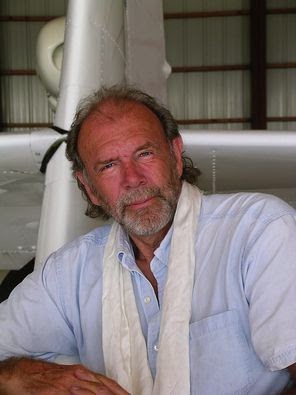 Richard Bach (1936-     ) was born in Oak Park, Illinois.  In 1955, he attended Long Beach State College (now California State University, Long Beach), before joining the joining the US Air Force as a pilot.  In 1957, he married his first wife, Bette Franks, with whom he had six children.  (They divorced in 1971.)  His first three books were non-fiction works about aviation: Stranger to the Ground (1963), Biplane (1966), and Nothing by Chance: A Gypsy Pilot's Adventures in Modern America (1969).

His first and most popular novel, Jonathan Livingston Seagull, was published in 1970 with only a limited run (the publisher was not optimistic about its success).  From here he had a long (and continuing) career in fiction, his next novel, 1977's Illusions: The Adventures of a Reluctant Messiah placing on the top ten annual bestseller's list in 1977 and 1978.  Bach has continued writing fiction and non-fiction up to the present, his most recent book being 2014's Illusions II: The Adventures of  a Reluctant Student. 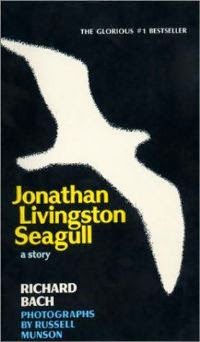 Jonathan Livingston Seagull is about a seagull named, well, Jonathan Livingston Seagull.  Unlike the rest of  his flock, Jonathan loves flying for its own sake.  This attitude ends up annoying the flock, who are only concerned with the day-to-day tedium of catching fish, and Jonathan ends up being exiled from the flock.  In solitude, he learns to fly faster and higher than any other seagull alive.  Then he dies, but he's escorted by two golden seagulls to the next plane of existence.  It turns out that there's a reincarnation system, where a love of flying for its own sake gets you to the next level.  Eventually, Jonathan learns to fly instantly, to any point in space or time (because the only thing between the rest of the universe and you is your own inhibitions).  He decides to go back to the first plane and teach the seagulls there.  He becomes a Jesus figure, complete with disciples, raising the dead, and persecution from among his own people.

The whole thing is interspersed with photographs of seagulls.  That is to say, there are nearly as many pages of photographs as there are of text.

Bach himself said that there wasn't much of an underlying message to the novel besides to find what you love and go at with everything you've got, but I'm not one for the intentional fallacy.  Unsurprisingly, this book has been seen as everything from a simple self-improvement story to spiritual text.

Honestly, to me it seems very dated to the 60s-70s period, with the pseudo-spiritual appropriation of Eastern belief systems (consider popular figures like John Lennon, as well as the resurgence of Siddhartha among young readers, the burgeoning popularity of transcendental meditation, among numerous other trends), combined with a pretty stinted Christian aspect, and a message of 'society just needs to focus on what it loves' message.  Don't get me wrong, it seems to be completely in earnest, but I think the entire thing can be summed up in an inspirational poster.

I'm being a bit cynical.  Bach, after all, never claimed to be some spiritual leader, and was in fact dismayed at the amount of mail he got from people asking what the novel was really about.  Is it any wonder his next novel is about a man who, after being proclaimed a messiah by the public, gets tired of it and starts a career selling biplane rides?  I try not to grudge people their joys, and while I may find the novel trite, someone who hasn't been exposed to any of the philosophies above mentioned could find it revelatory.

Jonathan Livingston Seagull's place on this list is interesting for two reasons.  1. It was the bestseller for two consecutive years. 2. It was first published in 1970.  Like I mentioned in the author section, the publishers of JLS didn't have much faith in it, and only printed 7,500 copies in the initial run.  It became popular quickly, and as the book wasn't immediately available, it became mysterious and desirable.  The media kept reporting on its popularity which, in a sort of positive feedback loop, caused it to be more popular, causing more reporting of its popularity, etc. etc.  (This is a tried and true technique.  Consider the unaccountable popularity of last year's film The Purge.  At least the reporters of JLS waited until the book was released to start publicizing it.)

So of course there was a film. 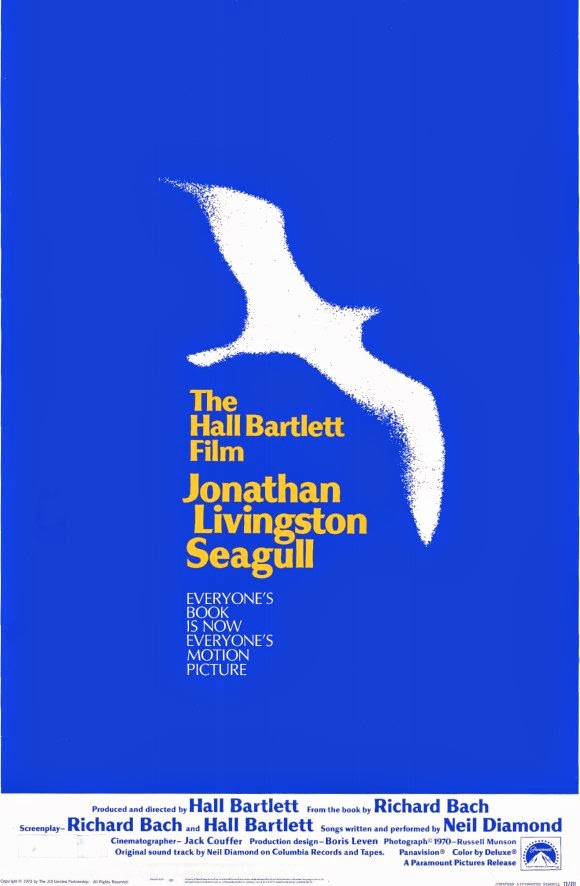 The film used remote control planes designed to look like pigeons for many of the aerial shots, was nominated for best cinematography and best editing, and had a soundtrack by Neil Diamond.  Those are the high points.  The film was almost universally panned, to quote Roger Ebert:

It is based, to begin with, on a book so banal that it had to be sold to adults; kids would have
seen through it. "The Little Engine That Could" is, by comparison, a work of some depth and
ambition. Consider that the movie made from the book has now been made the object of a
lawsuit by the book's author and you have some measure of the depths to which we sink as
Jonathan dives.

Bach did, in fact, sue Paramount due to the discrepancies between the book and film.  It turns out the director had a clause in his contract requiring any changes to be accepted by Bach, which wasn't honored, leading to court-ordered rewrites.  Not only did Bach sue, but Neil Diamond sued, claiming that too much of his music was cut from the film.  All in all, it was a disaster.

I'm at a loss of who to recommend this book to.  Anyone who is reading a lit blog with an emphasis on the history of popular literature will probably be familiar enough with everything in the book to find it pretty lackluster.  I rarely use this summation paragraph to recommend other books, but I'm going to do that now. It's Julio Cortazar's From the Observatory (1972). Like Jonathon Livingston Seagull, it's short (in the 100-120 page range) and uses photographs (in this case of a bizarre 18th-century royal Indian observatory).  There isn't much of a narrative to it, and it's been called everything from a novel to a book of poetry.  As pretentious as it may sound, it's more like a long philosophical musing on man's place in the universe, examined through the constructs of this observatory and the life cycle of eels. It's a pretty neat book.

1. Jonathan Livingston Seagull by Richard Bach
2. August 1914 by Aleksandr Solzhenitsyn
3. The Odessa File by Frederick Forsyth
4. The Day of the Jackal by Frederick Forsyth
5. The Word by Irving Wallace
6. The Winds of War by Herman Wouk
7. Captains and the Kings by Taylor Caldwell
8. Two from Galilee by Marjorie Holmes
9. My Name is Asher Lev by Chaim Potok
10. Semi-Tough by Dan Jenkins

1. Jonathan Livingston Seagull by Richard Bach
2. Once Is Not Enough by Jacqueline Susann
3. Breakfast of Champions by Kurt Vonnegut
4. The Odessa File by Frederick Forsyth
5. Burr by Gore Vidal
6. The Hollow Hills by Mary Stewart
7. Evening in Byzantium by Irwin Shaw
8. The Matlock Paper by Robert Ludlum
9. The Billion Dollar Sure Thing by Paul E. Erdman
10. The Honorary Consul by Graham Greene

Watership Down by Richard Adams
Invisible Cities by Italo Calvino
The Princess Bride by William Goldman
The Stepford Wives by Ira Levin
Child of God by Cormac McCarthy
Sula by Toni Morrison
Zen and the Art of Motorcycle Maintenance by Robert Pirsig
Gravity's Rainbow by Thomas Pynchon
Fear and Loathing in Las Vegas by Hunter S. Thompson