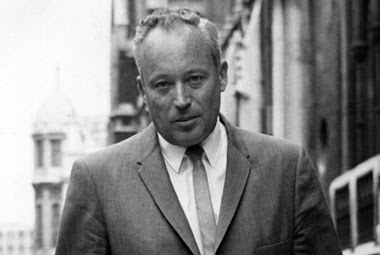 Leon Uris (1924-2003) appears one other time on the annual best-seller list, for 1959's Exodus.    Leon Uris (1924-2003) was born in Baltimore, Maryland.  His parents were Jewish immigrants from eastern Europe.  Uris never finished high school, opting to drop out and enlist in the Marine Corps during his senior year.  He served in combat in Guadalcanal.  After the war, Uris moved to San Francisco with his wife, also a former Marine.  While there, he worked for a local newspaper.  In 1953, his first novel, Battle Cry, was published to huge popular success.  From there he was given a job in the story department of Warner Brothers Studios.
In 1955, he released his second novel, The Angry Hills and, in 1956, penned the screenplay for Gunfight at the O.K. Corral.  In 1958, he published Exodus, which became a runaway success, becoming the first of two annual bestsellers on this list and earning him a considerable fan following. In 1961, Uris released Mila 18.  Trinity was published in 1976, and was inspired by a trip Uris and his third wife took to photograph modern Ireland.  Uris kept writing until his death in 2003.  He was married three times over the course of his life and had five children.  He died of renal failure.

Trinity primarily follows Conor Larkin, a poor Irish Catholic living in mid-to-late 19th century Ireland.  Much of the beginning of the novel is spent detailing the wretched conditions the Irish were forced to live in at the hands of the British, the local culture of small town Irishmen, and the history of attempted rebellion against the British.  Conor's story is the typical hero's journey of the historical fiction of an oppressed people.  Through personal strength and courage, Conor rises to fight the British rule as a leader of men.

Published in 1976, and detailing a time period over a hundred years past, Trinity was still topical when it was written.  The period between the late 1960s and 1998 in Northern Ireland is referred to as The Troubles.  Violent attacks and acts of retribution were frequent between Irish Republican Army (IRA) splinter groups and British occupation forces, and between different splinter groups as well. The basis of the groups' attacks was the continued occupation of Northern Ireland by the British and a desire for Irish self-rule.  The conflict was a major subject in the news for decades.  The violence hit it's height in the 1970s, around the time Trinity was written and published.

The novel puts the modern conflict in its historical context, as part of the Irish's centuries long attempt at overthrowing their colonizers.  When researching Uris, claims that he was merely a propagandist pop up frequently, mainly pointing to the one-sided good vs. evil, freedom vs. tyranny approach to the stories.  While I agree that Trinity is certainly one-sided, I don't think it would be propaganda inasmuch as it is an attempt to merely demonstrate the opposite side's view.  Trinity is also a product of the time it was written in, and functions as an attempt to explain and understand the perspective and history of the bad guys (i.e. IRA sects).

As far as the book itself goes, I feel Uris, like Michener and Hailey, gets too bogged down in detail.  Uris tries to function almost as a documentarian of 19th century Ireland, and the balance between providing mountains of information and storytelling is difficult to maintain for extended periods of time, leading to a narrative that moves in spurts.

That said, if you are the type of person who likes your historical fiction long, winding, and full of detail, you'll probably like Trinity.  If you like Trinity, Uris wrote a sequel to it 1995, titled Redemption.

1. Trinity by Leon Uris
2. Sleeping Murder by Agatha Christie
3. Dolores by Jacqueline Susann
4. Storm Warning by Jack Higgins
5. The Deep by Peter Benchley
6. 1876 by Gore Vidal
7. Slapstick or Lonesome No More! by Kurt Vonnegut
8. The Lovely Lady by Harold Robbins
9. Touch Not the Cat by Mary Stewart
10. A Stranger in the Mirror by Sidney Sheldon

Will You Please Be Quiet, Please by Raymond Carver
Ordinary People by Judith Guest
Roots: The Saga of an American Family by Alex Haley