1980: The Covenant by James Michener 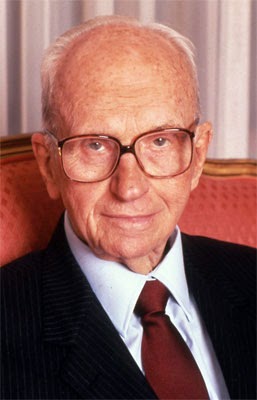 James Michener (1907-1997) was adopted by a Quaker from Doylestown, Pennsylvania.  He attended Swarthmore college for English and psychology, graduating with honors in 1929.  After a couple years spent abroad, Michener returned to Pennsylvania to teach high school English.  In 1935, he married his first wife, Patti Koon, then earned his Masters and taught briefly at Harvard before becoming an editor for Macmillan Publishers.
Michener served in the South Pacific during WWII.  His experiences there provided the basis for his first novel, Tales of the South Pacific (1947), which won the Pulitzer for fiction in 1948 and was adapted by Rodgers and Hammerstein for the stage, under the title South Pacific.  In 1948, Michener divorced Koon and married Vange Nord.  Michener appeared in the top 10 annual bestsellers list twice in the 1950s, and fifteen times over the course of his life, taking the top spot four times.  In 1955, he divorced Nord and married Mari Sabusawa.  In 1977, Michener recieved the Presidential Medal of Freedom.   He died of kidney failure in 1997. 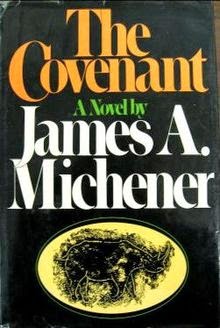 The Covenant is the last Michener book on my list, and I honestly don't plan to read any others.  I went into more detail on my problems with Michener's approach to history in my review of Centennial, and it holds true to The Covenant as well.  The Covenant focuses on the history of South Africa, as usual focusing on a few ethnically/religiously/politically different dynasties, each meant to illustrate a particular point of view in an ongoing struggle, in this case the English imperialists, the Dutch/Huguenot immigrants, and the native Africans.  The novel focuses primarily on the late 15th century up to 1979.

Part of the problem with Michener's style (from my perspective), is that he never seems to know which details are important and which aren't, leading to constant info dumps of relatively little, if any, use.  As a contemporary NY Times review notes: "His personal covenant is not with God, but with the encyclopedia. If, 15,000 years ago, in the African bush, the San used poison arrows, he will describe those arrows and name the source of the poison."  Michener gives us broad strokes for the people and the thought processes of the times, while going into great detail on what type of plates they ate off or how exactly they wore particular items of clothing.  This devotion to minutiae would be better served when constructing characters.  While the broad strokes are fine for providing a layman's history to an audience new to the subject matter, the sheer volume of the books (in terms of word count and epochs described) makes me question the necessity of the reduction.

While Centennial was the only one of the four Michener novels I read that got a television adaptation, The Covenant has a legacy of its own.  It is the center of what may be very legitimate plagiarism claims by Michener's researcher, Errol Uys.  Michener's biographer, Stephen May (Michener: A Writer's Journey) takes Uys's side.  It seems that Uys wrote numerous pages-long sections of The Covenant, but was refused any credit for it.

Controversy aside, The Covenant is pretty standard Michener fare.  It is structurally and stylistically similar to his other novels, just about South Africa this time.

1. The Covenant by James Michener
2. The Bourne Identity by Robert Ludlum
3. Rage of Angels by Sidney Sheldon
4. Princess Daisy by Judith Krantz
5. Firestarter by Stephen King
6. The Key to Rebecca by Ken Follett
7. Random Winds by Belva Plain
8. The Devil's Alternative by Frederick Forsyth
9. The Fifth Horseman by Larry Collins and Dominique Lapierre
10. The Spike by Arnaud de Borchgrave and Robert Moss