1988: The Cardinal of the Kremlin by Tom Clancy 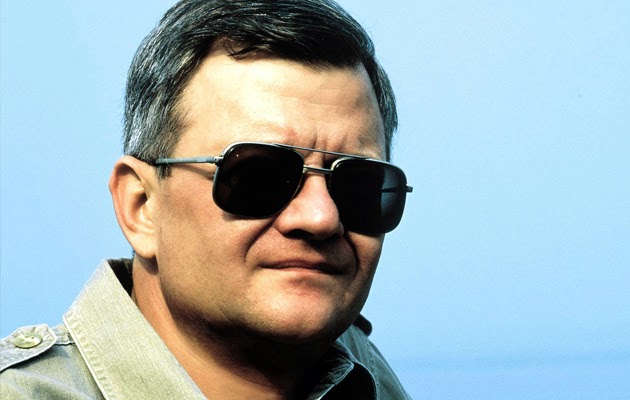 Tom Clancy (1947-2013) was born and raised in Baltimore, Maryland.  He attended Loyola College.  While there, Clancy joined the ROTC, but was unable to serve due to poor eyesight.  He graduated in 1969, and married Wanda Thomas King, with whom he had four children.  Throughout the 1970s, he worked as an insurance agent, eventually buying a small firm from his wife's grandfather.  A military history buff, Clancy began writing a novel, The Hunt for Red October, which was published by the Naval Institute Press in 1984, to unexpected commercial success.  His second novel, Red Storm Rising (1986), and his third novel, Patriot Games (1987) were the second-bestselling novels of their years of release.  His fourth and fifth novels, The Cardinal of the Kremlin and Clear and Present Danger, respectively, took the number one spot.

Clancy and his wife separated in 1996, divorcing in 1999.  Later in 1999, he married Alexandra Marie Llewellyn, whit whom he had one daughter. Clancy died at Johns Hopkins in 2013.

The Cardinal of the Kremlin takes place during the Cold War, as the U.S. and the U.S.S.R. both try to develop laser-based missile defense systems, the success of which would change the balance of power in regards nuclear or ICBM warfare.  Meanwhile, the USSR has invaded Afghanistan, and the CIA is funding a group of Mujaheddin, led by a former teacher known as The Archer.   The CIA supplies weapons in return for information taken from Soviet planes and camps.

The main body of the narrative details the cat and mouse game between Soviet and U.S. intelligence, especially as regards Colonel Filitov, a high ranking Soviet war hero who has been feeding information to the U.S. for decades under the codename Cardinal (hence the title). Along with lengthy descriptions of the nature and consequence of the defense projects, Clancy spends a lot of time detailing methods of spycraft and political maneuvering.

In the U.S., the intelligence community, including Clancy's recurring characters Jack Ryan and Mr. Clark, is set into action when Filitov's identity is compromised.  And on the other side of the iron curtain, Gerasimov, the head of the KGB with dreams of ruling the USSR, is trying to consolidate power.

The technology and the procedures of the nations' military and intelligence agencies take priority in the novel, the characters mainly only important in regards to the type of people they represent, and how those people fit into the aforementioned agencies.  The descriptions of military equipment or spycraft techniques are often digressive, but not too much so.  Clancy's understanding of how much information is too much is better than Michener's or Auel's.  Whereas the latter two would (and have) spent pages discussing the nature of the dirt the characters are standing on, Clancy might write just a paragraph, and only then to discuss how it affects the tactical strategy of the terrain.   When reading Michener or Auel, it always seems like what they really wanted to do was write a textbook, and while Clancy does occasionally get like this, it happens far less often.

Overall, though, The Cardinal of the Kremlin is a lot like a high-tech chess match.  Each side is trying to think several moves ahead, but plans constantly shift with the circumstances.  Like a chess match, there are dull moments, the players stopping to fortify their positions, or regroup, and some quite exciting moments when pieces get taken off the board in rapid succession.  But, since I've already set up a chess metaphor and might as well drive it into the ground, unlike chess,  not everything is black and white.

Clancy's novel is a product not only of the cold war, but of the last years of the cold war.  A shift from offensive to defensive warfare, the decreasing power of the KGB, and a power struggle between Western friendly and nationalist government leaders are all important trends throughout the book.  Like le Carré's The Spy Who Came in from the Cold, the Soviet officials aren't depicted in the typical red menace villain formula.  Some are ideologues, some are honestly interested in improving the lives of the soviet people, some are power hungry.  Unlike le Carré, Clancy doesn't really give the same treatment to the U.S. intelligence officials, the worst of whom are depicted as misinformed but with good intentions.  (If I had to choose one, The Spy Who Came in from the Cold is the superior novel.)

Clancy's novel is interesting for another, unintentional reason: historical irony.  Typically, historical irony refers is a specific type of situational irony, that specifically requires the passage of time.  For example, the U.S. supplying the Mujaheddin with weapons to fight our mutual enemy, only for those weapons to be used against the U.S.  Although a form of situational irony, I would argue that it also functions as a form of dramatic irony (the former indicates only that the situation is ironic, whereas the latter refers to how one reads a text with knowledge the characters don't have).  Clancy portrays the Mujaheddin as noble freedom fighters protecting their country from enemy invaders.  That the Mujaheddin developed into the Taliban is something that Clancy couldn't have known, and unintentionally provides the counter-balance between U.S. and Soviet tactics in the close days of the Cold War.

The Cardinal of the Kremlin's legacy is less prestigious than other Clancy novels.  No movie was made, but it is the first book on my list to get a video game adaptation.  It was a resource management game released for the Amiga in 1990.


The Cardinal of the Kremlin was an entertaining read.  If you're interested in military/spy thrillers, well, you've probably already read a bunch of Clancy, but if you haven't give this one a look.  If it's not a genre you enjoy, you probably won't like this one (although I do recommend The Spy Who Came in from the Cold).

1. The Cardinal of the Kremlin by Tom Clancy
2. The Sands of Time by Sidney Sheldon
3. Zoya by Danielle Steele
4. The Icarus Agenda by Robert Ludlum
5. Alaska by James Michener
6. Till We Meet Again by Judith Krantz
7. The Queen of the Damned by Anne Rice
8. To Be the Best by Barbara Taylor Bradford
9. One by Richard Bach
10. Mitla Pass by Leon Uris

"The Cardinal of the Kremlin." VideoGameGeek. BoardGameGeek, LLC. Web.