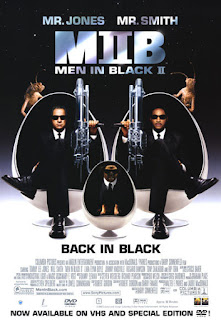 Director: Barry Sonnenfeld
Runtime: 88 Minutes
Everyone remembers the 1997 modern classic, Men in Black.  It ends with agent K (Tommy Lee Jones) asking agent J (Will Smith) to erase K's memory, so he can retire and lead a normal life.  The first act of MIB 2 is mostly about undoing the ending of the first film.  The movie opens with exposition via a public access quality conspiracy tv show, explaining that an evil Kylothian named Serleena (Lara Flynn Boyle) wants to steal the light of Zartha.  It turns out the light is still on earth, and only K knows its location.
There are a lot of problems with this movie, especially the over reliance on comedic relief characters.  Remember Frank the pug from the first movie, and how funny that one scene with him was?  One scene is really all that you can stand.  Likewise the worms, and the two-headed Johnny Knoxville.
Also, the product placement is far from subtle.

All that said, Men in Black 2 isn't really that bad.  I mean, it's pretty bad, but it's not as much of a trainwreck as I remember it being.  I was worried that it would be unwatchable, but much of it is entertaining.  It's a big decline in quality from the first film, but not a completely irredeemable one.


The Cross Section:
David Cross plays Newton, the conspiracy minded nerd who runs a video rental store and lives with his mom. 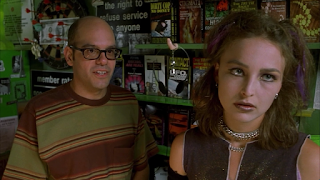 This is actually one of the funniest scenes in the movie, which unfortunately does not appear by itself on youtube.