1919: The Four Horsemen of the Apocalypse by Vicente Blasco Ibáñez 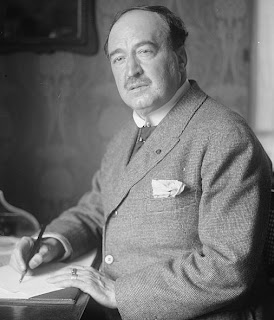 Who?
Vicente Blasco Ibáñez (1867 – 1928) was born in Valencia, Spain. Blasco Ibáñez (Spanish naming conventions put the family name, Blasco, second to last) was a political activist Spain’s transition from a monarchy to a republic, from a republic back to a monarchy, and the loss of much of their western territories to rebellion and conquest in the Spanish-American War.   He was briefly exiled and later imprisoned for his political support of Cuban independence.  In 1910, he founded two colonies in Argentina: Nueva Valencia and Cervantes.  His best known novels (in the English speaking world) are Blood and Sand (Sangre y Arena) and The Four Horsemen of the Apocalypse (Los Cuatros Jinetes Del Apocalipsis), both of which became films in the early 1920’s, launching the career of silent film star Rudolf Valentino.

The Four Horsemen of the Apocalypse was published in Spanish in 1916, and translated to English in 1918.

So what's it about?
The story starts with Argentinean youth Julio Desnoyers on a ship to France.  Half French himself, Julio is travelling with a number of French and German travelers returning to Europe.  The first section of the book is split between Julio’s life as a wealthy libertine ‘artist’ in Paris and his father Marcelo’s life in Argentina after fleeing France to avoid service in the Franco-Prussian War in 1870.   The story continues to split its focus between Julio and his father.  The second section is lauding the brave service of the soldiers going out to war, and criticizing the cruelty and arrogance of the Germans.  Considering that the novel was published while the war was still ongoing, much of the pro-Allies discussion can be seen as propaganda, or at least an attempt to persuade readers of the time to enlist in the fight.

The book is strong throughout, but it shines at two points.  The history of the Desnoyers family in Argentina and the German invasion and defeat during the Battle of the Marne.  The prose beautifully displays the tragedy and inhumanity of war:

He went on toward the village – a mass of black walls with a few houses still intact, and             a roofless bell tower with its cross twisted by the fire.  Nobody in the streets sown with                 bottles, charred chunks of wood, and soot-covered rubbish.  The dead bodies had
disappeared –”

Why was it so popular?
In 1919, World War One was still on everyone’s mind, with over 100,000 American deaths and over 200,000 wounded in a war that changed who wars were fought.  Blasco Ibanez was already popular in Europe, and the book is quite good.

Why haven't I heard of it?
Blasco Ibáñez’s popularity in the United States has decreased over the decades since his death.  As with Mr. Britling Sees It Through, this novel has, like most World War One fiction, been overshadowed by non-fiction works and by novels about the Second World War. Also like Mr. Britling, The Four Horsemen of the Apocalypse was published in 1916, and doesn’t cover the end of the war.  Likewise, the propaganda aspect can be unappealing to some readers.

Should I read it?
Unless you can’t stand war novels, the answer is a resolute ‘yes.’  Despite its occasional preachiness, The Four Horsemen of the Apocalypse is a great novel.

You can watch the 1921 film version on Internet Archive

The Budding Within by Marcel Proust
Demian by Herman Hesse
The Magic of Oz by L. Frank Baum