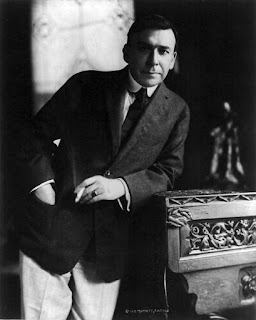 Who?
Booth Tarkington (1869-1946) appears twice on the list.  The first time was for 1915’s The Turmoil.  While he had great commercial and critical success with serious and mature novels (garnering two Pulitzer prizes in the process), he was also well known for his comedic fiction starring children and teenagers.   Penrod (1914), which followed the eponymous twelve-year old, was one of his bestselling books in terms of numbers of copies sold. Both Seventeen and Penrod and Sam (the sequel to Penrod) were published in book form 1916.

So what's this book about?
Seventeen was originally published serially in ten parts in Metropolitan Magazine beginning in January, 1915, before being published as an individual novel by Harper in 1916.  It tells the story of seventeen year old William Baxter and his summer spent trying to woo Lola Prat, the girl from out of town who he, and a number of his friends, have immediately fallen for.  William treats the situation with all the subtlety and rationality one would expect of a love-struck seventeen year old.  His wildly over the top responses to the rest of the world are hilarious and, as anyone who did not grow up in a cave can attest, embarrassingly true:

“He walked in his own manner, using his shoulders to emphasize an effect of carelessness which he wished to produce upon observers. For his consciousness of observers was abnormal, since he had it whether any one was looking at him or not.”

The cast includes bizarre and amusing characters like William’s ten year old sister Jane, the adventurous, free-spirited bane of William’s existence.  And of course, the love interest, the exasperating Lola Pratt, whose refusal to speak in any fashion other than ‘baby talk’ straddles the line between humorously annoying and cringe-worthy.

Seventeen is funny, even though at times the gags get a bit repetitive.  But at 185 pages, it doesn’t have a chance to drag.  The humor is largely based on the over-the-top love-strickenness of William and the overwrought nerves of the adults who have to deal with them.  All this is strung together with a heaping dose of slapstick.

Why was it so popular?
It certainly benefited from Tarkington’s popularity and the success of his other teenager stories.  It’s a short, fun read which would certainly boost its saleability.  On top of that, a silent film version of Seventeen was released in early November, 1916.

So why haven't I heard of it?
Seventeen remained popular for several decades after its publication.  In addition to the 1916 silent film, the novel was also adapted into a stageplay in 1918, a short-lived musical (Hello, Lola) in 1926, an Orson Welles radio broadcast in 1938,  a talkie in 1940, and lastly another musical in 1951. 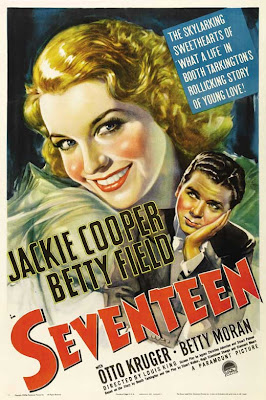 Eventually, Seventeen went the way of the rest of Tarkington’s oeuvre and faded into obscurity.

Should I read it?
As with The Turmoil, there are aspects of the story that do not translate well into modern attitudes.  Certain subplots (e.g. William’s quest for an evening suit) are far removed enough from modern culture that they lose much of their impact.  If you can overlook that and have the patience to deal with Lola’s (intentionally and humorously) grating personality, I’d gladly recommend it as light, fun reading.

You can read Seventeen on Project Gutenberg.
You can listen to the Orson Welles radio adaptation on Youtube.