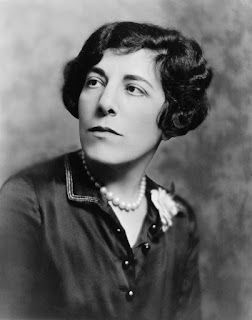 Who?
Edna Ferber (1885-1968) appears twice on my bestsellers reading list, the first time for 1924’s Pulitzer Prize winning So Big.  Ferber was born in Kalamazoo, Michigan and had a brief stint in journalism before moving on to fiction-writing, penning classics like Giant and Show Boat.

Ferber never married nor had children and her personal life and professional life were largely overlapped.  Along with critics, writers, and entertainers like Harpo Marx and Dorothy Parker, Ferber was a member of the Algonquin Round Table, an informal group that met daily at the Algonquin Hotel in New York City.

So what's this book about?
Cimarron takes place over a span of nearly three decades, from the opening of the Oklahoma Territory to homesteaders to the late 1910’s.  Its focus is on the Cravat family, especially the matriarch, Sabra Cravat.  Her husband, Yancey, convinced Sabra to leave “civilization” for the new frontier.  Yancey is a larger than life figure, a quick-draw sharpshooter with a mysterious past and wild ambitions.  He sets up a newspaper in the town of Osage, which Sabra ends up running, as well as raising her family and becoming a powerful figure in the town.

There are two main stories in Cimarron: Sabra and Osage.  Sabra goes into Oklahoma as a naïve girl, but grows self-sufficient.  While the characters in Cimarron are layered and fascinating, there is a lack of character development.  Sabra does become confident and, I’d argue, bitter.  However, for the most part, her opinions and beliefs don’t change as a result of any personal growth, but rather adapt to the circumstances around her. Seeing the novel as a story about the growth and development of Osage is at least as interesting as a story about the characters, as it goes from a lawless tent city to a new metropolis.

Why was it so popular?
Cimarron, like So Big, is a story of the growth of the American Midwest.  On one hand, it’s a story about the history of Oklahoma specifically, and America in general, on the other it’s an escapist Western with Indians and gun fights and bank robberies.  Although published in 1929, Cimarron became the bestseller of 1930.  The Great Depression began in the U.S. in late 1929, leaving a large percentage of the population out of work, and financially ruining many more.  In 1930, a severe drought began in Oklahoma, harming farming industry in the area (and paving the way for the Dust Bowl).  At a time when people were at their lowest, a novel that could provide escape while reminding them of the harsh trials overcome in their nation’s past would be popular.

Why haven't I heard of it?
Much of the action in Cimarron (bank robberies, shoot outs, etc.) are don’t occur on the page, but are told by one character to another.  The classic western hero is deeply flawed, as are all the characters (by which I mean they have human flaws, not that the characters are constructed poorly).  The parts of the novel concerning Native Americans are interesting: it’s not the politically incorrect murderous savage Natives of Zane Grey, but it’s not the dignified wise men of more modern popular culture.  None of the above are negative things, but they make Cimarron less of a fun and easy read than the likes of Zane Grey’s novels.  I don’t have a lot of experience with Westerns, so I can’t say with any certainty whether Cimarron maintains any sort of popularity within that community. 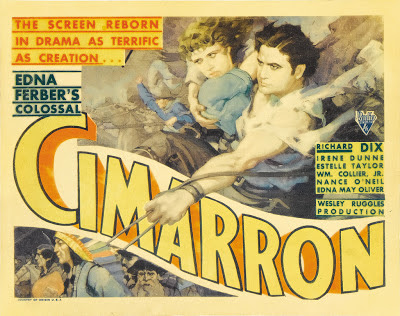 Film buffs may recognize the name.  The 1931 film version starring Irene Dunne and Richard Dix won Best Picture at the Fourth Academy Awards.  The 1960 version was nominated for two Oscars and starred Glenn Ford as Yancey Cravat.  (Glenn Ford, incidentally, played the lead in the 1962 version of 1919’s bestselling TheFour Horsemen of the Apocalypse.)

If you’re a fan of Westerns, definitely.  If not, I’d say there’s a fifty/fifty chance of you liking it.