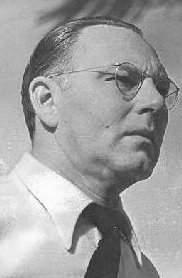 Who?
William Hervey Allen, Jr. (1889-1949) was born in Pittsburgh, Pennsylvania where he later attended the U.S. Naval Academy, but was given an honorable discharge after having “overstrained himself in athletics” (Kunitz 18).  He graduated from the University of Pittsburgh in 1915, then joined the Pennsylvania National Guard.  He served as a lieutenant in the infantry in World War One and was severely wounded.

After returning to the U.S., Allen settled down in South Carolina and began his career as a teacher and a writer, teaching English at Charleston High School and founding the Poetry Society of South Carolina.  He later lectured at Columbia and then Vassar where he met Ann Hyde Andrews, whom he married in 1927.

So what's this book about?
Anthony Adverse was published in 1933, and was to be Hervey Allen’s best-known and most successful work.  Nearly penniless by the time he finished the novel, the royalties alone allowed him to buy a manor in Maryland.

Anthony Adverse tells the life-story of the eponymous Anthony.  And when I say life story, I mean it covers his entire life in near-exhaustive detail, from the circumstances surrounding his conception in 1770’s Europe, to his death in Mexico at what I would guess to be the 1820’s or later.

This is an adventure novel, following the orphan Anthony, the son of a noble Scottish woman and her lover, abandoned at a convent by his mother’s husband, the evil Marquis Don Luis.  Coincidence finds him the ward of his maternal grandfather, a wealthy merchant in Livorno, Italy.  From there, his adventures include everything from African expeditions to owning a Southern plantation, to doing battle with Native Americans.

Two things about this book immediately jumped to my attention.  The first was the style.  It’s written in a style that seems to fit in more with the Romantics.  For example:

There could be no holding back now.  Had he not followed her all the way from Paris?
After the crushing of all hope by her marriage, after a year of foreboding and life in death,
to find this full cup of life held out to her, waiting as it were just around the next turn in the
road, intoxicated her, thrilled her through every fibre and flamed up with a sudden blaze
and hope of fulfilment in the very core of her being. (Allen 47)

The second thing that struck me was the length.  I’m reading a first edition copy which totals 1224 pages.  Part of the length is due to the at times excessive attention to detail, in regards to dress and architecture and landscape.  Then again, if I were to have read this for a different purpose, I would have been able to take much more time with it.

Why was it so popular?
While I feel the detail may be excessive, it certainly paints a good picture of the fashions and styles of the time.  Not only did this offer escapism (an orphan with a wealthy benefactor who goes on great adventures) but it has the added attraction of history.  Historical novels have been popular in American literary history (e.g. 1926’s The Private Life of Helen of Troy, 1928’s The Bridge of San Luis Rey, 1930’s Cimarron, 1931-2’s The Good Earth, etc.).  Somewhat of a rags-to-riches, wish-fulfillment story, this historical adventure novel was the perfect type of escapism during the economic turmoil of the Great Depression.

Anthony Adverse had another thing going for it.  “Issued with great publicity just in time to catch the summer reader, Anthony Adverse provided him (or, more usually, her) with three books for the price of one…” (Hart 261).

Why haven't I heard of it?
It seems to me that unless a book is a classic or contemporary, most people aren’t interested in spending the time necessary to read twelve-hundred pages.  Anthony Adverse was also, to some degree, a harbinger of its own doom.  While historical fiction had always been popular, Anthony Adverse ushered in a new fervor for the genre, resulting, most notably, in the popularity of Margaret Mitchell’s Gone with the Wind.

Perhaps the current obscurity of Anthony Adverse and the continuing popularity of Gone with the Wind are due to their respective movies.  A film version of Anthony Adverse was released in 1936 starring Freddie March and Olivia De Havilland. 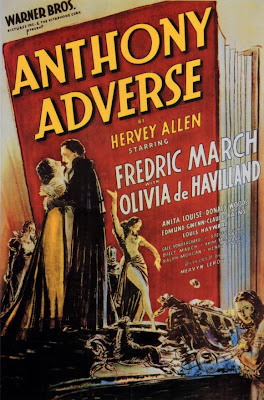 Should I read it?
If you’re looking for a long book with a lot of adventure and don’t mind the anachronistic prose, you’d like Anthony Adverse, but you’d probably be better off with Dumas.