Thoughts on the Slaughterhouse-Five Film Adaptation

Kurt Vonnegut’s Slaughterhouse-Five is one of my favorite books.  A testament to the futility of man’s will in the midst of war, of the lack of volition and agency that envelops mankind when put in an incomprehensible situation, all told in a voice that yoyos between heartbreakingly sincere and sarcastically hilarious.  Published in 1969, Slaughterhouse-Five is a modern classic, ranked 18th on Modern Library’s list of the 100 best twentieth century novels.  In 1972, the world received a film adaptation directed by George Roy Hill (The Sting, Butch Cassidy and the Sundance Kid) and starring the then unknown (and now obscure) Michael Sacks as Billy Pilgrim. 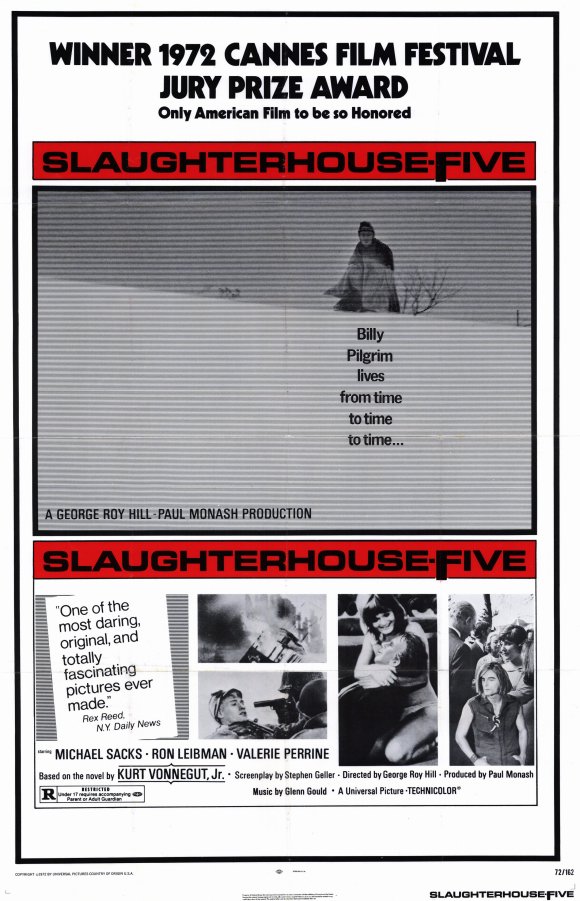 The first thing that popped into my mind upon hearing of the adaptation is, “How do you film this book?”  The second question is, “Should it even be attempted?”  There have, of course, been films that are as good as, or better than, their literary source material (e.g. The Wizard of Oz, Jaws, The Godfather, The Shining, The Shawshank Redemption, Forrest Gump, etc.), but very rarely are the books these are based on masterpieces (notable exceptions being Apocalypse Now, based on Joseph Conrad’s Heart of Darkness and A Clockwork Orange, based on the novel of the same name by Anthony Burgess).

The fact is, Slaughterhouse-five was a good movie.  I wouldn’t say it’s a masterpiece, but then again, most films aren’t.  The basic story and premise is the same as in the book, though the famous first chapter is, understandably, dropped.  The Tralfamadorians don’t appear onscreen, because they are only visible in the fourth dimension (an explanation coherent with the book’s take on the Tralfamdorians).  There were many such little changes that really didn’t affect the quality one way or another (e.g., instead of being lost with two scouts and Roland Weary, he’s lost with Weary and Paul Lazzaro).  There were two places where the movie improved on the book.


One thing the film improved on was Billy’s relationship with poor old Edgar Derby.  I’d say their friendship is better realized in the film than the book.  The second is Billy’s obsession with Montana Wildhack.  In the book, we learn that Billy found a blue film with her in it, but that’s seemingly the limit of his non-Tralfamadorian relationship to her.  In the film version, it’s a little closer to obsession and just tinged with creepiness.

I rarely ever find major fault with a small change in a movie adaptation.  The only cases where I do is when it completely recontextualizes or leads to a limited reinterpretation of much of the story and/or its characters.  In the case of Slaughterhouse-five, this change comes when the plane carrying Billy, his father-in-law, and a bunch of other optometrists is about to take off.  In the film version, Billy tries to stop the plane from leaving by warning everyone that it’s going to crash.  They don’t listen to him, and it does.

While the events in the rest of the story may not be altered, the interpretation of them must be.  Because Billy Pilgrim tried to use his knowledge of the future, we know something that is true in the film but (in my opinion) not true in the book: Billy Pilgrim has come unstuck in time.

Billy Pilgrim has gone to sleep a widower and awakened on his wedding day.  He has
walked through a door in 1955 and come out another one in 1941.  He has gone back
through that door to find himself in 1963.  He has seen his birth and death many times, he
says, and pays random visits to all the events in between.
He says.

If an author devotes an entire paragraph on the first page of the story to just two words, you better believe those two words are important.  The fact is, the narrator after chapter one is not the same narrator.  This is an alternate Vonnegut (Alternegutt?) who served with the fictional Billy Pilgrim and is simply telling us what Pilgrim has been claiming.  This is not third person omniscient, nor even first person omniscient.  This is first person limited.

It’s worth noting that Billy didn’t start talking about the Tralfamadorians until after the plane crash that resulted in his coma.

Every time something science-fictiony happens, the narrator describes it in terms of how similar it is to a Kilgore Trout novel.  While Billy was recuperating from a nervous breakdown, he became a fan of Kilgore Trout.  So, what you have is a man who has been through hell, had seen his only friend in the war executed, and later had a nervous breakdown, during the recovery from the lattermost of these misfortunes, becomes a fan of a science-fiction writer and starts to go through events similar to the man’s novels.

My point is that there’s ample evidence to support a PTSD interpretation, as opposed to a time traveling.  In the film version, we have to accept the time traveling, because Billy proved that he did have future knowledge and was therefore not just having a flashback.

But overall, I enjoyed the movie.  It had its flaws, but so does everything else. It seemed that the filmmaker had a lot of respect for the source material, without letting himself be shackled by it, which is great.  If you like the book, I’d recommend the film.