1949: The Egyptian by Mika Waltari 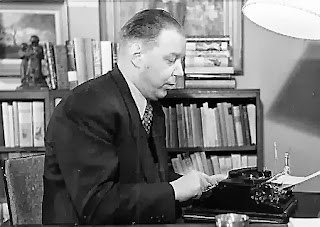 Mika Waltari (1908-1979) was born in Helsinki, Finland, the son of a secondary school teacher.  He first novel (jumalaa paossa) was published in 1925, a year before he graduated high school.  He became successful as a writer within Finland in 1928, mainly writing about the cultural and social changes going on at the time.

He married in 1931 and later served as a propagandist against the Axis in World War II.  In 1945, Waltari published the first of his historical novels, Sinuhe, Egyptiläinen, which was released in English in 1949 as The Egyptian (or, in England, as Sinuhe the Egyptian), translated by Naomi Walford.  (While I haven't been able to verify this, it seems that Walford may have translated the Swedish translation to English.)

The international success of The Egyptian made Waltari the world's preeminent Finnish writer.  In 2008, a commemorative €10 coin was issued in honor of the centennial of Waltari's birth, with his signature on one side and an Egyptian Pharaoh's watchdog on the other. 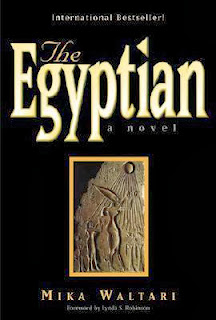 This is a book written in Finland, translated to English, which became a bestseller in America, and is about an Egyptian who travels to Babylon, Syria, etc.  If that isn't representative enough of the new global outlook post-WWII, I don't know what is.

But anyhow, The Egyptian is a first person narrative taking the form of a memoir by the exiled royal physician, Sinuhe.  After describing his exile, the narrator then tells us his life story, starting with his being discovered by a poor doctor and his wife in Thebes.  Like Moses, Sinuhe was abandoned in a basket and sent down the river.  (This is not the only reference to the story of Moses.  Sinuhe's friend, Horemheb, sees a burning bush in the mountains while on his way to war.)  The first quarter of the novel focuses on Sinuhe's education as a physician.  It details his disillusionment with the priesthood (through which he has to receive his training as a physician) and demonstrates the hypocrisy and decadence of the an empire at the height of its power.

Above all else, The Egyptian paints a fascinating panorama of the Sinuhe's world.  At times beautiful, bizarre, or atrocious, the customs and actions of the different nations and peoples (however accurately or otherwise) are powerfully drawn.  However, the prose is odd.  Whether this is due to Waltari or the translator, I can't say, but the writing is very rigid.  For example:

"I have evil swellings on my feet," he said, and he mixed Syrian
words with his speech.  "Your intelligent slave Kaptah recom-
mended your skill in treating such swellings.  Relieve me from
my torment and you shall not regret it."

So stubborn was he that at length I led him into my room and
called to Kaptah for hot water to wash my hands.  There was
no reply, but not until I examined the feet of the Syrian, did I
recognize Kaptah's own gnarled and spavined joints. My slave
plucked off his wig and burst into roars of laughter. (85)

This quote leads to two things in the novel that I want to talk about.  The first is the character Kaptah, who is the comic relief in the story.  He's clownish, shrewd, gets into misadventures, is crafty but extremely loyal.  Sometimes, though, his antics seem out of place, and although slavery in The Egyptian is not tied to a specific race, Kaptah's antics basically scream minstrelsy.  Which leads to the second point I want to make.
What do you do with a historical novel when the society, including the protagonist, have a value system.  that is not only different, but in many ways incompatible with our values?  Where things that we would consider at the very least unethical, and at worst evil, are not only acceptable but encouraged?  Waltari uses some of these (e.g. war and plundering) to criticize their nature.  So, for example, Horemheb is seen within the novel as a great and successful warrior, but his accomplishments are presented in such a way that we see them for how horrific they really are.  But all this leads to a bit of a problem when it comes to identifying with the protagonist, as we end up condemning a lot of his actions, even as we praise others.
While this may make personal attachment to the protagonist more difficult, it serves to better draw a picture of the protagonist's world, which it does well enough to have made The Egyptian into possibly the best known piece of Finnish literature, period.   If Wikipedia is to be believed (and some cursory research has turned up no evidence to the contrary) The Egyptian is the only Finnish novel to be adapted to a Hollywood film. 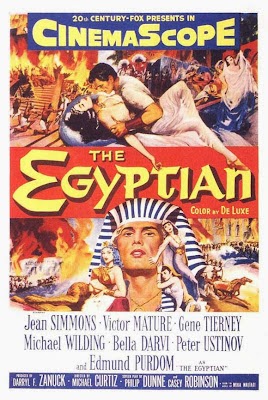