1950: The Cardinal by Henry Morton Robinson 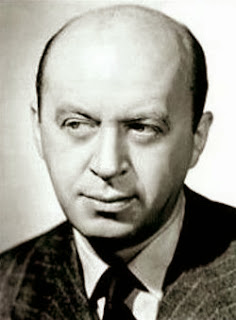 Henry Morton Robinson (1898-1961) was born in Boston, the oldest of eleven children.  Upon graduating high school, Robinson served in the U.S. military for two years.  He then attended Columbia University and began publishing poetry, his first book, Children of Morningside, being published in 1924.  That same year, he received his M.A. and went on to teach at Columbia.

He produced volumes of poetry, novels, and non-fiction works in the following decades.  In 1944, Robinson and Joseph Campbell released "The Skeleton Key to Finnegan's Wake."  The Cardinal, published in 1950, was Robinson's most successful work. 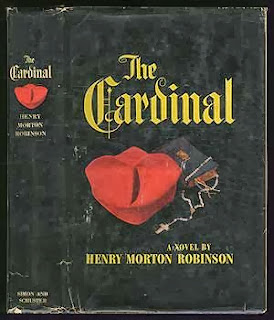 The Cardinal follows the story of Father Stephen Fermoyle, a priest from a working class Boston family, from his first assignment through his rise to the position of Cardinal.

I've read several books about priests or religious professionals so far on this list, and while Robinson's prose may be the nicest, I'm not that fond of the story for a few reasons.  I'm going to compare this to a couple other novels I reviewed, 1913's The Inside of the Cup and 1941's The Keys of the Kingdom.  The Inside of the Cup deals with its protagonist coming to reexamine and reinterpret his faith.  While Father Fermoyle has challenges thrown at him, there's (at most) a little uneasiness on his part, but he learns a valuable lesson and moves on.  Generally speaking, Stephen Fermoyle is a good guy who cares about everybody and wants to make the world a better place.  The same is true of the protagonist in The Keys of the Kingdom, but the protagonist of that novel is not always able to overcome the obstacles set before him and, because of this extreme honesty and kindness, does not climb higher in the church.  The big problem I have with The Cardinal is that Father Fermoyle doesn't really face much resistance. Things just work out because he's a nice guy.

Of course, that may be the point.  When doing research on the novel, I usually saw it referred to as "inspiring."  Assuming this isn't just a case of the phrase 'inspirational literature' being synonymous with 'religious literature,' it's easy to see why people liked it. It's a story about a good man who, through being good and honest, succeeds.  It's an affirmation of the values we are told to cherish.  More than a few of the reviews I read included people saying that it made them want to be a priest when they were kids.

There is a sense of nostalgia running through The Cardinal, and not just because it's set in the first half of the 20th century.  It's clear that Robinson had a love for the church and this shows in his writing.

While I've not been able to confirm it, the claims that Stephen Fermoyle is at least partly based on the cardinal Francis Spellman seem reasonable.  At the risk of going on a weird little tangent, there's a pretty vicious letter that Hemingway wrote to Spellman after Spellman had a bunch of seminarians break a gravediggers strike in 1949.

In every picture that I see of you there is more mealy mouthed arrogance, fatness and over-confidence.


As a strike breaker against catholic workers, as an attacker of Mrs. Roosevelt, I feel strongly that you are over-extending yourself.  It is very bad for a Prince of the Church to become over-confident.

I know that you lied about the Spanish Republic and I know why you lied.  I know who you take your orders from and why such orders are given.  You are heading a minority group in the United States, to which I was a dues-paying member, but you are heading it with arrogance, insolence, and the fatness of a Prince of the Church.

The word in Europe is that you will be the next, and first, American Pope.  But please disabuse yourself on this and do not keep pressing so hard.  You will never be Pope as long as I am alive.


Being a religious novel, The Cardinal does take up some controversial topics, most notably abortion.  Specifically, abortion when giving birth would definitely kill the mother.  Putting aside the rest of the debate on abortion, and just focusing on this specific circumstance, it's clear how it would be a morally contentious point with no easy answer.  Unless, of course, you're Stephen Fermoyle, in which case the answer is unquestionably to let the mother die.  This view plays a major part in an important plot point.  I don't mean to get hung up about it, but the issue is not handled well in the novel at all.

That bit of unpleasantness aside, the book kept selling, and was the #4 best seller in 1951.  A film version was released in 1963, starring Tom Tryon (I've never heard of him, either). 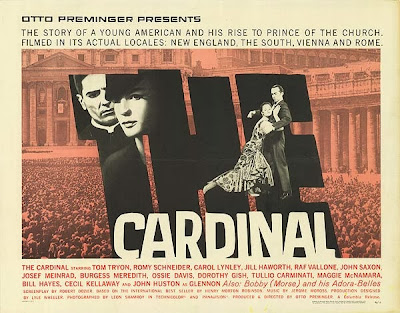 The Cardinal is well-written, and if you're looking for a religious, inspirational story, then this should work for you.