1985: The Mammoth Hunters by Jean Auel 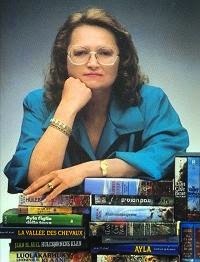 Jean Auel (1936-    ) was born Jean Untinen and was born in Chicago.  In 1954, she married Ray Auel (pronounced 'owl'), with whom she had five children.  She attended the Portland State University (Oregon), and in 1976 received her M.B.A. from the University of Portland.  From the sixties through the seventies, she worked as a clerk in a tech company and later as a technical writer, before publishing her first novel, The Clan of the Cave Bear (1980), the first book of the six part Earth's Children series and a commercial success.  The second book of the series, The Valley of Horses (1982) sold well, ending up sixth on that year's annual bestseller list, and the third and fourth books take the #1 spot in their respective years.  The fifth book in the series, The Shelters of Stone (2002), appeared seventh on the annual bestseller list, and the series was finished in 2011 with the publication of The Land of Painted Caves.

The Mammoth Hunters is the third novel in the Earth's Children series, so you're dutifully warned of spoilers for the first two books.  The story takes place in prehistoric Europe, during the last ice age.  In the first book, Ayla, a young cro-magnon child, is orphaned and later adopted by a tribe of Neanderthals who refer to themselves as the clan.  Ayla deals with fundamental differences between herself and the Neanderthals.  The Neanderthals cannot communicate vocally and have access to racial memory, that is to say, the collective memory of the Neanderthal peoples.  Ayla is trained as a medicine woman but, due to the actions of a Neanderthal man who hates her, is exiled from the tribe.   In the second novel, Ayla sets up home in a cave, where she befriends and trains a cave lion cub and a horse.  Meanwhile, an eighteen year-old cro-magnon man, Jondalar, and his brother set out from their camp for a years-long journey.  The two men visit numerous societies.  Ayla's cave lion, when grown, leaves her and later ends up attacking Jondalar and his brother, injuring the former and killing the latter.  Ayla saves Jondalar and nurses him back to health, and for the first time is introduced to Cro-Magnon society. The two fall in love.

In The Mammoth Hunters, Ayla, Jondalar, and Ayla's horse and it's foal, start the trek back to Jondalar's tribe.  Jondalar has explained to Ayla that there is a prevalent belief among the cro-magnons that the Neanderthals are no more than animals, incapable of complex thought, ritual, etc.  Dealing with anti-Neanderthal sentiment is common occurrence throughout the novel.   The two come across a camp of the Mamutoi, a jovial tribe of hunters.  Over the course of the novel, Ayla learns about Cro-Magnon society, continues to develop animal domestication and tools, and has her relationship with Jondalar put to the test.  This book largely focuses on Ayla's growing independence and understanding.

That said, there are a couple things that really bother me, the first is the Forrest Gump approach to history, where one unassuming individual is responsible for multiple major innovations.  Ayla develops animal domestication, the sling, the harness, the travois, among other technologies and techniques.  All this is made more problematic by certain incongruities.  Contrary to the beliefs of everyone she meets, Ayla believes that sex leads to childbirth.  Yet, when she refers to the heart as a 'thing that pumps blood,' everyone knows what she means, despite the fact that even the early Greek physicians didn't know that.  Auel's desire to explore and explain early societies often supercedes what would make sense for her characters to do.

The Mammoth Hunters seems to be equal parts domestic drama and infotainment.

I like to look at the goodreads reviews to get contradictory opinions and to see if any impressions I get are common among those who read the book, and why the book is so popular.  Among the most positive reviews, the historical backing is what gets mentioned the most, and the steamy love triangle comes second. A common criticism that I wholeheartedly concur with is that Auel repeats herself far too much.

In regards to the steamy love triangle mentioned in the above paragraph:  Auel's novels have been noted for their very frank and erotic sex scenes.  However, it comes across as something I'd expect to find in a harlequin romance novel as opposed to something like an Aimee Bender story. (And no, I'm not complaining that it's not written like a sex scene by Aimee Bender (or Toni Morrison, or Bret Easton Ellis, or Zora Neale Hurston, etc.), but rather trying to illustrate by comparison that a sex scene in a novel shouldn't suddenly change tone and be written in a gushy, wish-fulfillment, candlelight-and-mood-music kind of way.)

Unless you're a huge fan of historical fiction and are interested in prehistoric societies, you probably shouldn't take on the Earth's Children series.