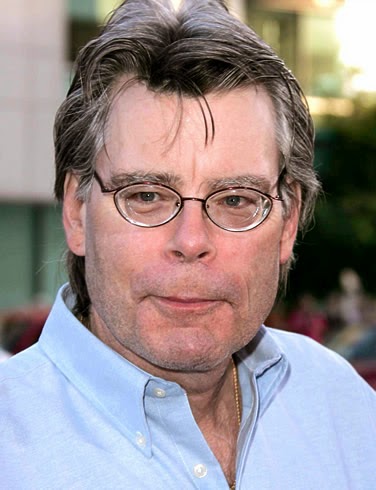 Stephen King (1947-    ) was born in Portland, Maine.   His father abandoned the family when King was two, leaving his mother to raise King and his older brother.  King attended the University of Maine, earning a B.A. in English in 1970.  King and Tabitha Spruce had their first child in 1970, and married in 1971.  Their second child, Joseph Hillstrom King, was born in 1972.  (He, like his mother and father, is a writer.  He writes under the name Joe Hill.)  King taught high school and supplemented his wages by selling short stories to magazines.
In 1973, he published his first novel, Carrie.  The first of his novels to make the annual top ten bestsellers list was The Dead Zone (1979).  Between 1980 and 2012, King appeared on the annual top ten list 34 times, in one case having three books on the same year's list. He has since written multiple non-fiction works, as well as serving as a columnist for entertainment weekly.  At current count, King has published twelve short story collections, two comic series, six books of non-fiction, fifty-six novels, seven novellas, ten screenplays, and a musical libretto.  But you might know him better for his bit part as 'hoagie man' in George Romero's motocross/sword-fighting classic, Knightriders.

It is easily one of King's most famous novels (along with others like The Shining, The Green Mile, The Stand, Misery, The Dead Zone, and Carrie).  It's probably the only one of the King novels I'm reviewing that an audience who had never read a King novel would know the plot of offhand.  But I'll summarize anyway.

The story takes place in the town of Derry, Maine, switching back and forth between 1958 and 1985.  Seven preteen misfits of the underdog-sports-movie variety, become friends.  Bill has a stutter, Ben is a fat nerd, Richie is a smart-ass with glasses, Eddie is a coddled hypochondriac, Beverly is a girl from the poor side of town, Mike is black, and Stan is Jewish, and they all live in a particularly violent town.   The novel starts when "Stuttering" Bill Denbrough's little brother is murdered, the first in a long chain of child murders/disappearances.  The 1958 discovery of the true nature of It, is split up with long sections from the friends in 1985.  They had made a pact that, should It, ever return, so would they, to kill It once and for all.

While It takes many shapes, the one it most frequently assumes is that of Pennywise the Dancing Clown.  As Beverly notes near the end of the novel: "[A] small child will sometimes laugh and cry at the same time when a capering circus clown approaches, knowing it is supposed to be funny... but it is also unknown, full of the unknown's eternal power." (ellipses part of the original quotation)  Like the clown, many of the forms It are either bizarre or come from the roster of classic horror movie monsters (e.g. werewolf, mummy, and at one point, Frankenstein's monster itself).  The effectiveness of this is largely dependent on your absorption in the novel.  If you're reading it as a horror novel, with the intent of enjoying the scares and identifying with the characters, it's effective.  If you're taking a step back, and analyzing everything, it's less so.

But for all of It's horrors, a lot of the story is not about It so much as it is about these characters coming-of-age in the 1958 frame, and coming to terms with traumatic pasts in the 1985 frame.  It is one of King's strongest novels, and the characters' growth is one of, if not the, largest factors in this.  After all, King did write The Body, which is better known for its film adaptation, Stand By Me. Which leads to its own issues.  Too often the childhood segments get drowned in sentimentality, and take on the feel of a heart-warming period piece.  Not that this is inherently bad, it just doesn't really work in the context of the rest of the book.  Likewise, with certain plot aspects (e.g. the value of belief as a weapon against It or the introduction of the turtle) that, although logically consistent with the story, sometimes come across as too goofy or bizarre in a silly way. But then, in a book as long as It, something like that's bound to happen occasionally.

One reason It is the best-known of the King books I'm reviewing is it's popular film adaptation.  The 1990 two-part made-for-tv movie with Tim Curry as Pennywise has remained popular (or at least has maintained a cult following) since its release. 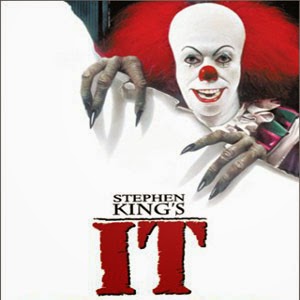 In a lot of ways, the book is darker than the film.   A lot of things that the film necessarily leaves off-screen (e.g. abuse, sex, etc) are explicit in the novel.  It's a solid horror novel.  It's also a good place to start for those looking to get into King's work, because it contains a number of tropes that appear often across his body of work (e.g., set in a mid-size town to mid-size city in Maine; child protagonists; a transcendent reality; a fascination with 1950's and earlier horror and sci-fi, etc).  That said, if you don't like horror novels, you won't like It.

1. It by Stephen King
2. Red Storm Rising by Tom Clancy
3. Whirlwind by James Clavell
4. The Bourne Supremacy by Robert Ludlum
5. Hollywood Husbands by Jackie Collins
6. Wanderlust by Danielle Steel
7. I'll Take Manhattan by Judith Krantz
8. The Last of the Breed by Louis L'Amour
9. The Prince of Tides by Pat Conroy
10. A Perfect Spy by John le Carré