From Page to Screen to Screen: Hemingway's "The Killers"


"The Killers" is a short story by Ernest Hemingway first published in 1927 and is part of his series of Nick Adams stories.  Two men in trenchcoats walk into a lunch counter in Summit, Illinois, cynical, condescending men who talk circles around the owner.  They make Nick, who's eating at the counter, go into the kitchen, where he and the cook are tied up while the owner turns away any customers that come in.  They say they're there to kill a Swede named Ole Anderson.  It's nothing personal, mind you. There killing him for a friend.  When it becomes clear that Anderson isn't going to show, the killers leave.  George unties Nick who runs off to warn Anderson.  Anderson, a former boxer, clearly knows that the killers are on their way, but refuses to do anything about it.  Nick returns to the cafe and declares his determination to get out of this town.

Like the other Nick Adams stories, the theme of disillusionment is major.  There's the cowardice of the cook and owner, the former advising Nick to not get involved at all.  The final lines of the story:

[Nick Adams says]"I can't stand to think about him waiting in the room and knowing he's going to get it.  It's too damned awful."
"Well," said George, "you better not think about it."

The story also relies on Hemingway's iceberg theory.  It's mentioned late in the story that Anderson "must have got mixed up in something in Chicago."  In the 1920s, the mob was a big deal in Chicago.  When law enforcement started cracking down, many relocated to Summit.

Overall, this is an excellent piece of minimalist literature. 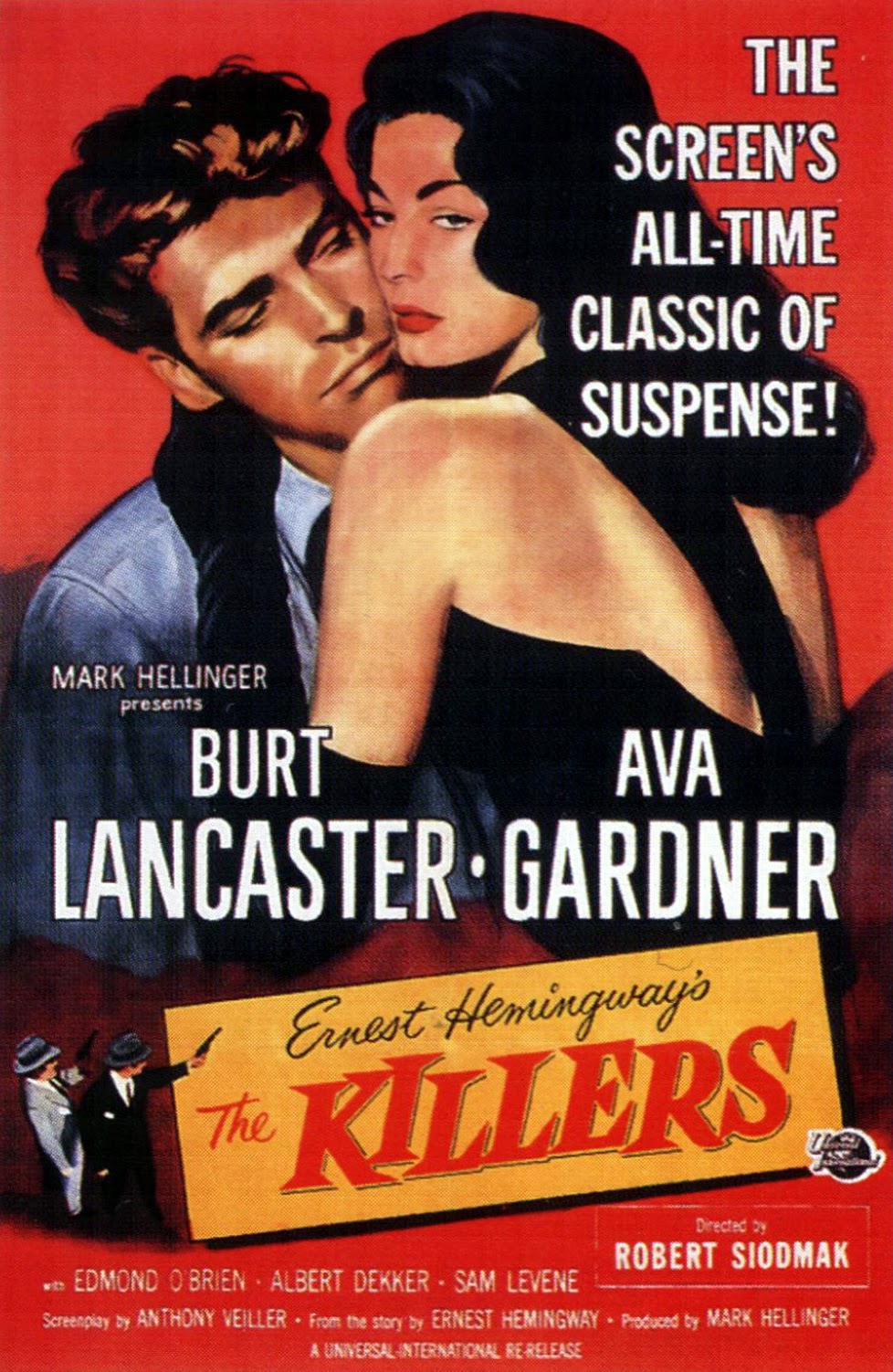 Director: Robert Siodmak
Runtime: 97 Minutes
The movie starts with a fantastic, nearly blow-for-blow adaptation of the original story.  The killers, played by noir character actors William Conrad (the fat man in "Jake and the Fat Man") and Charles McGraw, are sinister and distant in equal amounts.

Nick Adams (Phil Brown aka Uncle Owen from Star Wars) runs off to tell the Swede (Burt Lancaster in his first film role) that two men are out to kill him, but the Swede is resigned to his fate.

Enter Jim Reardon, played by Edmond O'Brien (The Wild Bunch, Oscar win for The Barefoot Contessa), an insurance investigator.  Nick Adams and the Swede were both employed by the same service station, which gives its employees a small life insurance policy.  While Reardon is going through the Swede's belongings, he finds a green handkerchief with a gold harp embroidered on it. This reminds him of something, but he can't quite put his finger on it.  At the morgue, he sees that the Swede's right hand is busted up, so he figures the guy must have been a boxer.  Thus begins his investigation.

He discovers that the Swede's name was Ole Anderson, a boxer who turned to a life of crime.  The detective who arrested Anderson was once his good friend, and agrees to help Reardon figure out what happened.  Anderson fell in love with femme fatale Kitty Collins, played perfectly by Ava Gardner (Showboat, On the Beach) and took the fall for her when she was caught with stolen jewelry.  When he got out, he found that she'd gone back to her ex, crime lord Big Jim Colfax (Albert Dekker).  Along with two other established crooks, Colfax and Collins invite Anderson in on the score of a lifetime: A $250,000 daylight robbery. (That's over $3 million adjusting for inflation.)

For reasons that will become clear later, I have to give away the rest of the plot.  If you'd rather watch the movie before finding out the ending (which I highly recommend), stop reading now, watch the movie, and come back.

Reardon recognizes the handkerchief as the mask worn by one of the robbers at the Prentice Hat Robbery.  It turns out that Anderson, believing that the others were going to double-cross him, stole the entire score and, unbeknownst to the rest of the gang, ran off with Kitty, who then ran off with the money.  Reardon has a violent altercation with one of the other criminals, Dum-Dum Dugan (noir character actor Jim Lambert) who is trying to find where the money is and gets Reardon to admit Kitty ran off with it.

Reardon gets in contact with Jim Colfax, who's gone legitimate, and tells him what's happened.  He soon gets in contact with Kitty, who sets him up to be killed, but Reardon manages to get a drop on the killers (who we haven't seen since the opening) and escape.  Reardon goes to Colfax's house where Dugan and Colfax have just shot each other, and we get the final twist:  Kitty was working with Colfax the entire time.  She convinced Anderson to take all the money, so she and Colfax could have it without giving out shares.

This is a fantastic noir film, with a great plot, solid pacing, and fantastic acting.  It was nominated for four academy awards, including directing and screenplay, but lost out to The Best Years of Our Lives on both. 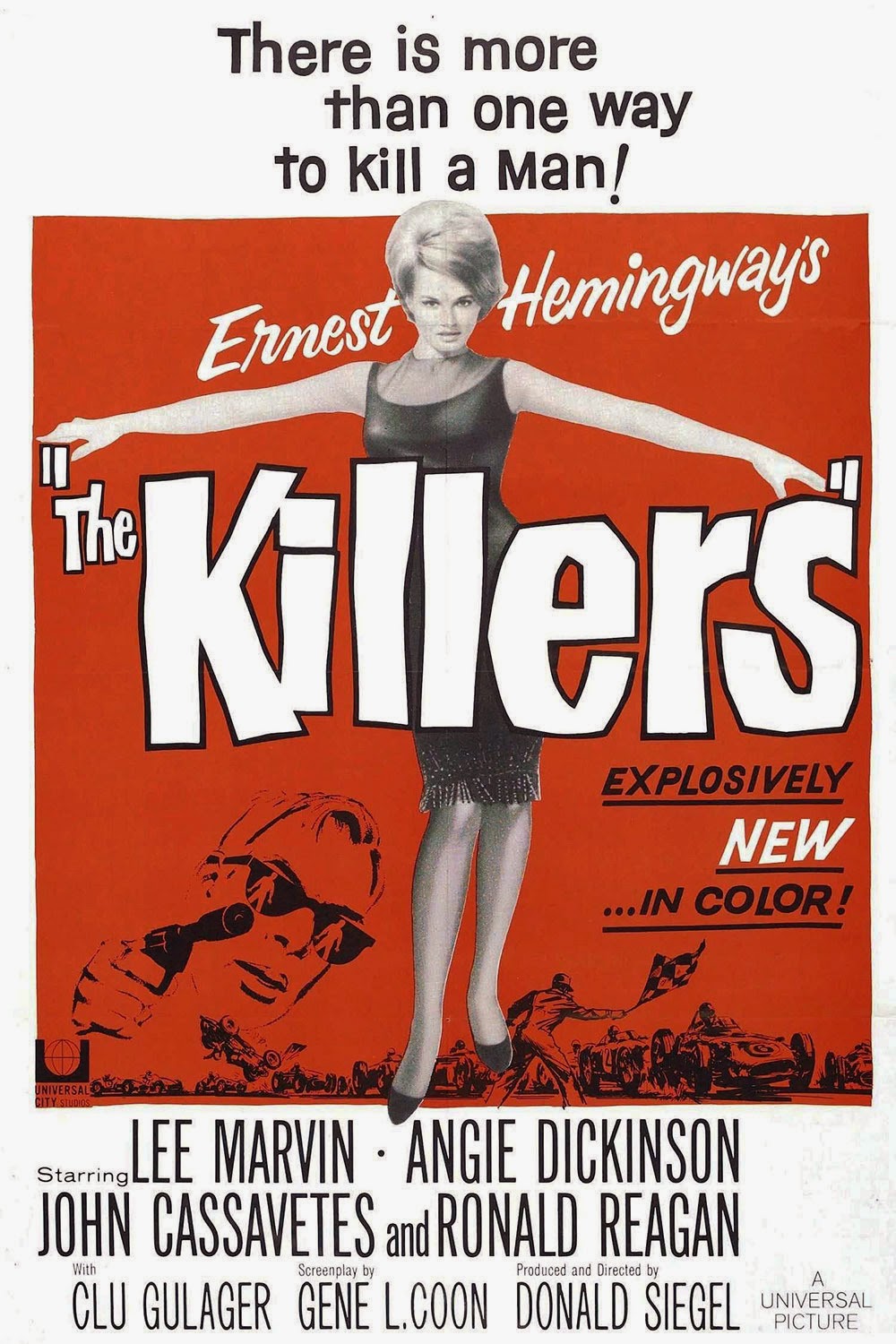 We start with two mysterious men walking into a school for the blind, looking for a man named Jimmy North.  Someone gets word to North that two guys are after him and they mean to kill him, but North refuses to run.  The two men find North, who offers no resistance when they shoot him.  Or rather, they shake their guns at him, because apparently silencers mean there's no muzzle flash, shells, or any other thing one normally associates with a gun going bang.

We next see the men on a train out of town.  Lee Marvin (The Dirty Dozen) plays Charlie Strom, a grizzled veteran hitman with great screen presence, while Western character actor Clu Galager plays his partner, Lee, a living cartoon character.

Strom realizes three things.  1. He was paid $25,000 for this hit, when he'd never been paid more than $10,000 2. Jimmy North had been involved in a million dollar robbery and ran off with the money.  3. If North had the money, they would have been asked to lean on him, not kill him.  Therefore, whoever hired him has the money.  And maybe they just oughta get that money for themselves.

It turns out that Jimmy North (Oscar nominated actor/writer/director John Cassavetes) used to be a racecar driver, so they go to his old mechanic for information.  Fourteen minutes into the movie, we get our first flashback.  The flashback lasts thirty goddamn minutes, and about half of that is driving footage with terrible greenscreen.

Jimmy North falls for Sheila Farr (Angie Dickinson).  His mechanic keeps claiming that Farr is bad for him, and she'll ruin his focus.  Well, North has a blowout and crashes, leading to a period of hospitalization.  He finds out that Farr is a kept woman, her benefactor being crime big shot Jack Browning (Ronald Reagan).  Now, at the 45 minute mark, we cut back to Strom and Lee, who we haven't seen for two-thirds of the screentime so far.  They find Mickey Farmer (Norman Fell), Browning's right hand man, who tells them what happened next.  This flashback takes another twenty. goddamned. minutes.  Basically, North is washed up, Farr gets him involved as a driver on a big score that Browning is organizing, and North double-crosses the group and makes off with the money.  Now, over an hour and ten minutes into an hour and a half movie, we finally see Strom and Lee again.  They confront Browning, and demand to see Farr.  They go to Farr's apartment, threaten her, and she has a flashback (a mercifully brief five minute one this time) about how she convinced North that the gang was going to double cross him, and how she and Browning took the money and shot him.  The killers leave the apartment building and are shot at. Lee is killed and Strom is hit.  Strom makes his way to Browning's house, where he shoots Farr and Browning before bleeding out.

There's only one good thing about this movie and his name is Lee Marvin. 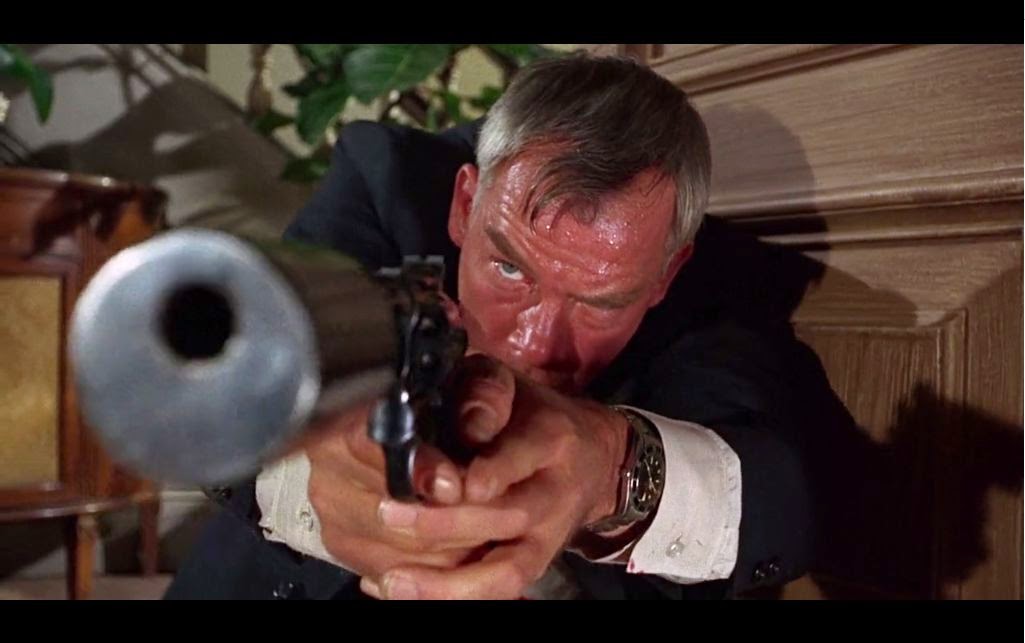 Unfortunately, he gets practically no screen time.

In addition to a spot on direct adaptation of the story, Burt Lancaster is a solid Hemingway protagonist, the honorable tough man with big feelings.  While in the 1964 version, the sum total of the similarity is two hitmen kill a guy who doesn't resist.

It's strange that the movie from the '40s has aged wonderfully while the movie from the '60s is so outdated.  The 1946 version is fantastic.  Pacing, acting, plot, aesthetics.  It's a great film.  The 1964 version?  It's plagued by terrible decisions.  Besides the aforementioned flashbacks and boring driving sequences, perhaps the most unforgivable is Angie Dickinson's character.  In the 1946 version, Ava Gardner is tough, she steals every scene she's in, and you never know where her loyalties lie, or if she even has any.  In both versions, there's a scene when the robbery is being planned.  The femme fatale and the future murder victim flirt, much to the chagrin of the fatale's current beau.  In the 1946 version, Big Jim Colfax threatens to slap Gardner.  Lancaster makes a move but Gardner tells him she can take care of herself.

Angie Dickinson spends half of her screentime flirting with the male characters, and the other half getting beaten up.  All this does is make her a far less compelling character.  In fact, every character in this version is worse than the 1946 one.

It's a Hemingway double-header!

We'll look at the 1937 novel To Have and Have Not, and it's three film adaptations:

The Bogart/Bacall vehicle To Have and Have Not (1944)

And the Audie Murphy action flick The Gun Runners (1958)