From Page to Screen to Screen: Hemingway's "To Have and Have Not" 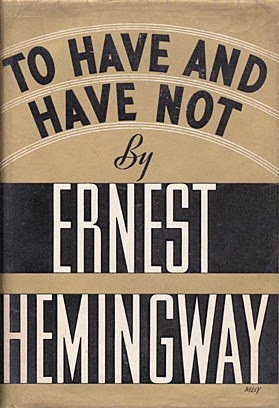 To Have and Have Not was Hemingway's third novel, released in 1937, between two of his major works (A Farewell to Arms and For Whom the Bell Tolls).   It's main character is Harry Morgan, a captain of a small boat in the Florida Keys and Cuba who makes a living chartering the wealthy for fishing trips.  Short on cash after being stiffed his payment by a client, Morgan agrees to smuggle some Chinese immigrants from Cuba to the US.  He tries to prevent Eddie, a rummy and his first mate, from going with him, but he sneaks on to the ship anyway.  Thinking he'll be double-crossed after loading the immigrants on his boat, Morgan kills the man who hired him and then leaves the Chinese on the shores in Cuba.

Times being tough, Morgan takes to running rum from Cuba to the US, and on one trip he and another mate, Wesley, are shot by the Cuban patrol.  Harry loses his arm and his boat is confiscated.  The novels shifts at this point, Harry's relationship with his wife is delved into, his troubled relations with the wealthy inhabitants of the Florida keys, a few of whom temporarily become main the focus of the book.  Hemingway swaps narrators and focuses on the Haves instead of the Have Nots for quite a while, before going back to Harry Morgan, who's agreed to steal back his boat and run some Cuban bank robbers back to Havana, but things don't go as planned.  The robbers kill Morgan's friend Albert and in the ensuing drama, a shootout leaves all the boat's occupants dead, including Morgan.

This is one of Hemingway's more marginal novels, along the lines of Across the River and into the Trees, and is in fact better known for the first of it's film adaptations.  The novels changing narrators and roving focus is a questionable choice, and has garnered divisive reviews. 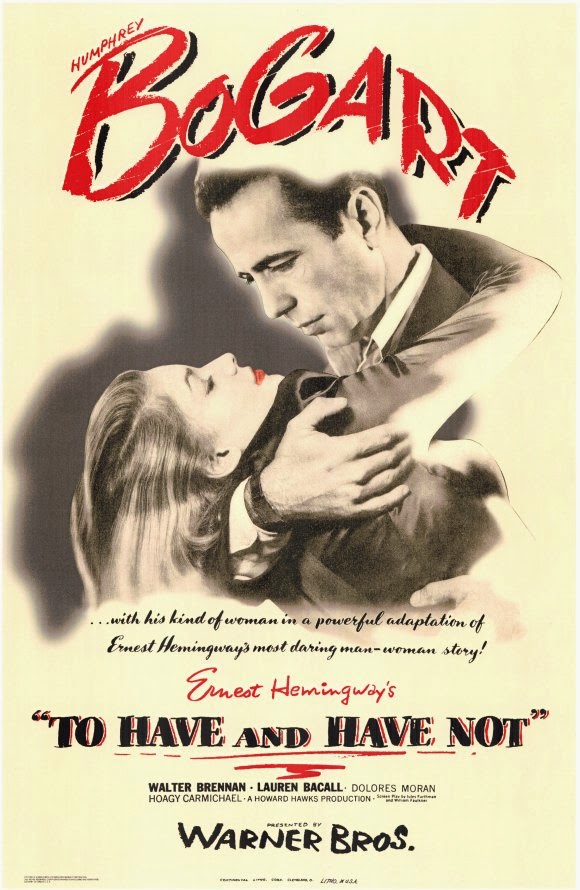 To Have and Have Not is a classic of the Hollywood golden age.  Humphrey Bogart plays Harry Morgan, a captain of a charter ship in Martinique, a French colony in the Caribbean now under Nazi rule.  Morgan is no fan of the Nazis, but he remains staunchly apolitical.  Morgan and Eddie, played here as pure comic relief by Walter Brennan, turn down a job smuggling French resistance fighters into Martinique.  At the hotel bar, Morgan notices a young woman pick-pocket his charter's wallet (said charter owed him a little under a thousand dollars, and claimed he'd need to cash a check the next morning).  Morgan confronts the girl, and discovers that the charter had nearly two grand in cash and traveler's checks, as well as a plane ticket out of Martinique for the next morning.  The woman introduces herself as Marie Browning (Lauren Bacall, in her first film role), and together they confront the charter.  But the revolutionaries are attacked in the hotel bar, and the charter catches a stray bullet.  Morgan is questioned by the Gestapo and has his money confiscated.  In need of cash, he agrees to help the French resistance fighters.  As the film goes on, his relationship with Browning and desire to help the resistance grows.  The film also has an affable bar singer/pianist.

If the plot sounds a bit like Casablanca, that's because it is.  Casablanca was a big hit, and the studios wanted to strike while the iron was hot.  What's especially interesting is that one of the screenwriters was William Faulkner, who was not Hemingway's biggest fan.  I can't imagine it caused him much heartache to cut a lot of the Hemingway from To Have and Have Not. 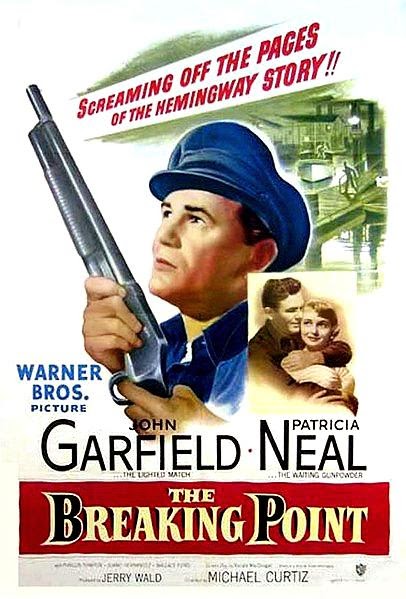 The Breaking Point stars John Garfield as Harry Morgan, a charter boat captain who ferries between Newport, California and Mexico.  His charter has them take him and a young, beautiful woman to Mexico.  The woman, Leona Charles (Patrice Neal), attempts to seduce Morgan, but is rebuffed.  After the charter strands Morgan, Leona, and Morgan's mate Wesley in Mexico, Morgan agrees to smuggle some Chinese immigrants aboard his ship.  When the man who hired him tries to double cross him, Morgan kills him and dumps his body in the ocean before releasing the immigrants on the Mexican coast.  When he gets back to California, he finds that one of the immigrants identified his boat, and it's being confiscated by the coast guard.

Morgan's relationship with his wife Lucy (Phyllis Thaxter) and their two daughters is a major part of the novel, and the relationship is fantastically complex.  Not melodramatic, mind you, but they clearly love each other very much but have their own issues and insecurities, and his continuing friendship with Leona Charles throws a small wrinkle into things.

Morgan finds out that the boat was released due to the efforts of the crooked lawyer that facilitated the deal with the Chinese.  The lawyer blackmails Morgan with the knowledge of the murder, and gets him to ferry some robbers to Mexico.  Morgan decides to double cross the robbers and turn them in for the reward.  Unfortunately, Wesley is on the boat when the robbers arrive, and they kill him.  Some time later, there's a shootout, on the boat, and Morgan is the only survivor, but he'll need his arm amputated. 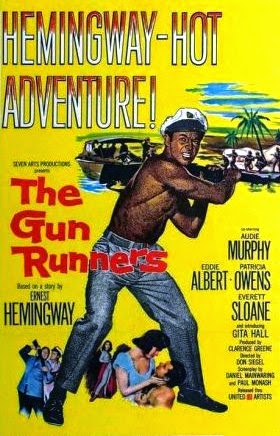 The Gun Runners stars Audie Murphy as Sam Martin, captain of a charter boat that runs between Cuba and the Florida keys.  He works with an alcoholic first mate named Harvey (Everett Sloane).  A combination of a crooked charter and a gambling problem land Martin in money troubles.  He takes on a man named Hanagan (Eddie Albert) and his beautiful girlfriend Eva (Gita Hall) to Havana for what Martin believes is an affair, but is really a meeting for an arms deal with the Cuban revolutionaries which ends up with Hanagan shooting a Cuban military officer.   When they get back to the keys, Martin tells his wife what happened.  Lucy Martin, played by Patricia Owens, is the perfect wife.  Beautiful, supportive, trusting, their relationship is completely without trouble, despite the obvious troubles in their lives.

Anyway, Hanagan buys the papers on Martin's boat, and forces Martin to smuggle the guns and a revolutionary into Cuba.  When the revolutionary realizes that most of the boxes of guns are empty, Hanagan kills him.  They discover that Harvey had been hiding on the ship, and he jumps overboard when Martin gets them close to a shoreline.  Martin takes a bullet, but kills all the bad guys (which is completely believable; Murphy received the medal of honor for single-handedly holding off an entire company of German infantry).  He picks up Harvey, and the two head home.

Murphy did a lot of Westerns and war movies, and the director is best known for crime/action movies, most notably Dirty Harry and Escape from Alcatraz (although those were after The Gun Runners.  Siegel directed the 1956 Invasion of the Body Snatchers as well as a bunch of crime thrillers with titles like Riot in Cell Block 11, Crime in the Streets, Private Hell 36).  The Gun Runners tries to keep some of this aesthetic, but it's hit or miss. 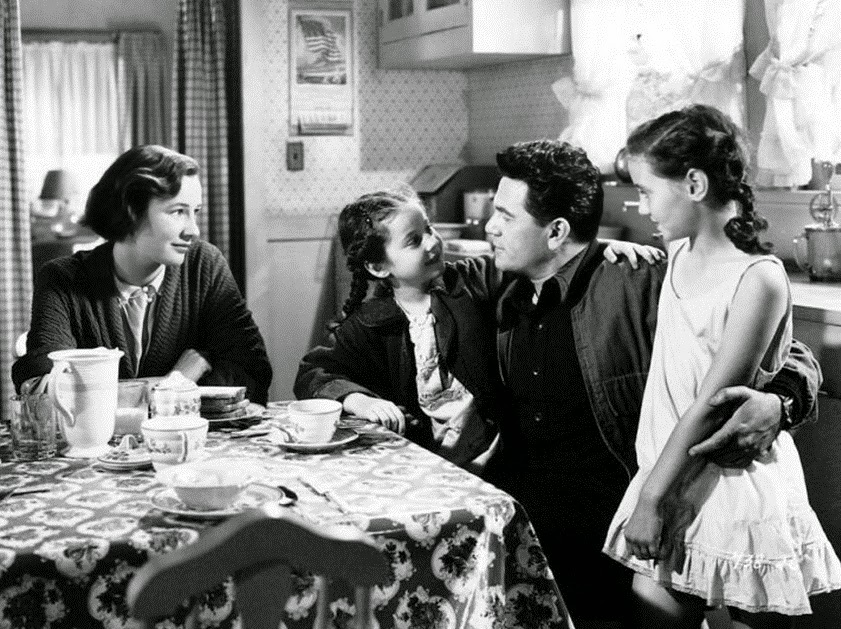 While none of the films go into the rich/poor issue as Hemingway does, The Breaking Point at least attempts to with Leona Charles, the beautiful socialite.  There is much more similarity with the plot of the novel in general, as Garfield is a bit darker than Murphy's Sam Martin, and less of a smooth talking maverick than Bogart's Morgan.  The relationship between Morgan and his wife is complex and sincere, whereas this relationship is absent in To Have and Have Not and drastically simplified in The Gun Runners.


I know, declaring a tie is a bit of a cop out.  But these movies are both fantastic and I honestly can't choose.  I've already discussed the relationship in The Breaking Point, but I haven't mentioned the incredible chemistry between Bogart and Bacall (who ended up getting married).  To Have and Have Not also has some great music, and fantastic acting.  While The Gun Runners is a solid film, it's not on the level of the other two.  Audie Murphy may have been one of the greatest soldiers of the twentieth century, but Bogart and Garfield are better actors.  These are two very different movies, the former lighter in tone with a strong romantic core, while the latter is darker and morally ambiguous.  Both films had excellent directors, and in an ironic twist, the film that wasn't trying to repeat Casablanca was directed by Michael Curtiz, who directed Casablanca in 1942.


Anyway, check back next week when I'll look at W. Somerset Maugham's The Razor's Edge (1944), and it's two adaptations.