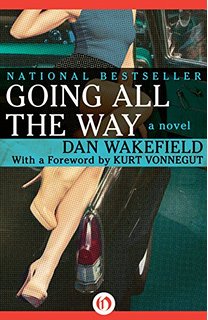 On the occasion of its re-release as an ebook, I was asked to review Dan Wakefield's debut novel Going All the Way.  One of the major themes, as the title suggests, is sex, but more specifically in the context of the social milieu of 1950's Indianapolis. In his foreword, Vonnegut compares it to the previous year's best selling novel, Portnoy's Complaint, claiming that though Wakefield's novel has "wider concerns and more intricate characters, the sexual problems are pretty much the same."
Going All the Way focuses on Willard "Sonny" Burns, who starts the novel on a train back to Indianapolis after spending his service in the Korean War in the public information office in Kansas City.  On the train home, he meets Gunner Casselman, one of the "big rods" at Sonny's high school in Indianapolis, returning home from the war a hero.  Their friendship develops from here, with Sonny, the insecure, out of shape loser who enlisted only to discover that serving in the Korean War was was like "being on a team in a sport that drew no crowds, except for the players' own parents and friends," and, perhaps more distressing from his point of view, that "Korea wasn't the kind of war that got you laid for being in it," now being taken under the wing one of the town's golden boys.  But Gunner has started to realize that this golden boy status is meaningless when the society he's in is so limited.
Vonnegut describes the book as "a period piece," which is only somewhat accurate.  There are certain plotlines that are very specific to a certain place and time, for example, the huge social stigma about growing a beard, and Sonny's mother shouting "My Sonny shaves, like a good American."  But other aspects remain, maybe not to the same pervasive extent of the midwest in the 1950s,  Sonny's mother, much to his chagrin, has become a member of the "Moral Re-Armament Movement," and is trying to get him back into the church.  This movement, as much interested in complaining about desegregation and social progress as it is in evangelism, can be seen later in Falwell's moral majority, or even today in any number of organizations, usually with the words "family" or "values" in their names.  Maybe the two most popular public figures in Indianapolis at this time are Jesus Christ and Senator Joseph McCarthy.  As Gunner laments "anything different is pinko. Anything you ask, if you really want to figure things out, that's pinko too."  It is in this repressive social setting that Gunner and Sonny try to have an active sex life, which makes for great comedy until the pressure gets overwhelming.
On another level, this book is about a period of aimlessness for people in their twenties, especially when self-discovery and independence are actively hindered, when "anything different is pinko."  This isn't a beat novel, though Wakefield had contact with the major beat authors.  Rather a novel of disillusionment, detailing the frustration of young men fighting against the hypocrisy and disappointments of their society, realizing that maybe they're wasting time waiting around for "the perfect combination of sex and intelligence that every man is supposed to find, that is his rightful due," It focuses on a period between the clearly marked path of childhood and high school and college, and the rest of adult life.  While there is a lot of humor in this book, there is a solid core of angst, which can range from earnest to, well, angsty.
All in all, I enjoyed Going All the Way.