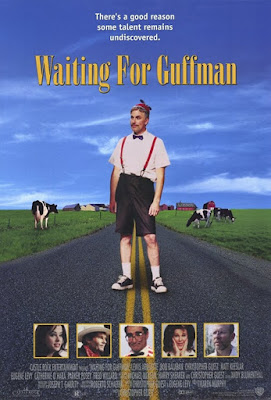 Waiting for Guffman is the second in a series of mockumentaries written and/or directed by Christopher Guest, starting with This Is Spinal Tap! (1984), followed by Waiting for Guffman (1996), Best in Show (2000), A Mighty Wind (2003), and For Your Consideration (2006).  Christopher Guest stars in this one as Corky St. Clair, a flamboyant former Broadway actor who had moved to the small town of Blaine, Missouri, and is tasked with writing/directing a new play for the town's sesquicentennial celebration.  The cast is comprised of local amateurs (and frequent Christopher Guest collaborators), Dr, Pearl, the dentist (Eugene Levy), Dairy Queen waitress Libby Mae Brown (Parker Posey), and husband and wife travel agents, Ron and Shiela Albertson (Fred Willard and Catherine O'Hara).  The style is semi-improvised, and usually played dead-pan in only the way people like Levy and Willard can play it.  We also get little glimpses of what life in Blaine is like, which is where we get our scene with David Cross, a UFO Expert. 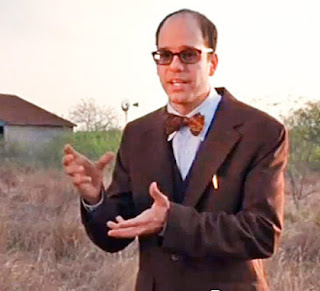 Among Blaine's major accomplishments is having been the first city to have a UFO sighting, and as Cross tells us, the landing site is interesting because it's a circle whose diameter and circumference change, but the radius always remains the same.

The eponymous Guffman is a broadway big shot who is going to attend the premiere of "Red, White & Blaine," and, if they're lucky, take the show to Broadway.  Of course, the play is hilarious (for all the wrong reasons), the actors are awful. Blaine itself, the Stool Capital of America, was founded by a group of a group of settlers heading for California, whose leader convinced them that a random spot in Missouri was right off the Pacific coast.  One hundred and fifty years later, many of the performers are still trying to get to California, and Hollywood in particular.  Perhaps it's this sense that nothing ever happens in Blaine that makes the title of the film so fitting.  The townspeople in Waiting for Guffman, have, in some ways, the same sense of pointless and endless waiting as the characters in Waiting for Godot.  And, as opposed to, say, This is Spinal Tap!, there is real heart here, and despite their wackiness, you can't help having a lot of sympathy for the characters. 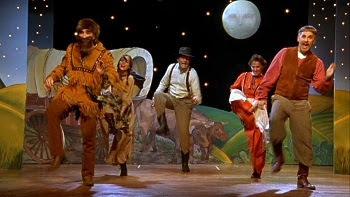 I'd recommend all of Guest's mockumentaries, and Waiting for Guffman is no exception.