1951: From Here To Eternity by James Jones 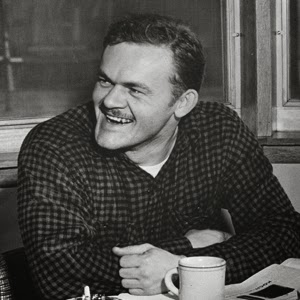 James Jones (1921-1977) was born in Robinson, Illinois. Although the discovery of oil on family property briefly brought the Joneses wealth, when Jones graduated High School in 1939, the money had run out.  With no money to pay for college, Jones joined the U.S. Army Air Corps.  His poor eyesight prevented him from becoming a pilot, so in 1940 he transferred to the infantry and was sent to Schofield Barracks in Honolulu. Over the following year, both of Jones’ parents died, and the Japanese attacked Pearl Harbor. In December 1942, Jones was sent out to fight in Guadalcanal.

Wounded physically and emotionally, Jones was shipped home in 1943. He decided to stay in the army on limited duty, but was sent to a combat outfit preparing to ship out for battle.  Jones went AWOL and headed back to Robinson.  Here, he met his mentor and future lover, Lowney Handy and her husband Harry.  Jones went AWOL several times over the following year, and was eventually given a medical discharge.  He then went to live at the Handy Writers’ Colony.

In 1951, he published From Here to Eternity, which focused on the military life in Hawaii.  In 1957 he married Gloria Patricia Mosolino.  They moved back to the Writers’ Colony, but left after a violent altercation between Lowney and Gloria. The Joneses moved to Paris. Although he published many novels over the decades following From Here to Eternity, the first to receive the critical and public reception that FHtE received was 1962’s The Thin Red Line, about his experiences in Guadalcanal.  This was the second book of his “War Trilogy.”  He returned to the U.S. to teach at the Florida International Institute in 1974.  He died of congestive heart failure in 1977.  The last book of his war trilogy, Whistle, was published posthumously in 1978.

From Here To Eternity follows the life of Robert E. Lee Prewitt, a soldier from a small southern town stationed in Hawaii before the U.S. entered World War II.  Prewitt had blinded another soldier during a boxing match before the events in the novel begin gave up boxing so as not to hurt any one else.  Upon transferring back to G company, known for its boxing, Prewitt’s refusal to fight puts him at odds with his superiors.  There are other major storylines, like Sgt. Warden’s affair with Cpt. Holmes’ wife, Karen.

The novel deals honestly and directly with morally ambiguous situations, and with topics like sex and honor.  Which is a bit of a relief and surprise, seeing as the previous bestseller was about a morally upright priest and the book after this is biblical historical fiction about a morally upright metallurgist.  Of course, this frankness, the sex scenes, the frequent cussing, would itself help sales for the novel.  Controversy is good for sales.

That’s not to say that the novel isn’t good.  It is, very much so.  In fact, From Here To Eternity is one of the six novels on the list to also appear on Modern Library’s List of 100 Best Novels (the other five: The Grapes of Wrath, The Bridge of San Luis Rey, Portnoy’s Complaint, Main Street, and Ragtime).  From Here To Eternity was a critical and commercial success.

Of course, the 1953 film adaptation starring Burt Lancaster and Deborah Kerr, is about as famous (and well-received) as the novel.  Even if you’ve never heard of the movie (several people I’ve spoken to recently haven’t), you’re definitely familiar with this famous scene: 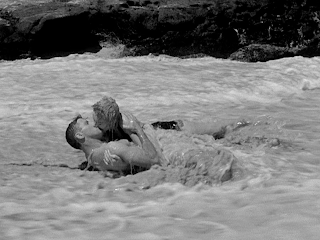 If you don’t recognize it here, you might recognize it from The Seven Year Itch, Airplane!, The Nutty Professor, or Shrek 2, as well as countless other films and TV shows that parodied this scene.

The novel’s a little slow in the beginning, and it’s not a war novel so much as it is an army novel. If you like books that deal with complex relationships, both romantic and professional, and with complex group dynamics, this is a must-read.