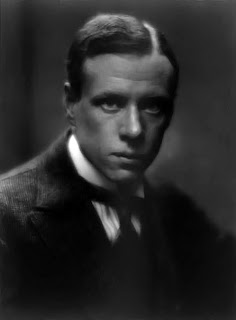 Who?
Harry Sinclair Lewis (1885-1951), better know as ‘Sinclair Lewis,’ was born in the village of Sauk Centre, Minnesota, which would later become the basis for Main Street.  In 1903, he began attending Yale University, taking time off in 1906 to join (as a janitor) Helicon Hall, a cooperative living community created and run by The Jungle novelist, Upton Sinclair.  He graduated from Yale in 1908, and lived briefly in New York and California before settling in Washington D.C.  He occasionally sold story plots to Jack London and in 1914 he married Grace Livingston Hegger.  In 1917, Sinclair and Grace had a son named Wells, who was killed in World War Two.  In 1925, Grace and Lewis divorced.  Lewis married Dorothy Thompson in 1928, and had another son, Michael.  The two divorced in 1942.

Between 1912 and 1920, Lewis wrote several novels, none of which were very successful.  Main Street, published in 1920, became his first huge success, followed by Babbit (1922), Arrowsmith (1925), and Elmer Gantry (1927).    In 1930, Lewis became the first American author to win the Nobel Prize in Literature.  In the following years, he wrote eleven more novels, none of which “equalled the success or stature of hischeifworks of the twenties.”  After his divorce from Thompson, Lewis lived mainly in Europe.  He had an ongoing problem with alcohol which was a major contributing factor in fatal heart attack.  He died in a clinic on the outskirts of Rome.

So what's this book about?
Main Street tells the story of Carol Milford, an intelligent and idealistic librarian from Saint Paul, Minnesota.  She falls in love with small-town doctor, Will Kennicott, and agrees to marry and moves with him to his small hometown of Gopher Prairie, Minnesota.  She plans to improve the town, but finds a town ensnared in pettiness, arrogance, and conceit.  The only people she can connect with are the poor immigrants, whom the elite of Gopher Prairie are dependent on and disdainful of.

This novel is a scathing satire of the American small town.  In Main Street, Lewis strips away the mythology of the kind and gentle Midwesterner and shows the crooked and self-involved power struggles within the town of Gopher Prairie and all those like it.  The protagonist tries to circumvent the web of jealousy and pride that makes up the town’s mentality, but finds this to be as much a part of the town as the dilapidated buildings.

The portrait Lewis paints of Gopher Prairie is exhaustive: in the sense of its completeness and in the sense of its frequently overwhelming, if not superfluous, detail.  Lewis’s prose leaves much to be desired.  Mark Schorer, in his painstakingly researched, tomeful biography Sinclair Lewis, an American Life, concludes that “He was one of the worst writers in modern American Literature, but without his writing one cannot imagine modern American literature” (813).    I wouldn’t go so far as to use the superlative “worst,” but compared to the other ‘greats’ of early 20th century American literature, Lewis is conspicuously lacking in style.

Why was it so popular?
As opposed to the other novels so far reviewed, Main Street is incredibly critical of not only American mentalities but specifically rural America.  Whereas the others either  praised the rustic (e.g., The Eyes of the World, Zane Grey’s novels) or found fault in industrialization (e.g. The Inside of the Cup, The Turmoil), Lewis spends over four hundred pages pointing out the hypocrisy of middle America.

There are, of course, contemporary issues raised in the course of the novel.  Woman’s suffrage and the role of women in society was dealt with frequently, as was the role of immigrants and labor unions.  Consider that this was published in 1920, the year the United States ratified the 19th amendment, guaranteeing the women’s right to vote.  This was also written and published at the height of the First Red Scare.  The federal government had been called out to violently end labor strikes.  Anti-immigrant and anti-anarchist sentiment was at a peak; the Immigration Act of 1918 gave the government the ability to deport any immigrants with anarchist connections or ideals.

To one extent or another, Main Street calls the American people out on all these issues.

So why haven't I heard of it?
It seems that some high schools do (or at least used to) have Main Street as compulsory reading.  Main Street is a slow book.  That isn’t to say the pacing drags, just that it requires a good amount of patience.  And, as I mentioned earlier, Lewis’s prose is not particularly elegant or forceful.  As a study of the small town mentality, currently as well as in the early 20th century, Main Street is fantastic, but that may not be enough to get people to take the time and effort to read it.

Should I read it?
Yes.  Despite my griping about the prose, the story is strong.  It presents a sometimes infuriating picture of small town politics and the social and economic challenges that grow from that, challenges that are still relevant today.

You can read Main Street on Project Gutenberg.

John Galsworthy - To Let (last part of the Forsyte Saga)