1939: The Grapes of Wrath by John Steinbeck 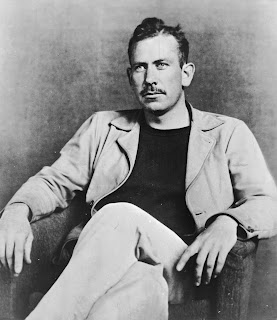 John Steinbeck, Jr. (1902-1968) was born in Salinas, California, a then-rural area in Northern California, to John Ernst Steinbeck Sr., Treasurer for Monterey County, and Olive Hamilton, a former schoolteacher.  He lived in Salinas until he attended Stanford in 1920, but left in 1925 without receiving a degree.  He then moved to New York to start his writing career, but returned to California in 1928.  He published his first novel, Cup of Gold, in 1929, and married Carol Henning in 1930.  He published a few more works before his first popular success in 1935, Tortilla Flat.  In 1936, he published In Dubious Battle, a labor novel that presaged his next two major works, Of Mice and Men (1937) and The Grapes of Wrath (1939).

The social and political fallout from The Grapes of Wrath was as enormous as the public demand for the novel.  The book was widely banned, and in some cases publicly burned.  His marriage fell apart in 1941, and he remarried a year later to Gwyndolyn Conger, with whom he had two sons, Thomas Steinbeck and John Steinbeck IV (the latter of which was a war correspondent in Vietnam who, partnered with Sean Flynn, son of silent film star Errol Flynn, were among the first to bring the My Lai Massacre to the American public’s attention).

Steinbeck served as a war correspondent in World War Two, and continued writing and publishing both fiction and non-fiction.  In 1948, he and Gwyndolyn divorced.  He married Elaine Scott in 1950.  In 1952, he published East of Eden, often considered his last great novel.  In 1962, Steinbeck was awarded the Nobel Prize for Literature.  In 1967, he visited the warfront in Vietnam as a journalist.  He passed away in 1968 of congestive heart failure.

It’s The Grapes of Wrath.  What can I say about this book that hasn’t been said and said better than I could possibly say it?  For those of you that have forgotten or haven’t read it (a oversight which I recommend be immediately corrected), The Grapes of Wrath follows the Joad family,  a family of farmer’s from Oklahoma, displaced by the economic crash of the Great Depression coupled with the agricultural devastation of the Dust Bowl.  Having lost everything, they head to California where work is rumored to abound.  Subject to unexpected kindness and cruelty, the Joads attempt to create a new life for themselves, as do the hundreds of thousands of other displaced workers and farmers who have sought refuge in California.  While I think a lot of us roll our eyes at the phrase “testament to the human spirit,” I am nothing but sincere when I say that The Grapes of Wrath is a testament to the human spirit and one of the truly great novels of the twentieth century.

Steinbeck managed not just to capture the specific plights and hopes and culture of the time and people he writes about, but he uses these details to connect to a deeper, timeless truth about the human condition and American identity.  The characters are incredibly realistic, the story is absorbing and meaningful, the prose is colloquial and poetic.  This book is a portrait of the time in which Steinbeck wrote it, and is a protest book as much as anything else: a protest against the denigration of the poor, the hypocrisy of the powerful, the denial of the desire for basic human dignity.   The response was to either embrace the book, as many Americans did, or burn it. 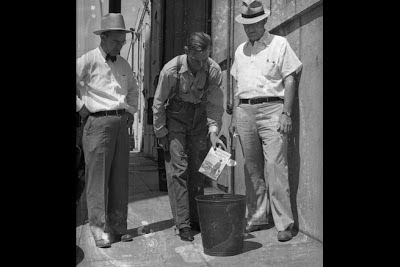 There was an immense negative response from forces in agribusiness, as well as many California localities who resented the way the state and its businesses were depicted.  The above is a publicity photo of farm worker Clell Pruett flanked by two members of the Associated Farmers, an organization of large landowners, as Pruett is about to burn the book.  Understandably, the forces of industry were unhappy with the book, and photos like the one above were used as part of a not-unsuccessful attempt to convince the public that the novel was insulting to the migrant workers.

The fact that The Grapes of Wrath is widely taught in high schools and recognized as one of the definitive “Great American Novels” shows who won in the arena of public opinion.  Zanuck and Ford almost immediately made the now classic film version starring Henry Fonda: 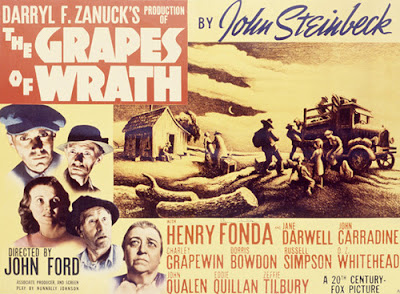 Although it lost the Best Picture Oscar to Hitchcock’s film version of du Maurier’s Rebecca, there’s no question that this remains one of the greatest films, period.


The Grapes of Wrath has a major thematic similarity to many of the other books on this list so far: a glorification of rural and small town life.  Wang Lung’s farm in The Good Earth, Tara in Gone with the Wind, the farm community in So Big.  Even the novels for which this isn’t the primary focus tend to address a prevailing attitude of reverence towards small towns.  Perhaps because this was a dying way of life.  As industrialization loomed, as small farmers became obsolete, as we entered the age where cars replaced horses, and manufacturing replaced farm work, people needed a connection to a world that was rapidly being replaced, who, like the Joads, had to leave their way of life behind and start again in a new world.