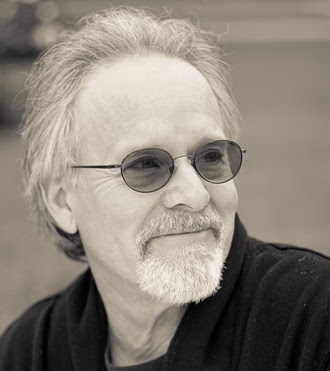 James Kahn (1947-        ), no relation to yours truly, was born in Chicago.  Initially, Kahn pursued a career in medicine.  He received his M.D. from the University of Chicago in 1974 and worked as a trauma specialist.  In 1975 he married Jill Littlewood, an illustrator.  His first publications were a collection of poems written with Jerome McGann, titled Nerves with Patterns (1978) and a mystery novel, Diagnosis: Murder (1978).  After this, he published his best known original work, the New World Trilogy. The first book, World Enough and Time, was published in 1980. The other two were Time's Dark Laughter (1982) and Timefall (1987).  Kahn was briefly a consultant on the set of Spielberg's E.T. He introduced himself to Spielberg personally when he noticed the director had a copy of World Enough and Time. This led to Kahn's writing the novelization of Spielberg's Poltergeist (1982), Return of the Jedi (1983), Indiana Jones and the Temple of Doom (1984), The Goonies (1985), and Poltergeist II (1986).  Since then, Kahn has mostly written for television, working on E/R, St. Elsewhere, Star Trek: The Next Generation, Star Trek: Voyager, Xena, and soap operas like Melrose Place and All My Children. 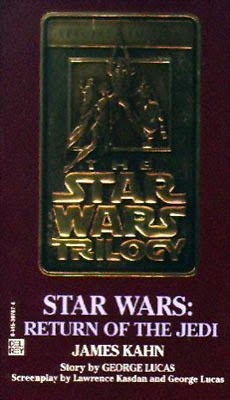 Whereas Kotzwinkle's E.T. filtered the movie through a different perspective, Kahn's Return of the Jedi is pretty much just a narrated version of the film.  Little bits of detail and character background are added in the book (e.g. a bit about Jabba the Hutt's past), but added details about Admiral Akbar don't really add much to the scene.  If nothing else, the novelization should allow for translation of non-English speaking characters, but this is only done to a limited extent.  Throughout the novel we get passages like the following:

Likewise, Chewbacca is still only understood through Han's responses.  Jabba is given a bit more leeway with translation.  Also, there's a rousing speech by an Ewok convincing his people to fight.


I'm having trouble reviewing this book because all it really is is a competent narration of the film.  The differences are negligible, generally taking the form of a paragraph or so of exposition on a character or location.  My advice is: watch the movie.

But of course, in 1983, that wasn't necessarily an option.  In my review of the novelization of E.T., I discussed the high prices of VCR's and the limited film catalog.  Return of the Jedi was not released on VHS until 1986.  Short of going finding a theater that was stills showing it, the only option to re-experience the story was to buy the book.  Which, obviously, a lot of people did.

Long story short, if I were to review the novel on the strength of its characters, plot, etc., I'd basically just be reviewing the film version.  There's nothing particularly noteworthy about Kahn's novelization, good or bad.  If you have a serious desire to watch Return of the Jedi, but for some reason are completely unable to, the novelization will fulfill said desire.  Otherwise, just watch the movie.