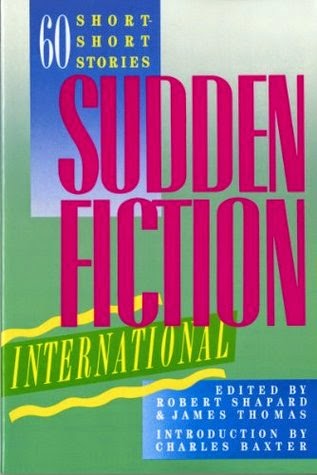 Is this guy reviewing an anthology?  People actually read these if they're not on a syllabus somewhere?  Why?

A good anthology is better than the sum of its parts, and Sudden Fiction International is a good anthology.  The anthology is the follow up to the 1983 anthology, Sudden Fiction: American Short-short Stories (which I haven't read.  I'm a denizen of used bookstores, so when something like the book reviewed here catches my eye, it's not necessarily because of any previous exposure). As the cover clearly states, the anthology contains sixty stories, by sixty different authors from around the world.  This includes big names: Margaret Atwood (Canadian), Donald Barthelme and Joyce Carol Oates (American), Jorge Luis Borges and Julio Cortazar (Argentine), Isak Dinesen (Dutch), Italo Calvino (Italian), and Heirich Böll (German), as well as other famous and lesser known authors from every continent (excluding Antarctica).

With any anthology, there will be stories suited to you own tastes, and some that just don't strike home.  In this anthology, those that fall into the latter category are still strong stories, and worth reading.  The variety of style and content allows the anthology to cover a wide variety of topics, everything from cursed diamonds (On Hope by Spencer Holst), race in the Eastern Bloc (An Insolvable Problem of Genetics by Josef Škvorecký), the end of childhood (Iguana Hunting by Hernán Lara Zavala), or the meta-fictional consequences of squashing cockroaches (The Fifth Story by Clarice Lispecter).

Anthologies are a great way to get introduced to new writers and styles, and you're practically guaranteed to find at least one story that you'd never have read otherwise that fascinates you (for me, this was Dino Buzzati's The Falling Girl and Peter Carey's The Last Days of a Famous Mime).

In addition to the stories, Sudden Fiction International has a section with brief biographies on all the authors, as well as solicited comments on the sudden fiction form (i.e. statements made specifically for this anthology).  Among the bios, there's everything from an additional short-short story, to a brief history of the short-short story in ancient China, to William Weaver explaining the process of translating Cosmicomics, all of which forms an unexpected bonus to an already strong anthology.

If you like very short stories, or want to get introduced to the form, this would be a great choice.