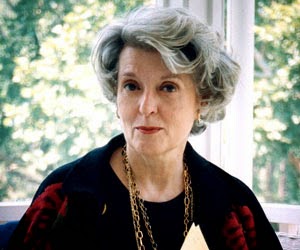 Alexandra Ripley (1934-2004) was born in Charleston, South Carolina, as Alexandra Braid.  She describes her upbringing as that of a Southern belle, who, nonetheless, left the south to attend Vassar college, where she received her B.A. for studying Russian in 1955.  In 1958, she married Leonard Ripley, who she divorced in 1963.  Her first novel, Who's That Lady in the President's Bed? was published in 1972.  In 1981, she published her second novel, a work of historical fiction titled Charleston.  That year, she also married university professor John Graham, with whom she had two daughters.  She published three more historical fiction novels in the 1980s: On Leaving Charleston (1984), The Time Returns (1985), and New Orleans Legacy (1987).  The Mitchell estate tapped Ripley to write Scarlett, the sequel to the classic Gone with the Wind, which was published amid great publicity and controversy in 1991.

After the publication of Scarlett, Ripley wrote two more novels: From Fields of Gold (1994) and A Love Divine (1996).  She died of natural causes at her home in Richmond, Virginia. 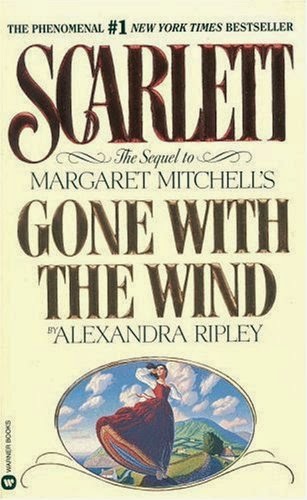 Scarlett takes place soon after the ending of Gone with the Wind.  It opens at Melanie's funeral, where Scarlett finally comes to terms with her past infatuation with Ashley Wilkes and, in preventing Ashley from throwing himself into Melanie's grave, commits a major faux pas, further solidifying her status as a social outcast among Atlanta's elite.  She goes back to Tara for a bit, only to find Mammy dying.  Rhett shows up to see Mammy before she dies, then leaves, telling Scarlett that he'll help maintain the illusion of their marriage, but he doesn't want to see her again.  Scarlett, however, is determined to get him back.  This leads to the rest of the novel, detailing Scarlett's descent in Atlanta's social life, and from there to Rhett's family home in Charleston.  She gets knocked up by Rhett before he leaves again.  Scarlett then goes to live with her father's relatives in Ireland, which is on the verge of its own civil war.  Here she gives birth to a daughter and sets up a new home.

I usually try to avoid giving away the endings in the summaries, but it's important in this case.  Whereas in Gone with the Wind, Rhett and Scarlett's daughter dies, causing Rhett to flee, in Scarlett, they team up to save their second daughter, and then profess their love to each other. Ripley has, essentially, rewritten the close of the first novel, to give it a Hollywood happy ending.  This approach is evident throughout the novel.  Scarlett has become a whiny socialite who thrives on the attention of others.  While she was never a really generous person, in Gone with the Wind, Scarlett's self-centeredness is offset by personal boldness, by determination and ambition, and by the dire necessity of her circumstances, much like Sabra Cravat in Edna Ferber's Cimarron.  Here, all she really cares about is getting her man back.  She's become petulant, with everyone else's success or misfortune considered only in terms of how they affect Scarlett.  Mammy's death hurts Scarlett  most because, as she repeats incessantly, this is when she really needs Mammy's support.  She has no problem associating with nouveau-riche con-men scamming Southerners, until they start scamming "her type of people."   Scarlett has become a typical historical romance heroine, pining for her distant lover.  The word 'simpering' comes up a lot in reviews of this novel.

Basically, Scarlett is Gone with the Wind if Gone with the Wind were content with being a potboiler.  Although, it's not entirely fair to blame Ripley, who has herself admitted to taking the job for the money, arguing that after this, she'd be able to write whatever she wanted.

The fact is, Margaret Mitchell had been vocally against a sequel while alive.  So had her husband, who managed the rights after Mitchell's death in 1949, and her brother after that.  But soon enough, the estate was in the hands of more distant relatives.  An attempt at a film sequel in the mid 1970s got tangled in legal problems and never came to fruition.  Over a decade later, the publication rights to Scarlett were sold at auction, with Warner Bros. paying nearly $5 million. The sequel was the subject of considerable advertising, and the controversy merely fueled public interest upon release, leading a mediocre historical fiction novel by a little-known author to be an international bestseller.

Because the cash-grab that is Scarlett wasn't enough, a miniseries debuted in 1994, starring Joanne Whalley and Timothy Dalton as Scarlett and Rhett. 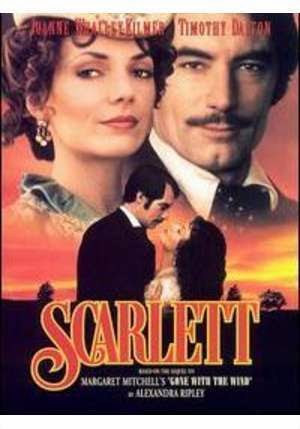 Of course, if one sequel is successful, why not try for another?  In 2007, Donald McCaig's Rhett Butler's People was released.  The novel tells of events before, during, and after Gone with the Wind from Rhett's perspective.  Oh, and McCaig doesn't consider Ripley's novel to be canonical, so he contradicts it whenever possible (which, to be fair, isn't necessarily a bad thing in terms of the quality of the novel, although what it says about the Mitchell estate is less than flattering).

All in all, I can't recommend this book to anyone.  As I've said before, I like to look at the goodreads reviews from readers with an opposite opinion to my own.  Most of the positive reviews fall into the 'wanting closure/a happy ending' category.  If you loved Gone with the Wind, but hated the fact that everything wasn't tied up with a neat bow, if you can't sleep at night because Scarlett didn't get the man of her dreams, if the very idea that a story can live on past the final page gives you migraines, then read Scarlett.  Otherwise, save yourself the time, money, and disdain.

1. Scarlett by Alexandra Ripley
2. The Sum of All Fears by Tom Clancy
3. Needful Things by Stephen King
4. No Greater Love by Danielle Steel
5. Heartbeat by Danielle Steel
6. The Doomsday Conspiracy by Sidney Sheldon
7. The Firm by John Grisham
8. Night Over Water by Ken Follett
9. Remember by Barbara Taylor Bradford
10. Loves Music, Loves to Dance by Mary Higgins Clark