1990: The Plains of Passage by Jean Auel 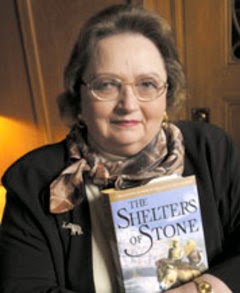 Jean Auel (1936-    ) was born in Chicago as Jean Untinen .  In 1954, she married Ray Auel (pronounced 'owl'), with whom she had five children.  She attended the Portland State University (Oregon), and in 1976 received her M.B.A. from the University of Portland.  From the sixties through the seventies, she worked as a clerk in a tech company and later as a technical writer, before publishing her first novel, The Clan of the Cave Bear (1980), the first book of the six part Earth's Children series and a commercial success.  The second book of the series, The Valley of Horses (1982) sold well, ending up sixth on that year's annual bestseller list, and the third and fourth books take the #1 spot in their respective years.  The fifth book in the series, The Shelters of Stone (2002), appeared seventh on the annual bestseller list, and the series was finished in 2011 with the publication of The Land of Painted Caves.

The novel begins with Ayla and Jondalar, as well as the horses Whinney and Racer and the Wolf named Wolf, continuing on the long journey towards Jondalar's tribe, the Zelandonii.  The novel is largely just a sequence of loosely related events that occur to and around the characters during their travels, and these events mostly serve as excuses for Auel to talk about whatever she finds interesting, regardless of whether it is necessary to any other aspect of the story.  In fact, Auel's desire to inform supersedes all other aspects of the novel, from character to plot to tone to pacing.  This leads to another incredibly frustrating aspect of the novel, which is that most of what happens is characters explaining/talking/wondering about something around them.  And if they don't know, there's a good chance Auel will spend a few pages narrating the answer.  Whether it's the uses of particular shrubs or the mating habits of woolly mammoths, you're going to learn a lot about it, even at the expense of the novel as a coherent whole.

Add to this a fundamental paradox to the entire novel.  Auel's desire to demonstrate the typical world of prehistoric man depends on following a character who is entirely atypical of that time.  I pointed out in my previous review that Ayla has single-handedly made major medical discoveries, as well as being personally responsible for the domestication of animals.  This trend continues, as she here successfully develops the techniques of dog training.  Between Ayla and Jondalar, techniques and discoveries that occurred piecemeal over hundreds and thousands of years are condensed into less than a decade.  I don't plan on reading the fifth and sixth book, but it wouldn't surprise me if they ended up personally inventing the wheel, agriculture, and alphabet.

All this is really a shame, because Auel clearly knows a heck of a lot about her area of expertise.  If she had written a non-fiction account of life in that time and region, it could have been quite good.  But instead we get a novel that is simply tedious.  I'm not a huge fan of the rule "show, don't tell," but I believe you need to do one or the other, not both, which Auel does consistently.  She shows us something then explains it, and vice-versa.

Unless you are completely enrapt by the series up to this point, I can't really recommend it.

1. The Plains of Passage by Jean Auel
2. Four Past Midnight by Stephen King
3. The Burden of Proof by Scott Turow
4. Memories of Midnight by Sidney Sheldon
5. Message from Nam by Danielle Steel
6. The Bourne Ultimatum by Robert Ludlum
7. The Stand by Stephen King
8. Lady Boss by Jackie Collins
9. The Witching Hour by Anne Rice
10. September by Rosemunde Pilcher