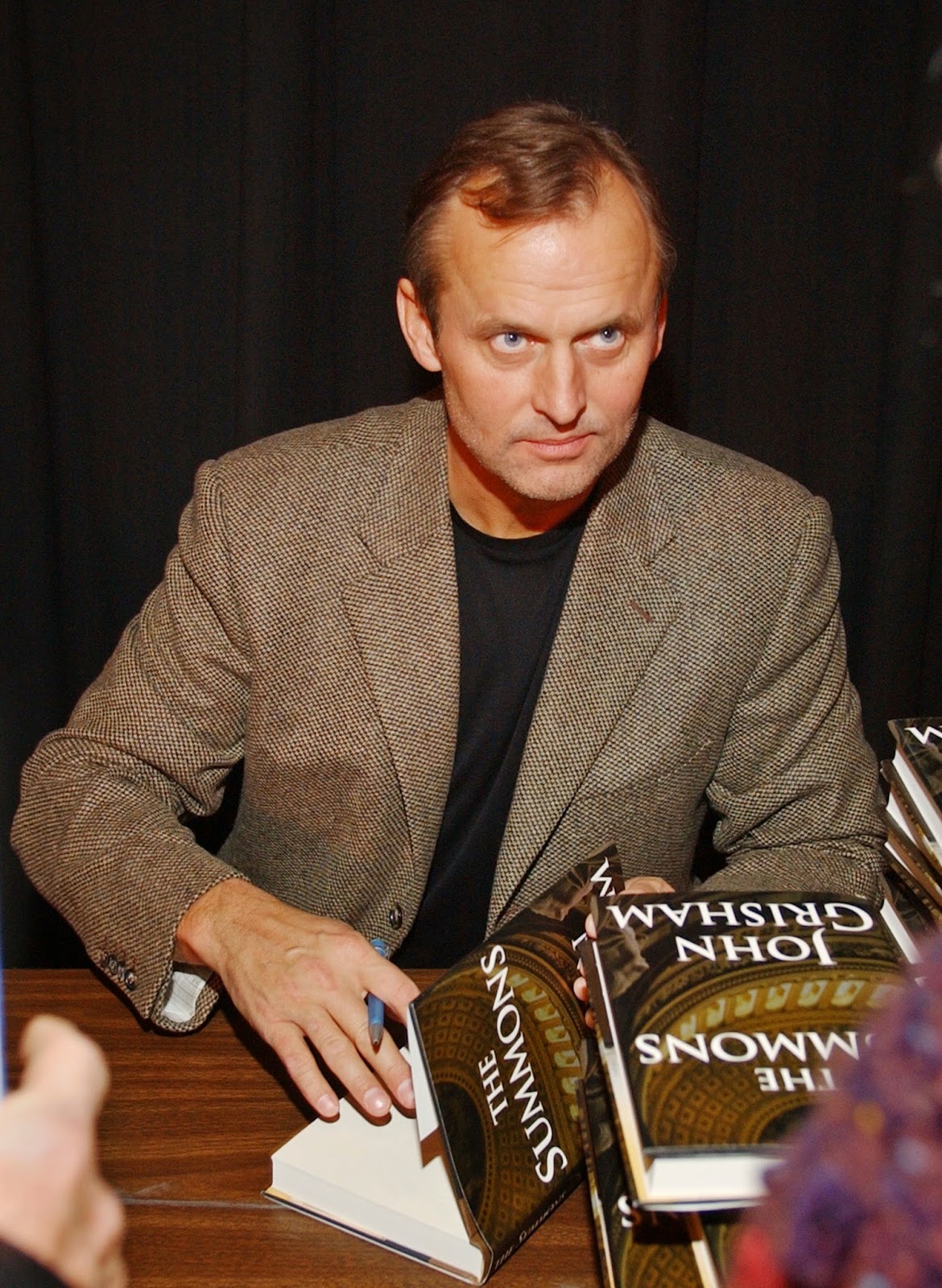 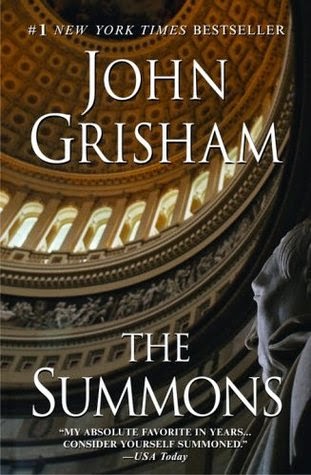 The Summons focuses on Ray Atlee, a law professor at the University of Virginia.  His father, an elderly, dying chancery judge, sends him a summons (like the title.  Get it?!) to come back to Clanton, Mississippi (the setting for other Grisham novels, including The Chamber) to discuss the will.  Ray's addict brother, Forrest, is also sent a summons.  When Ray arrives, his father has already passed away, leaving a handwritten will declaring Ray the executor and asking that everything be split 50/50 between Ray and Forrest.  The family, though descended from southern gentry, was never well off, so imagine Ray's surprise when he finds about three million dollars in cash hidden in his father's house. Just so you know, it takes over seventy pages for the novel to get this far into the story.  There's a lot of brooding about how Ray's father was always so distant, bitter nostalgia about small town Mississippi, and a subplot about Ray's divorce that never goes anywhere.

Anyway, Forrest arrives, and they call the coroner.  Someone tries to break into the house and take the money, but Ray had already moved it.  In fact, much of the rest of the novel details Ray's attempts to hide the money, to find out where it came from, and to figure out who's trying to find the cash.  The first is interesting until it becomes tedious, the second is interesting until the cop-out ending, the third is self-defeating, because the pursuer's method of intimidation (anonymous notes left on his car, etc.) show that he knows where Ray is, but won't harm him.  Because with the information  we know the pursuer has, he could just shove Ray into the back of a van and get him to say where the money is. That the pursuer can, but doesn't, do anything like that, tells me as a reader that he's not a serious threat, which of course leads up to a pointless twist ending.

This novel is just tedious.  Ray spends half his time drenching himself in nostalgia and recriminations.  His quest for the source of his father's money is mostly comprised of dead ends, but that's only because he waits until the very end of the book to look through his father's papers.  Ray points out again and again his father's annoying habit of keeping pretty much every document for the last fifty years of his life, but for some reason doesn't bother to check the papers for clues, clues which he finds on his first day of looking, and which leads him directly to the source of the money.  There's no reason Ray didn't check the papers first, except that over 100 pages of useless investigating would have to be cut from the manuscript.  This novel had no idea what it was supposed to be.  A nostalgic reflection on small town life and family?  A mystery novel about a mysterious three million and the people chasing after it?  A legal thriller about the difficulties of hiding and laundering a large sum of money?  Well, Grisham tried to do them all at once, and it didn't really work.

1. The Summons by John Grisham
2. Red Rabbit by Tom Clancy
3. The Remnant by Jerry B. Jenkins and Tim LaHaye
4. The Lovely Bones by Alice Sebold
5. Prey by Michael Crichton
6. Skipping Christmas by John Grisham
7. The Shelters of Stone by Jean Auel
8. Four Blind Mice by James Patterson
9. Everything's Eventual: 14 Dark Tales by Stephen King
10. The Nanny Diaries by Emma McLaughlin and Nicola Kraus

Middlesex by Jeffrey Eugenides
Kafka on the Shore by Haruki Murakami