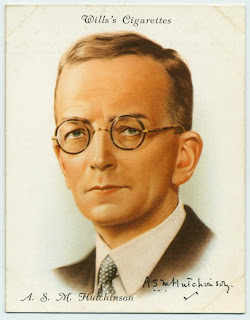 Who?
Arthur Stuart-Menteth Hutchinson (1879-1971) was born in British India.   His father was a General and his mother was a Scottish noble.  He was expected to go into the military as his brothers did, but was rejected due to his poor eyesight and instead chose to study medicine in London.  He dropped out of medical school and became a journalist in London until the outbreak of World War One, in which he served with Royal Engineers and a Canadian tunneling company.  After the war, he wrote his first success, If Winter Comes.  He continued writing through the 1940’s with some commercial success.  He married in 1926 and moved to Eastbourne where he started a family.

(Unfortunately, information on Hutchinson’s later life has been hard to find.)

So what's this book about?
If Winter Comes follows the life of Mark Sabre from 1912 through 1919.  The story takes place in an English suburb and focuses on the deterioration of Sabre’s marriage and career, in large part due to Sabre’s inability to adopt the worldview of the suburbanites, including his wife.  Throughout the story, Sabre is reunited with his real love, the Lady Tybar, and deals with changes resulting from World War One.  The book’s title comes from the last lines of Percy Bysshe Shelley’s Ode to the West Wind, “Oh Wind,/ If winter comes, can spring be far behind?”  And, in much the same way that nature destroys and replenishes, so does Sabre’s life fall apart and reconstruct.

There is no doubt that we should be rooting for Sabre throughout, and to this end, his wife, Mabel, is unlikable.  My biggest problem with this book is that I can find no reason why Mabel and Sabre ever got married in the first place.  There is nothing about their relationship before they got married, and from day one they don’t really get along.  It seems like a marriage of convenience; convenience for the author, not the characters.   On that note, most of the characters opposed to Sabre are unequivocally mean, and Sabre’s friends are all ‘good.’  In many ways, this is a romance about a man trapped between what he feels is his duty (e.g. staying with his wife, serving his country, etc.) and what he wants for himself.  As a romance, or a story or redemption through virtue, If Winter Comes is successful.

What made it so popular?
If Winter Comes became popular in Britain before making the leap across the Atlantic.  Not only did the novel benefit from word of mouth advertising, but the controversial plot elements managed to pique the public’s interest, elements that set the tone of disillusionment generally considered characteristic of literature during and after World War One.

Why haven't I heard of it?
The elements that were controversial enough to garner the novel attention at the time have since lost their shock factor. And while If Winter Comes is an enjoyable read, there is nothing particularly transcendent about it that would put it in the realm of classics.  It was made into two films, the first in 1923 and the second in 1947, but since then has not had much of a presence in popular culture. 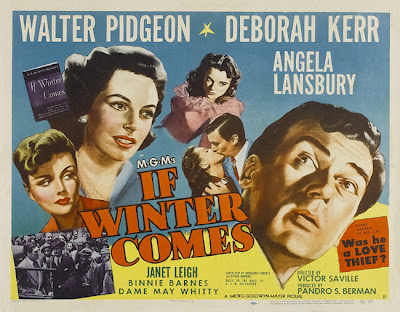 Should I read it?
If you like romance, then you’ll probably enjoy If Winter Comes.

You can read If Winter Comes on Project Gutenberg.