1938: The Yearling by Marjorie Kinnan Rawlings 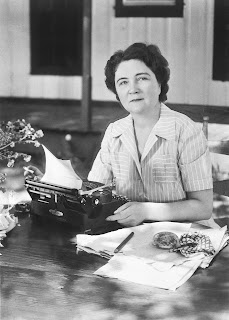 Marjorie Kinnan Rawlings (1896-1953) was born Marjorie Kinnan in Washington D.C.  where her father worked in the U.S. Patent Office.  She began writing at a young age, winning a $2.00 prize from the Washington Post at the age of eleven.  After her father’s death in 1913, Rawlings and her mother and brother moved to Madison, Wisconsin.  She attended the University of Wisconsin as an English Major in 1914.  Upon graduating in 1918, she moved to New York City to work as an editor with the YWCA.  She married Charles Rawlings, whom she had known in Wisconsin, in 1919, and moved to Charles Rawlings’ hometown of Rochester, New York.

From 1920 until 1928, she wrote as a columnist for the Louisville Courier-Journal and the Rochester Journal-American.  Despite her attempts, Rawlings was unable to get any fiction published at that time.  Professional stress for bother her and her husband, combined with increasing tension within the marriage, prompted them to buy a farm in Cross Creek, Florida in 1928.
She sold her first story in 1930, and published several more before her first novel, South Moon Under, was published in 1933.  It was a finalist for the Pulitzer Prize and selected for the Book-of-the-Month club.  Her marriage ended later that year.

She published The Yearling in 1938, winning the Pulitzer Prize for fiction and establishing her literary career.  In 1941, she married hotelier Norton Baskin and moved from Cross Creek to his home in St. Augustine Florida.  Her novel, Cross Creek, was published in 1942.  Zelma Cason, a friend from Cross Creek, sued her for $100,000 for libel (the suit was later changed to ‘invasion of privacy’).  The case was not settled until 1947, after a very publicized trial in 1946 found in favor of Rawlings, the Florida Supreme Court reversed the decision 3-4, requiring Rawlings to pay a token settlement of $1 to Cason, and to cover Cason’s legal fees of over $1,000.

She published a couple more novels before her death in 1953. 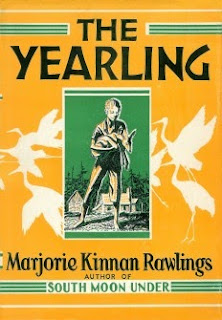 The Yearling takes place over the course of a year in the life of a family living in the wilderness in Florida.  The family consists of twelve year old Jody Baxter, and his parents, usually referred to as Ma and Pa Baxter.  Over the course of a year (a year sometime in the late 19th century), Jody faces the challenges of life in the wild and of his own impending adulthood.  This is a coming-of-age story that really gets you into the mind of the protagonist as his role in the world changes.

The setting and life style that the Baxters lead is at times appealing or appalling.  The majesty of nature as Jody and Pa hike through the practically undisturbed forest is offset by the gore and terror of the hunting dogs ripping into a bear, all of which is rendered in vivid language.
As much a portrait of the setting as it is a tale about people, The Yearling makes the two inseparable.  The deep connection the characters have with the land and their way of life permeates all the events in the story.  Perhaps that’s why a book describing a way of life so alien to most of us can still connect with us emotionally.  In a lot of ways, it reminds me of Wilson Rawls’s Where the Red Fern Grows.  It’s a story about youth and innocence, and about adulthood and experience.  It’s a story about people, and it’s a story about a specific time and place in America.

The Yearling well-received by audiences and critics, winning the Pulitzer for fiction in 1939.  A film version was released in 1946, with Jane Wyman and Gregory Peck as Ma and Pa Baxter. 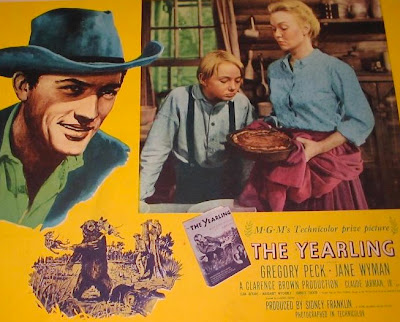 The film won two Oscars and was nominated for several more and, though it maintains a 100% fresh rating on Rotten Tomatoes, has faded from popularity.  Maybe Where the Red Fern Grows has cornered the market for wilderness-family coming-of-age stories.


If youthful-boy-moving-towards-adulthood stories aren’t something you can enjoy, this wouldn’t be the right book for you.  Otherwise, it’s a nice story with a strong emotional current.